May 2018 Feature – Arc to Arcturus and Speed on to Spica 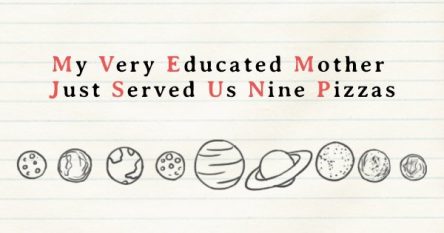 Mnemonic devices are useful memory tools and astronomy is certainly no stranger to them. In elementary school many of us of a certain age learned the order of the planets of our solar system with this bit of doggerel: “My Very Educated Mother Just Served Us Nine Pizzas”. The first letter of each word cues us to the order of these worlds: Mercury, Venus, Earth, Mars, Jupiter, Saturn, Uranus, Neptune and Pluto (I did say, “those of us of a certain age”).

Similarly, freshman astronomy students are taught to remember the proper order of the spectral classification of stars with: “Oh Be A Fine Gal/Guy, Kiss Me”. This system of capital letters (first invented by astronomer Annie Jump Cannon, a distant relative of former UALR history professor Grant Cooper) is used to denote the surface temperatures of the stars from hottest to coolest: O,B,A,F,G,K, and M.

Scouts also have a mnemonic phrase for learning how to use the Big Dipper to navigate their way to two bright stars in the spring and early summer evening sky: “Arc to Arcturus, speed on to Spica (or, “drive a spike to Spica”)”.

You and I are now going to make use of this mnemonic to locate these two lovely stars in our night sky tonight. So, let’s step outside on this May evening and get busy looking up. 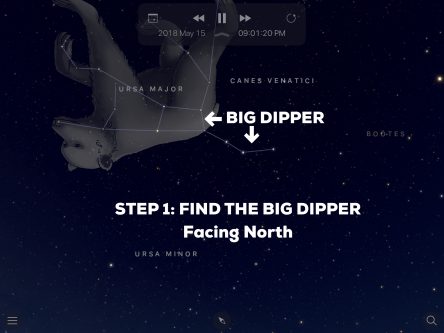 Let’s synchronize our watches for 9:00 P.M., any clear night this month. Go outside at this time and face north to find the Big Dipper. At this time of night, at this time of the year, the Big Dipper appears upside down, with its bowl turned down and the handle arcing off to the east. The Dipper’s handle is made up of three stars, starting from the direction of the bowl to the tip of the handle, they are: Alioth, Mizar, and Alkaid. 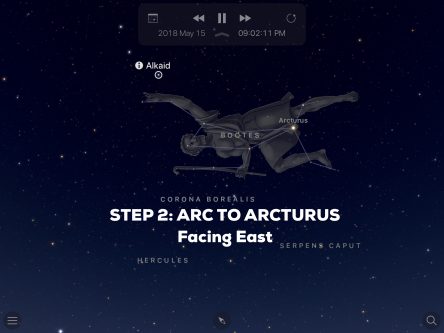 Notice again how the handle is in the shape of an arc. Starting with Alkaid, I want you to extend the arc of the handle outwards for another full Dipper’s length (about 30 degrees, or three fist widths held out at arm’s length) until you come to the next brightest star in this part of the sky. Not only will you notice that it’s the brightest star in our night sky right now (outside of Sirius, which is just now setting in the west), you will also see that it is orange-yellow in color. Congratulations, you have “arced to Arcturus”, the alpha star in the constellation of Bootes (pronounced bow-oh-tees), the herdsman! Arcturus is halfway up the sky, above the eastern horizon. 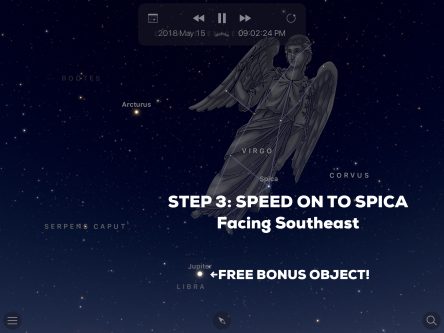 STEP 3: SPEED ON TO SPICA

Now, extend the arc out again (for another approximate 30 degrees) in a line from Arcturus towards the southeast until you come to a somewhat dimmer, blue star. You have just “sped on to Spica” (pronounced either as “speak-ah” or as “spy-kah”), the alpha star in Virgo, the virgin. While Spica is well above the southeastern horizon it is not quite as high up yet as Arcturus is right now.

But wait, there’s more! As an added bonus you will find that there is another very bright object in the sky (and if the moon is up, I’m not talking about it). About 25 or 30 degrees below Spica, and back towards the east, there is another very bright star in this part of the sky. Except it isn’t really a star, it’s the planet Jupiter! If you have a pair of binoculars be sure to use them on Jupiter, you can see up to four of its large moons orbiting around it. With a small telescope you should be able to see the gas giant’s bands and, if you have really good seeing conditions (and luck) you might just see the Great Red Spot. 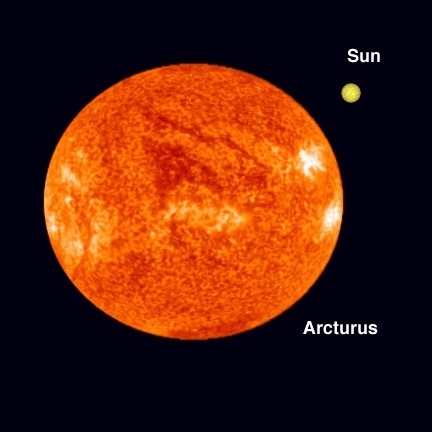 Arcturus is a name from Ancient Greece, meaning “the bear guardian”, which can no doubt be attributed to the fact that it hangs out so close to the constellations of Ursa Major and Ursa Minor, the Big and Little Bears. To the Shawnee Native Americans, who once lived here in Arkansas as immigrants, at the invitation of the Cherokee after the Treaty of 1817 established the Cherokee Nation in the Ozarks, Arcturus was said to represent a great hunter they called “White Hawk”.

Arcturus is the fourth brightest star as viewed from here on Earth with an apparent magnitude of -0.04 and is located some 37 light years away. Astronomers have assigned Arcturus the spectral class designation K, which tells us that it is an orange giant with a relatively cool surface temperature of about 4,290 Kelvin (by comparison, the Sun’s surface temperature is about 5,778 Kelvin, the Sun’s spectral class is G). Arcturus is a geriatric star, nearing the end of its life. It has stopped fusing hydrogen within its core, the fuel that stars in their prime, like the Sun, are fusing, and has now probably moved on to fusing elements like carbon. Orange giants like Arcturus are also very bloated stars, as their outer layers puff up during this stage of their lives. This means that Arcturus is some 25 times the size of the Sun, much of it as tenuous outer gas layers. This huge increase in the star’s surface area also makes it brighter, and Arcturus shines about 110 times brighter in visible light than does our Sun.

While controversial, there are some astronomers who, based upon their observations of the star’s motions and measurements of its chemical make-up, believe that Arcturus is an alien star. That is, a star that did not originate within our own Galaxy but is part of a dwarf galaxy that the Milky Way has cannibalized.

Arcturus lies right along the celestial equator, an imaginary line that represents the Earth’s equator projected out upon the dome of the sky.   The celestial equator is a handy reference point upon the sky for stargazers as it serves to divide the sky into both northern and southern hemispheres. 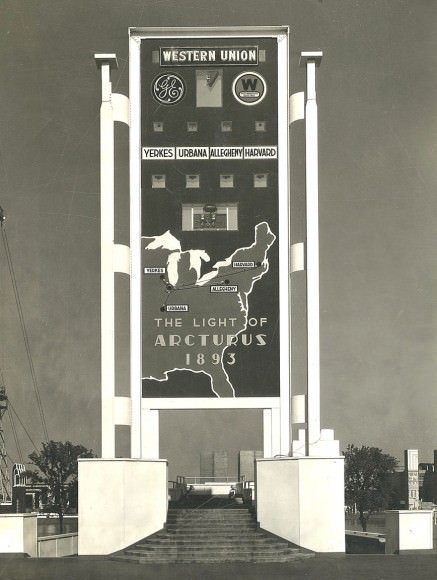 Be sure and take a look at Arcturus with binoculars or a small telescope to really appreciate its orange color. Interestingly, the 1933 World’s Fair in Chicago used the light from Arcturus to activate a photocell that then triggered a switch that turned on the lights to the fairground on the fair’s opening night. At the time, the best estimate for Arcturus’ distance from Earth was 40 light years. The first World’s Fair had taken place 40 years previously, in 1893. Astronomer Edwin Frost of the Yerkes Observatory saw a golden opportunity here and he suggested the gimmick of using the light from the star to trigger the photocell and switch. Star power indeed!

The name Spica is from the Latin and means “an ear of wheat”. In some tales of Greek Mythology, Virgo is said to represent the goddess of justice, while in others she is said to be the goddess of agriculture. In most representations she appears to be the latter as she is often depicted holding an ear of wheat in her left hand, denoted by the star Spica. In Chinese mythology, Spica is said to be “The Special Star of Springtime”. To Zuni Native Americans, the star was a part of a constellation they called, “The Chief of the Night”. 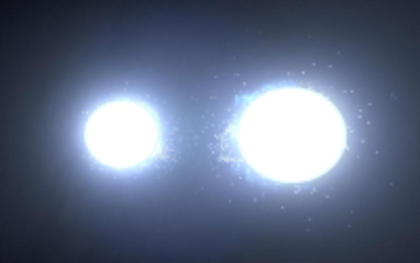 Spica is the 15th brightest star in our sky, shining with an apparent magnitude of either 0.9 or 1.2, the range in brightness is attributed to the fact that Spica is a star whose luminosity varies over time. Spica is located at a distance of 262 light years from Earth.   However, Spica’s blue-white light is not from just one star, it’s from two. Spica is a binary system but don’t expect to be able to split them apart with a telescope. The two stars are only 0.12 Astronomical Units apart (one A.U. is equal to the average Earth-Sun distance of 93 million miles) and orbit around one another in just 4.0145 days.   At such close range, the stars have a very strong gravitational interaction with one another and they tidally distort each other’s spheres. It is this interaction that accounts, in part, for why Spica fluctuates in brightness. Spica A and B are both classified as B-type stars and are very hot, with surface temperatures of 22,400 Kelvin and 18,500 Kelvin respectively.   The primary component has a luminosity of some 12,100 Suns while the secondary shines with the power of 1500 Suns.

Both components are still happily fusing hydrogen within their cores but massive stars such as these live fast and die young and at some point, in the future, say a few million years or so from now, Spica A’s core will run out of fuel and it will collapse, triggering a violent supernova event known as a Type IIa. This is the closest star to Earth that will end its life in this particular way. 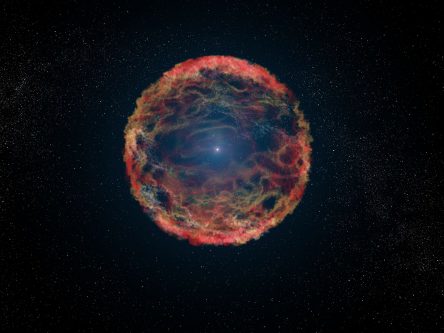 Spica sits within the ecliptic, an imaginary line upon the sky which represents the plane of our solar system. It is the apparent path upon the sky through which the Sun, moon, and planets travel. In fact, the moon will often eclipse (or, “occult”) Spica from time to time, something you can watch happen whenever it occurs (watch the Highlights of the Month column to find possible dates when these occultation events happen). The ecliptic is also where you find the constellations of the Zodiac.

Spring evenings are a lovely time for getting outside and appreciating the wonders overhead and if you know a little bit more about the things that you are looking at, I think that you will discover that you appreciate them all the more.