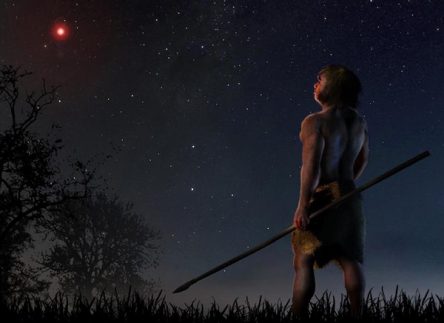 Astronomy is perhaps the oldest of the sciences. Ever since our distant ancestors were capable of looking up at the night sky and wondering what those points of light in the darkness were, we became, in essence, astronomers.   Of course, it would be millennia before we could know that stars were distant suns, shining brightly due to thermonuclear reactions taking place deep within their cores, but even very early on we had begun to notice that the motions of the stars across the dome of the sky were both regular and predictable. From that simple observation we could then mark the passage of time, create calendars, record our history, and know in advance when the seasons would change. The latter ability was vitally important when we learned to domesticate food plants. Knowing when the right time to plant or harvest crops was literally a matter of life and death for the farmer and all who depended on the bounty of his efforts.   Our ability to successfully transition from hunter-gatherers to an agrarian society allowed us to build communities, towns, and cities. In short, one could reasonably argue that by watching the sky, humans were able to build civilizations.

June 21st is the day of the Summer Solstice, the first day of summer, but there is a familiar pattern of stars that has been edging its way up over the eastern horizon at around midnight since spring, a star pattern that clearly signifies that long hot days and short muggy nights are on the way, and this month it finally comes into its own in our evening sky.   This pattern of three stars traces out a giant isosceles triangle in the sky and we call it, appropriately enough, the Summer Triangle. 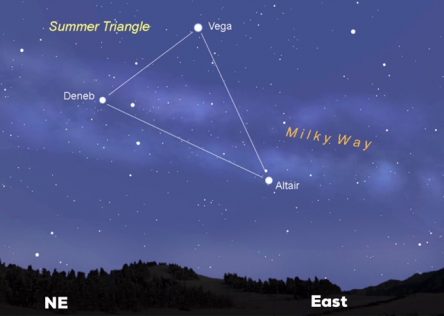 During the first half of the month, the Summer Triangle doesn’t clear the eastern horizon until around midnight but by mid-month, you should be able to find it high enough in the sky to spot it by around 10pm.

If you are in any doubt, just remember that these three stars are the brightest ones occupying this region of the sky right now and all are bright enough to make their presence known even within most light-polluted areas. 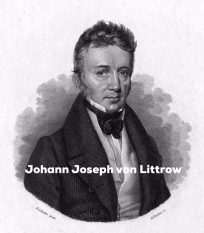 The fact that the Summer Triangle is made up of three stars from three of the standard constellations of antiquity, tells us that it is not itself an officially recognized pattern of stars. Instead, it is an informal grouping of stars known as an “asterism”.    The first association of these stars with the shape of a triangle can be found within the pages of Austrian astronomer Johann Joseph von Littrow’s 1839 book, “Atlas of the Starry Heavens”.   But it was British astronomer, Sir Patrick Moore, who really began to popularize the name “Summer Triangle” to the general public via his many books, magazine articles, and episodes of the BBC television series, “The Sky at Night”. 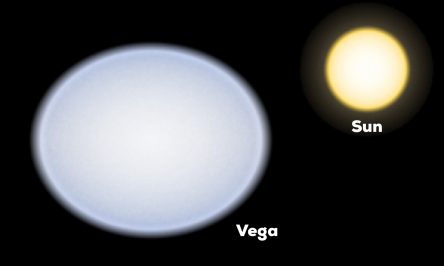 Blue-white Vega shines brilliantly at a magnitude of 0.03 and is located 25 light years away. The star has a diameter 2.75 times that of our Sun and a surface temperature of nearly 17,000 degrees Fahrenheit, a lot toastier than our 10,000-degree Fahrenheit Sun. Among the Hit Parade of Brightest Stars in our night sky, Vega comes in at #5.

Had you been around some 14,000 years ago and looked north, you would have seen Vega as the pole star. Our planet wobbles upon its axis just like a spinning top but it takes quite a while for the Earth to complete one wobble, something like 26,000 years in fact. This has the effect of making our celestial poles point to different areas of the sky and, so, we get different pole stars over time. Today, the star Polaris happens to line up pretty closely with our North Celestial Pole. Come back in another 12,000 years and you will again see Vega pointing your way north. 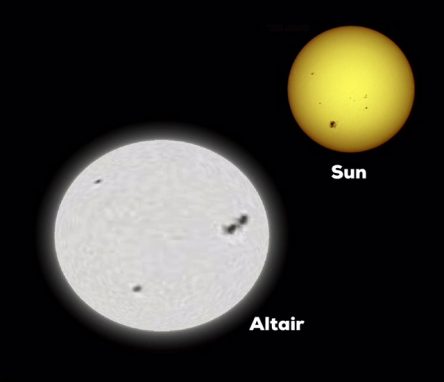 Altair, the star that marks the eye of Aquila, the Eagle, is the closest of these three stars to planet Earth at a distance of only 17 light years.   All three stars in the triangle are white in color as well as being both bigger and hotter than the Sun. However, Altair is the coolest and the dimmest of the three. Its surface temperature is about 13,000 degrees Fahrenheit and it is some 11 times brighter than the Sun.   From Earth, we see it as a 0.76 magnitude star, and Altair is the 12th brightest star in our night sky.

Altair is what’s known as a “rapid rotator”. While it takes almost a month for our Sun to rotate once upon its axis, Altair does it in about 9 hours, a bit longer than the length of your average work day. This rapid spin tends to make Altair flattened at the poles and a bit bulgy in the mid-section. Something I can relate to whenever I look in the mirror these days. 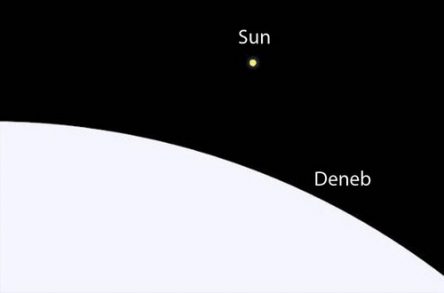 Deneb, the star that denotes the tail of Cygnus, the Swan has an apparent magnitude of 1.3 and ranks as the 20th brightest star in our night sky. But here’s the kicker, Deneb is over 1,000 light years away. Look back at Vega and Altair again, they are both relatively close-by as stars go. To be honest, we don’t know exactly how far away Deneb actually is. Some estimates place it at around 1,000 light years away and others at 3,000 or more light years. The 1,000 light year distance is the result of some more refined data obtained in recent years so that is the one I will stick with for now. Either way you look at it, Deneb is one of the most distant naked-eye stars in our night sky and in order for it to be so conspicuous over such a huge distance means that it must be a real powerhouse. By some estimates, Deneb could well be 200 times wider than our own Sun and some 200,000 times brighter.

While the Summer Triangle is just now coming into view in the east during the late evening, as the summer progresses, the star pattern will shift more and more towards the west as the nights go by. Come August, look for the Summer Triangle practically overhead. By the time fall arrives it will have migrated into the western half of the sky by early evening and you can see it right up until mid-December. 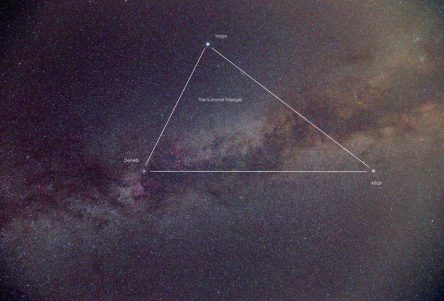 For an added bonus, if your skies are sufficiently dark, you will see that the summer Milky Way passes right through the triangle. Be sure and use a pair of binoculars to sweep along the Milky Way’s length to really take in all of its starry splendor.

As you no doubt know, the night sky is something like a time machine. Light travels at the finite speed of about 186,000 miles per second. Over one year, a beam of light will have traveled some 6 trillion miles. This is the very definition of a light year. So, given the vast distances of the stars, whenever you look up at them you are effectively seeing them as they were dozens, hundreds, or even thousands of years ago, never as they are right this very moment. Whenever I give public astronomy presentations during the summer, I like to use the stars of the Summer Triangle as a sort of “way back machine” and allow my audience to travel back in time with me.

For example, Vega is 25 light years away. That means that when we look up at it, the light coming from Vega has been traveling for 25 years before it’s photons enter through our pupils and bounce around in the back of our eyeballs. This being 2018, let’s head back to 1993 and see what was going on then. 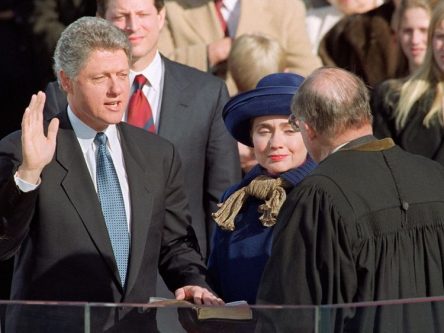 In 1993, the Yearly Inflation Rate here in the USA was at 2.96% (it’s currently right around 2.5%), a movie ticket cost $4.14 while a new car averaged around $12,750. Bill Clinton was sworn in as our 42nd president, the World Wide Web, invented by a British scientist at CERN, had its software in the public domain (we’ve never been the same since), and Ruth Bader Ginsburg was appointed to the United States Supreme Court.

The biggest movies for 1993 included “Jurassic Park”, “Sleepless in Seattle”, and “Schindler’s List”. While the Billboard Top 100 Song of 1993 was “I Will Always Love You” by Whitney Houston.

Turning our gaze towards Altair, we are traveling back in time to 2002. Our president was George W. Bush and former president Jimmy Carter won the Nobel Peace Prize.   Gas prices were at $1.61 a gallon while a new house would have cost an average of $228,700. Some of the biggest films for that year were “The Lord of the Rings: The Two Towers”, “My Big Fat Greek Wedding” and “Gangs of New York”, and the most popular song on Billboard’s Top 100 list was “How You Remind Me” by Nickleback. 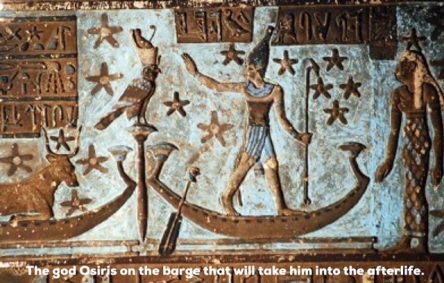 Looking upwards at Deneb the light that you are seeing either left the star 1,000 years ago, during the Middle Ages, or, if you choose to go with the 3,000 light year distant estimate, those photons began their journey when the world’s first complex societies were taking shape in the Near East, Egypt and various parts of Asia. And I will just point out that many of these ancient civilizations were using astronomical observations to establish their calendars. The Egyptians for example based their calendars upon the motions of the star Sirius, the brightest star in our night sky. Whenever the Egyptians observed Sirius rising before the Sun, they knew it was that time of the year when the life-giving Nile River would flood. No wonder then that the Egyptians associated Sirius with Osiris, the god of life, fertility, death, and rebirth.

Stargazing today may not be as important a pastime as it was for our ancient ancestors, but whenever we do engage with the sky, we are able to connect with the past in ways that we may never have thought we could.