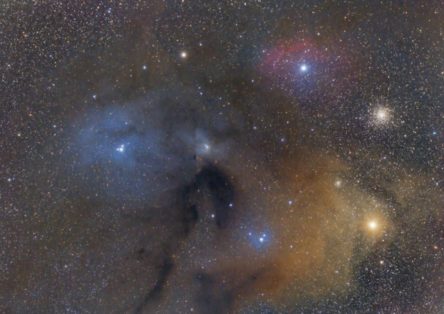 The universe is filled with a multitude of wonder and beauty, but, in my opinion, the most wondrous and beautiful of all celestial objects must surely be star forming nebulas. This month, I want to show you a photograph of one such place within the universe and it is known as the Rho Ophiuchi Cloud Complex. There it is at the top of this article. Isn’t it beautiful? Now, before we go any further, I want you to know that this photo was not taken with any kind of NASA space-based telescope, it was taken from right here in central Arkansas by my friend and fellow Central Arkansas Astronomical Society member, Danny Flippo. The photograph was taken at the CAAS River Ridge Observatory, on the night of July 26th, 2019, near the small town of Bigelow, AR.

Amateur astronomers come in many flavors. Well, not literally of course. 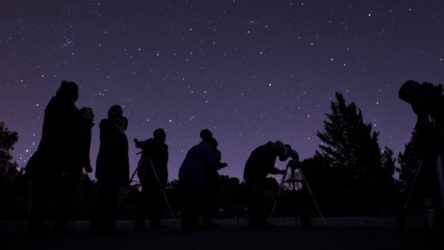 What I mean is that the hobby offers a diverse array of activities and pursuits that one can follow. Some amateur astronomers, such as me, are general observers. We general observers like taking a telescope outside every now and again and just looking at the moon, planets, stars, star clusters, nebulae, galaxies and such. Some of us are kind of casual with it while others prefer to work from one or more different astronomical catalogs. Some amateur astronomers love getting involved in scientific projects that aid professional astronomers in gathering data on variable stars or near-Earth asteroids and comets.

Still another flavor of amateur astronomer loves doing outreach with the local community (again, me). It’s perfectly okay to involve yourself in any number of these different activities. Then there are the amateur astronomers who love to image the sky. These people are very gadget oriented. 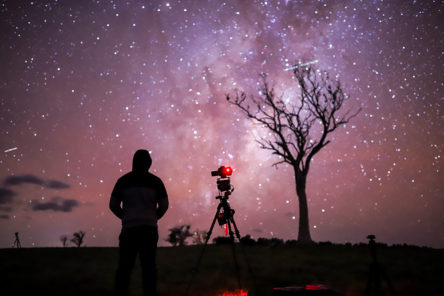 They enjoy playing around with the cameras, telescope rigs, and computer programs that allow them to gather raw image data and then turn it into a visual wonder. Danny is one of several of our club members who enjoy this aspect of the hobby. Not anyone can jump right into this particular pursuit.   If you get too deep into it you can easily break your bank account and you must be willing to endure a steep learning curve in order to get images as good as Danny’s. I’m not going to provide you with a tutorial on astrophotography (mainly because I just don’t know enough about it), but I do want to go over some of the cool things revealed within the image that Danny has captured of Rho Ophiuchi and its surroundings. 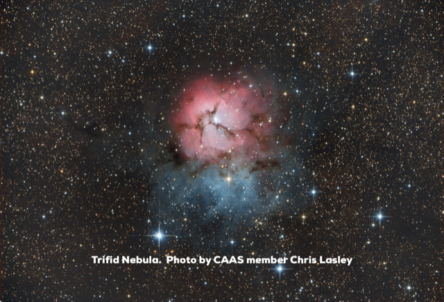 The word “nebula” is the Latin word for “cloud” and in astronomer parlance, it has come to refer to interstellar clouds composed of gas and dust. These interstellar clouds are places where either star birth is occurring or where stars have died or are in the process of dying.

If you were to go outside on a summer’s evening and you wanted to know where to look in order to find this cloud complex, then I would direct your gaze towards the orange star Antares 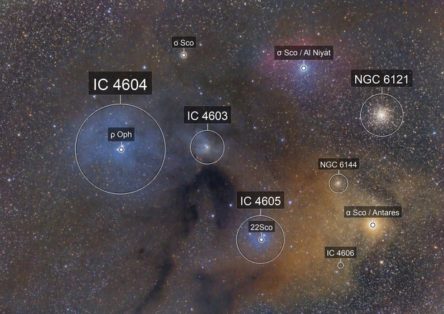 in the southern sky constellation of Scorpius and then just immediately eastwards of the star into the neighboring constellation of Ophiuchus, the snake bearer.   The Rho Ophiuchi Cloud Complex is located some 460 light years from Earth, making it the nearest star-forming region to our very own solar system.   You might be able to see some of the cloud complex’s features with a small backyard telescope (under dark sky conditions) but its true nature is best appreciated with a long exposure photograph like Danny’s.

Let’s begin our tour of the Rho Ophiuchi Cloud Complex with Antares (a.ka. “the heart of the scorpion”).   You can see Antares, labeled “Alpha Sco” (with the Greek letter alpha)/Antares, in the lower right of the image. It’s a yellow-orange star surrounded by nebulosity. Antares, the brightest star in the constellation of Scorpius, is a red supergiant star, such stars are geriatrics, nearing the end of their lives. The star has depleted the fuel supply of hydrogen within its core and has now bloated outwards to monstrous proportions. If you could replace our own Sun with Antares, its tenuous outer layers would stretch all the way out to the orbit of Mars. As it goes through its death throes, the star has expelled a lot of its mass as shells of gas and dust into space. Dying stars such as Antares increase their luminosity as they swell outwards and become a yellowish, orange-red color. The nebulosity surrounding Antares is created by those sluffed off layers of gas and dust and it is the fine-grained dust that we see reflecting the dying star’s yellowish light.

Above and to the left of Antares you will find NGC 6144, a globular cluster of stars. NGC 6144 is not a part of the cluster since it is located a whopping 33,000 light years away. Globular clusters are massive, tightly packed spheres that contain thousands, or even hundreds of thousands, of individual stars. The combined star power of all of those stellar furnaces is still capable of making their presence known through the murk of Antares’s shed off layers, despite being 33,000 light years away. 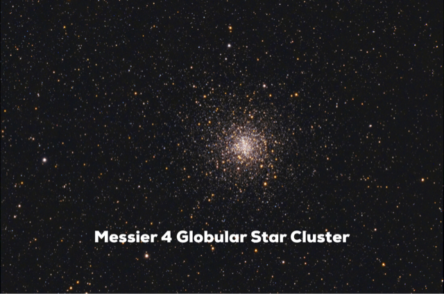 Much closer to home is yet another globular cluster, NGC 6121 (Messier 4), located only a hop, skip, and a jump away from Earth at a distance of 7,200 light years. This cluster can easily be seen with a small backyard telescope as a fuzzy patch of starlight and will begin to resolve itself into individual stars with larger instruments. NGC 6121 can be seen just above and to the left of Antares.

Now we are going to turn our gaze to the left-hand side of Danny’s photo, to IC 4604. This is where we find the Rho Ophiuchus nebula proper. You will note that the label denotes the star Rho Ophiuchi in the center of the nebulosity. 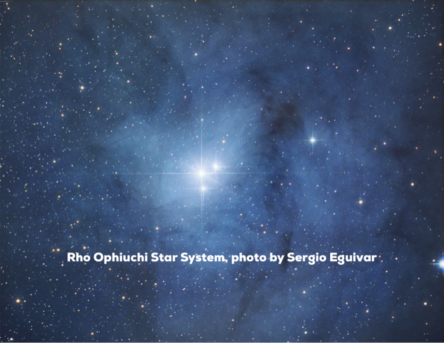 The star is not just one star, it seems to be at least a 3-star system and it is the light from these stars that we see highlighting the features of the nebula.   IC 4604 is an example of what is known as a “reflection nebula”.   We just saw the same thing going on with the clouds of dust and gas around Antares but in this case, the light being reflected back at us is blue, not yellow. You only have to look up at the daytime sky to understand why.   In the same way that molecules in our atmosphere preferentially scatter the bluer portions of the Sun’s light, so too do the dust grains that make up IC 4604 scatter the light emanating from the stars of Rho Ophiuchi. If you want to amaze and impress your friends, the term for the process that makes our sky blue is called, “Rayleigh Scattering”. IC 4603 and IC 4605 are two other examples of reflection nebulae that you can see within the image. 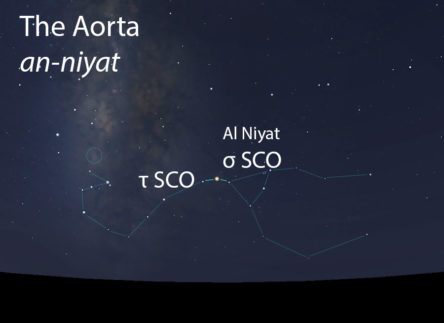 The counterpart to a reflection nebula is an “emission nebula” and to see an example of that, I need to redirect your gaze back to the right-hand side of the image.   We are looking for the label Sigma Sco/Al Niyat.   The name Al Niyat comes to us from ancient Arabic astronomers and means, “the arteries”. Seeing as how these stars flank Antares, “the heart of the scorpion”, it only makes sense that they could be viewed as the arteries of that colossal, dying heart. Sigma Scorpii/Al Niyat is another multiple star system and these hot, young stars are emitting a lot of UV radiation.   As this high energy UV light hits the hydrogen atoms it energizes them, and the electrons separate from the atomic nucleus. When they recombine, the electrons give off a reddish-pink light and the gas cloud glows. 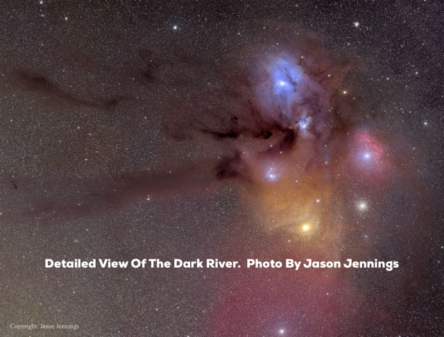 Looking left of center in Danny’s photo and we see something dark and mysterious, this is a portion of what is known as the Dark River, an example of a…wait for it…”dark nebula”. Dark nebulae are places where the cold clouds of hydrogen gas have become so dense that they block the light from any stars that are in the background. Dark nebulae are future sites where new stars will be formed. In this case, the Dark River extends further down and out of the frame to another dark nebula known as the “Pipe Nebula”.

I think you can now begin to appreciate just why it is that the Rho Ophiuchi Cloud Complex is so often imaged by astrophotographers. It’s colorful, it looks mysterious, and it has so much cool stuff going on within and around it. Hopefully, the next time you look upon images such as this, you will have a bit more useful knowledge to help interpret them and to enjoy both their awe and wonder.

If you would like to see more of Danny’s work, just go here: https://www.astrobin.com/users/dflipp/