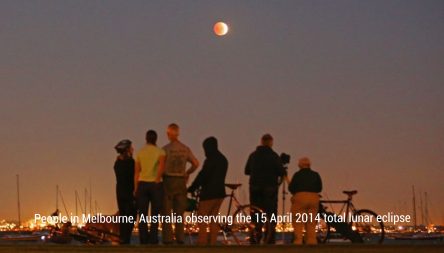 The people of ancient times viewed the night sky with a mixture of awe, wonderment, reverence, and, on occasion, with a certain amount of fear.  The latter emotion often arose whenever something unpredictable or out of the ordinary appeared in the sky.  The sudden appearance of a bright comet, the Sun slowly disappearing as if a giant, invisible snake was swallowing it, or the moon becoming a blood red color were all regarded as bad omens.  And who could blame them for looking up in fear?  Without knowing why these things were happening, any one of us would surely feel a sense of dread or terror upon witnessing such an event.  We’ve learned a lot over the intervening centuries about these kinds of phenomena and, for most of us, fear is no longer a part of the equation anymore.  Nevertheless, at the mention of the word “eclipse”, be it a solar or lunar eclipse, people tend to get excited about the prospect of seeing one firsthand.  Thanks to the celestial mechanics of our solar system, on Friday, November 19, 2021, we will be treated to the magic of a partial lunar eclipse. 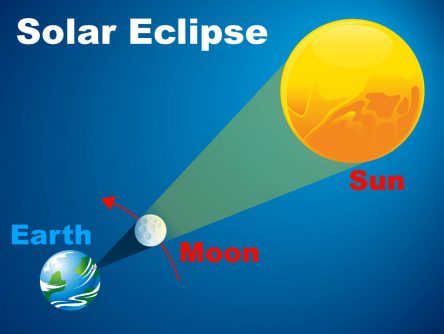 But let’s put aside solar eclipses and focus on the lunar variety. Remember, a lunar eclipse is what happens whenever the Earth is throwing shade onto the moon.  In order for that to happen, we must have an alignment like this: moon->Earth->Sun.  The only time we have an alignment like this is at full moon and that’s why lunar eclipses can only be seen during this phase (likewise, a solar eclipse can only occur when the moon is in between the Earth and the Sun, and that only happens during new moon). 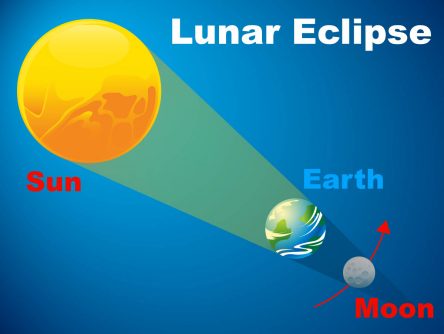 If you are paying attention, you might be wondering why, if we have a full (and new) moon each month, do we not see eclipses all the time.  The answer is that the alignments between the moon, Earth, and the Sun has to be, as Goldilocks so succinctly put it, juuuuust right.  There are two things that prevent these just right alignments from happening more often.  First off, the moon’s orbit around the Earth does not align with the Earth’s orbital plane around the Sun; the moon’s orbital plane, relative to our own, is inclined by about 5 degrees. The only way we can see an eclipse is when the moon happens to be crossing through our orbital plane during the time of a full or new moon.   The second complication is that the moon does not orbit theEarth in a perfect circle, it does so in a kind of egg-shaped pattern called an “ellipse”.   If it orbited in a perfect circle, with Earth in the exact center, it would always be the same distance away from us but, with an ellipse, its distance is constantly varying.  Sometimes the moon is as close as 221,500 miles or it can be as far away as 252,700 miles.  It all depends on where it is in its orbit but it is, on average, about 239,000 miles away.  So, you see why these “just right alignments” are not an every-month occurrence.

Okay, since shadows are such an important part of a lunar eclipse, let’s talk briefly about them.  Let’s say that it’s a full moon and you are standing in your front yard looking at it.  Where is the Sun in relation to you?  Why, it’s directly behind you but below the horizon.  Yes, just because you are standing there in the dark does not mean that the Sun has turned in for the night.  It’s still out there in space, blazing away.  In fact, it’s the Sun’s light that is shining onto the lunar surface, making it bright (the moon does not generate any visible light of its own).  You just happen to be standing on the night side of the Earth and behind you is a ginormous lamp, shining out in all directions in space.  When the light strikes the Earth, our planet is going to be casting a very long shadow out into space in the opposite direction from the Sun, just like you would cast a shadow when standing in front of a bright light source.  But the Earth is round, and the shadow it casts is going to be in the shape of a large cone.  This cone-shaped shadow has two parts.  The first is a dark central shadow that also forms a cone and is called the “umbra”.  The umbra is broadest near the Earth but tapers and gets smaller the further away from Earth it gets.  The second shadow is called the “penumbra”.  The penumbra is fainter and it becomes broader the further away it gets from the Earth.  Check out the accompanying diagram to get an idea of what I’m talking about.

Lunar eclipses come in three different flavors, all depending on what kind of alignment celestial mechanics has given us for the night in question.  The kind of alignment we have also determines which part of the Earth’s shadow the moon will be moving through.  In a penumbral lunar eclipse, the moon passes through the outer of Earth’s two shadows.  These are not very interesting to observe, in fact, it can be very hard to tell that anything out of the ordinary is happening at all.  With a partial lunar eclipse, the kind that we will see on November 19th, part of the moon passes through the Earth’s umbra, the darkest shadow, and that can lead to some very obvious changes in the moon’s appearance.  Finally, a total lunar eclipse results when the moon is lined up just right, and close enough, the be completely inside the Earth’s umbra.  Due to the effects of sunlight filtering through the Earth’s atmosphere, we often see the moon turn a deep red color.  Total lunar eclipses are, without doubt, the tastiest of the three flavors.  But, as we shall see, partial lunar eclipses can be quite nice too.

WHAT YOU ARE SEEING AND WHEN TO SEE IT 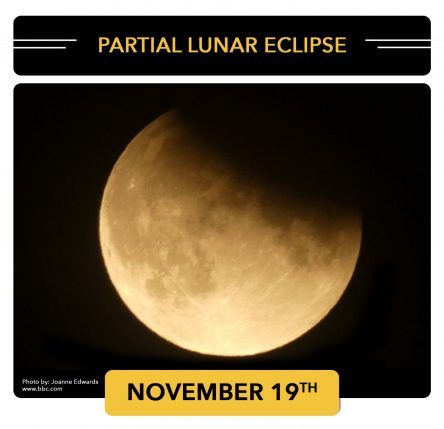 In order to see this spectacle, you will either need to stay up into the wee predawn hours of November 19th or, go to bed early on the 18th and set your alarm.  Here’s are breakdown of the timing (CST):

• 12:02 AM: The moon enters the Earth’s penumbra.  Stay in bed, this part is not only not interesting, it’s invisible to boot.

• 1:18 AM:  Okay, things are now just beginning to get interesting as the moon begins to enter into the umbra, the darkest part of the Earth’s shadow.

• 3:02 AM: Get your camera ready, the moon is now as deep into the umbra as it will get, with only 2.6 % of the moon’s visible diameter left illuminated.

• 6:03 AM:  I hope you are getting some sleep because the moon is now leaving the penumbra and there is nothing to see here. 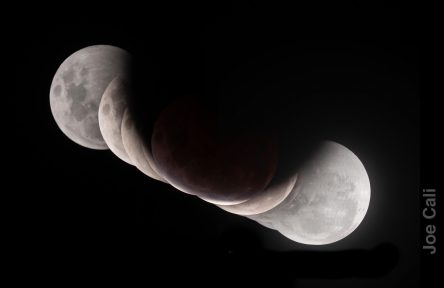 This eclipse, all told, is a rather lengthy event (normally it would only take about an hour for the moon to drift completely into the Earth’s shadow).  Why is this one so long?  It’s because on this night, the moon is around 252,600 miles away and that means that it is moving more slowly in its orbit compared to when it’s closer to Earth.  Will the moon turn red?  No.  That happens when the moon is completely within Earth’s shadow and the light from the Sun that is being bent through our atmosphere has most of the bluer components scattered out of it, only allowing the redder portions to reach the lunar surface,  making it look red.  But take heart, the moon’s color will definitely change because it is deep enough into the umbra to see some of the filtering effects from our atmosphere.   This time, rather than a deep red, you will likely see the moon become a coppery color.  This will be a great photo opportunity so get your camera ready beforehand.

Let’s hope that we have clear skies during this time so that we can all get outside and look up together in both awe and wonder!