May 2022 Feature – A TOTAL LUNAR ECLIPSE 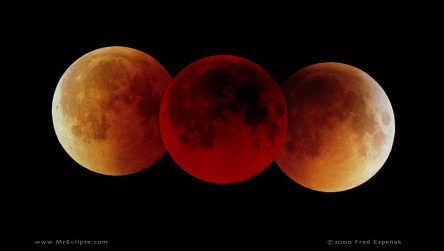 “Familiarity breeds contempt” is an age-old proverb and one that is, all too sadly, true.   “Contempt” may perhaps be too strong of a word in all cases, but familiarity most certainly can, in the words of astronomer Fred Schaaf, “dull the eye of wonder”.    The Sun and moon are both spectacular celestial objects that are practically on our front doorstep.  Yet, through everyday familiarity, we have come to take their wondrous presence for granted.   But that can change whenever we witness an eclipse, and the Sun and moon are seen in an all-new guise.  On the night of May 15th, the universe obliges by offering us a spectacular total lunar eclipse and our moon can be seen with a very dramatic visage indeed.

WHAT IS A LUNAR ECLIPSE 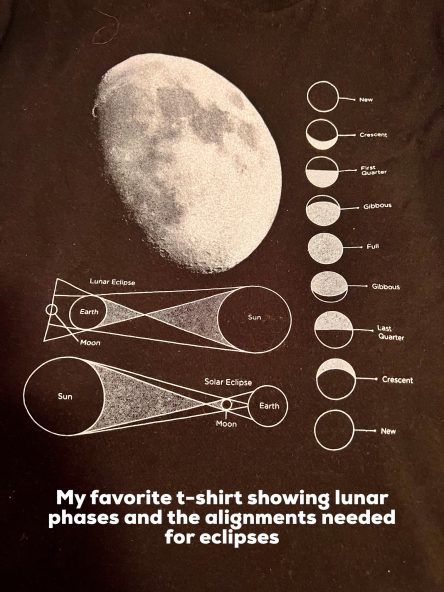 A lunar eclipse is what happens when the Earth can cast its shadow onto the moon’s surface.  For the Earth to do this it must be in between the moon and the Sun and the only time this kind of alignment can occur is during a full moon.  Likewise, the only time we can see a total solar eclipse is when the moon is in between the Earth and the Sun, and this kind of alignment can only occur during a new moon phase.  Okay, you might be asking: if we have both a new and full moon roughly once a month, why do we not see an eclipse of some sort every month?  The answer is the alignment between all three objects must be very precise and that level of precision obviously does not happen every month.  Why pray tell is that?  Well, it’s all because the moon’s orbit around the Earth is set on an incline of about 5 degrees with respect to our planet’s orbital plane around the Sun.  The upshot of all of that is that, during a new moon, the moon is either below or above our line of sight to the Sun and, so it does not block our view to create a total solar eclipse.   During a full moon, the moon is usually positioned somewhere outside of the Earth’s shadow and, so, we do not see a total lunar eclipse every full moon.  An orbital incline of 5 degrees might not sound like a lot but it is just enough to keep all three of the major celestial players in these eclipse games from being in perfect alignment to create an eclipse on any regular basis.  And that might not be such a bad thing because if it were, I’m sure we humans would soon become blasé about monthly eclipses as well. 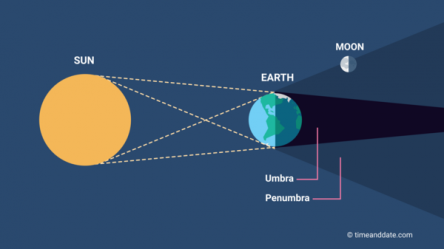 Before we go into the details for the timing of this month’s eclipse, it would be best if we understood a bit about the Earth’s shadow and just how the spectacular effects of a lunar eclipse are created.

Lunar eclipses occur whenever the moon passes through the Earth’s shadow and, just like your own shadow, the Earth’s has two parts: the “penumbra” and the “umbra”.   The darkest part of any shadow is the umbra (think, “umbrella”) while the outer, dimmer region of a shadow, is called the penumbra (think, “almost but not quite full shade”).   Because the Earth is a sphere and because the light source, the Sun, is in the apparent form of a large, bright disc in the sky, the shape of Earth’s shadow is a cone.   The long, tapering cone-shaped umbra of Earth’s shadow extends for about a million miles out into space.  The moon is, on average, about 239,000 miles away, so we have a lot of shade to potentially cast onto the moon provided that alignment conditions are just right.   Depending on just how far the moon penetrates into the Earth’s shadow, you can end up with three different kinds of lunar eclipse.  If the moon just skirts the outer, dimmer shadow, you get a “penumbral eclipse”.  Not much happens in a penumbral eclipse and, to be honest, you can’t really tell that anything of significance is occurring.  But once the moon slides into the umbra, things become much more noticeable.   Once inside the umbra, it looks as though a dark stain is slowly creeping across the lunar surface.   If the dark stain created by the umbra encompasses the entire illuminated side of the moon facing the Earth, you then have a total lunar eclipse. 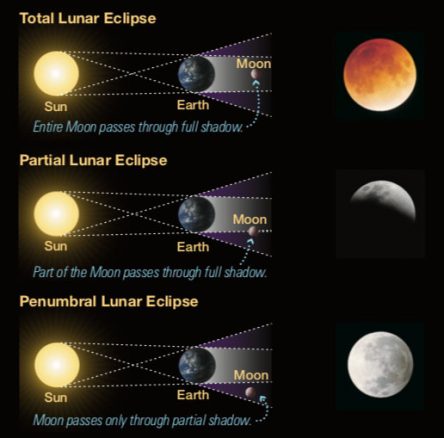 Perhaps you have either seen or heard about “blood moons”, where the lunar surface becomes either a copper or deep red color.  What’s up with that?   Well to answer that, let’s say that you were on the moon, looking towards the Earth, during a total lunar eclipse.    Consider this, as you stand upon the lunar surface you would see the Earth go through a series of phases over time, just like we see the moon go through phases from our vantage point back here at home.  Except, you would see the exact opposite Earth phase from the moon phase that we are seeing here on our home world.  For example, during a total lunar eclipse, here on Earth, we see the moon at full phase because the alignment in the sky is like this: moon->Earth->Sun.   But from your POV on the moon, you would see Earth along your line of sight to the Sun and, to you, the Earth would be at new phase.  As the bulk of the Earth covers up the Sun, you would then see a bright red-orange ring of light encircling the Earth.   This is all the sunrises and sunsets that are happening on Earth at this moment in time.  It is the Sun’s light passing through and then becoming refracted as it passes through the Earth’s atmosphere.   This refracting and filtering of sunlight through the Earth’s atmosphere scatters out the short wavelength blue portions of the light, allowing the longer wavelength redder portions to pass on through, creating the reddish tinged light that is now illuminating the lunar surface.  It’s the same process that creates the red sunrises and sunsets here on Earth and because the Earth’s atmosphere is a very fluid and dynamic medium, the exact tint of red can vary greatly from one lunar eclipse to another.   On very rare occasions, if there are a lot of volcanic particulates in the upper layers of the Earth’s atmosphere, the moon may turn black in color, or disappear altogether. 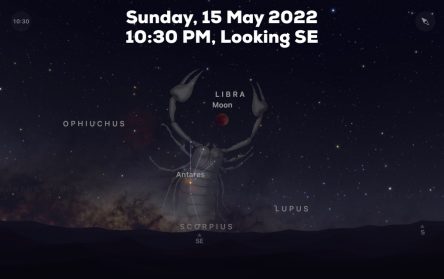 On the evening of Sunday, May 15th, the full moon will rise in the SE.  Here is a breakdown on the timing of events that I’ve lifted from the Time and Date website, a great resource for the timing of celestial events such as eclipses and meteor showers.

Each month’s full moon has a name associated with it, often derived from Native American culture.  The names are intended to reflect some aspect of nature that is taking place within each month.  For the month of May, the full moon’s name is “the full flower moon” because it is the time of year when many plants are opening their blossoms.

Earlier, I mentioned that the moon is, on average, about 239,000 miles away from the Earth.  The reason that there is an average is that the shape of the moon’s orbit around the Earth is not a perfect circle with the Earth in the exact center.  Instead, it’s orbit is in the shape of a somewhat squashed circle, an ellipse.  As a consequence, the moon’s distance from the Earth always varies.  When it the moon is at its most distant point in its orbit, we say that it has reached “apogee” and when it is closest to us (and thus appears a bit bigger) it is at “perigee”.  This full moon will occur right around perigee, so the moon will be about as large as it ever gets.

The moon will be at its darkest, and most red, during totality. 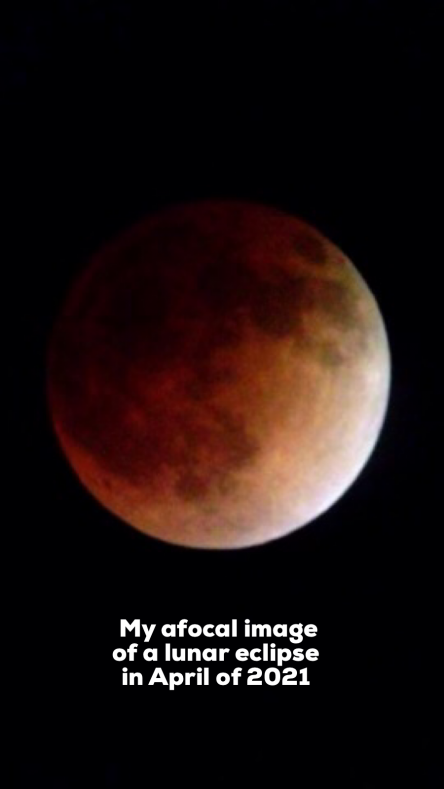 You do not need any special equipment to view the eclipse, but you will find that binoculars or a small telescope (which you can obtain from many local public libraries in the central and NW AR areas thanks to funding from the Arkansas Space Grant Consortium) will enhance the view.  I am not a skilled photographer and imaging the moon can always be a tricky proposition, even for the skilled photographer.  The easiest way that I have found to image a lunar eclipse is by using the method of afocal photography.  This simply involves holding the eyepiece of my cell phone camera up to that of a telescope aimed at the moon.  Try it if you have access to a scope.

While the eclipse can be viewed under just about any level of local light pollution, be aware that the Central Arkansas Astronomical Society will be offering a viewing party from their River Ridge Observatory near Wye Mountain.  For details, visit their website at www.caasastro.org.   Also, should the event be clouded out locally, be aware that websites such as NASA and Time and Date will provide livestreaming of the eclipse as well.  The main thing I want to get across is that you just get outside, have fun, and to look up in both awe and wonder.