July 2022 – Dodge the Sting and Enjoy Some Summer Bling 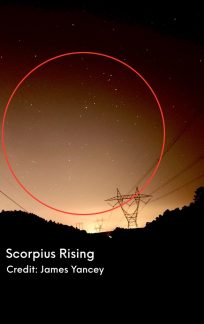 Within an hour of the Sun having ushered to a close yet another scorching summer’s day, even the least imaginative among us can easily discern the outlines of a giant scorpion crawling up the sky above the southern horizon. Scorpius, the eighth and most southerly constellation of the zodiac, guards two deep sky gems near its deadly stinger. Bright enough to be seen with the unaided eye under a good, rural dark sky, these two celestial beauties are best admired with a simple pair of binoculars that you may already have lying around the house.

SCORPIUS AND ITS MYTHOLOGY

Orion, whose magnificent constellation graces our winter sky, was a mighty hunter according to Greek mythology. He was also said to be a hot hunk of manliness. Well, he said so anyways. 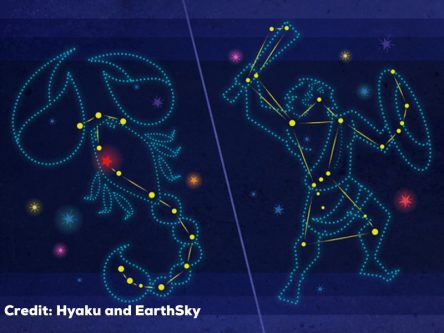 So taken with himself, he once boasted that he could kill any living creature upon the Earth. This greatly offended the sensibilities of the Earth Mother goddess, Gaia and, in a classic “hold my beer” moment, she causes a giant scorpion to rise from out of the Earth, to attack Orion. The mighty hunter and the fearsome arachnid engage in a death duel and each opponent succeeds in killing the other. The gods were so impressed with the fight that they decided to honor the combatants by placing them both in the sky. However, so as not to disrupt the celestial harmony, one was placed in the winter sky while the other could only appear in the summer sky. By placing them in the sky at different seasons, the two were less likely to start an unseemly brawl in the heavens. 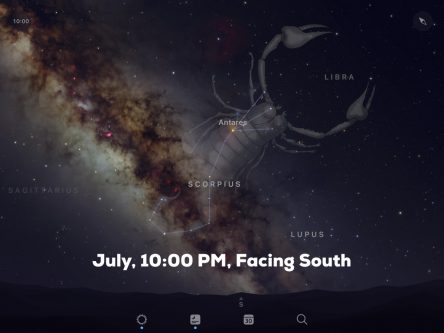 To find Scorpius, just step outside this month about an hour after sunset and face south. Look for a bright, reddish-orange star, it’s the brightest star in this part of the sky right now and you may even see it within the half hour before the Sun has even set. This star is called Antares and it represents the heart of the Scorpion. The name means “rival of Mars” because its red color sometimes makes people think that they are viewing the Red Planet. Antares is red because it is a Red Supergiant. Red Supergiants are humongous stars (in this case, some 700 times the diameter of the Sun) that have run out of hydrogen, their primary fuel source in their cores, and are currently burning and fusing progressively heavier elements before they meet their ultimate demise in a supernova explosion. As they go through their final stages, their outer layers bloat outwards and turn the star to a red-orange color.

Antares is at the center of a fishhook-shaped pattern of stars. The fishhook pattern of stars is the body of the Scorpion. To find this month’s featured objects, trace out the outline of the Scorpion’s body until you come to the tail. Use the accompanying graphic to locate the two stars that denote the tail tip and stinger of Scorpius: Shaula (pronounced “SHOWL-a”) and Lesath (pronounced “LAY-soth”). The objects we are looking for are both “open star clusters” located near Shaula and Lesath: Messier 7 (also known as Ptolemy’s Cluster) and Messier 6 (also known as the Butterfly Cluster). 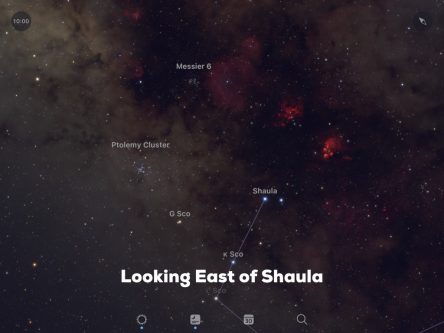 To find these two star clusters, grab a pair of binoculars (any pair will do but I prefer a pair of 7×50 or 10x50s, preferably the latter type, which will make the members of these star clusters really pop out) and head outside about an hour after sunset. Locate Scorpius with your unaided eye and then locate Shaula and Lesath. Use the accompanying graphic. Locate Shaula and Lesath with your binoculars and then start to scan the region to the left (east) of Shaula. It is here that you will likely find Messier 7 (M7) first, as it is the biggest and brightest of the two star clusters. Once you have M7, look towards the upper part of your FOV and you will likely find M6 in the same view. NOTE: I suggest observing from the darkest, rural sky you can find. I have found both clusters with binoculars under urban light polluted skies, but the best views will be obtained with reduced light pollution. Visit the Arkansas Natural Sky website to find a list of dark sky observing spots around the state: https://darkskyarkansas.org

Why binoculars and not a telescope? Binoculars offer a more generous FOV which brings out the grandeur of open star clusters than does the generally narrower FOV offered by most telescopes. Under a good dark sky (and with good eyesight), these clusters can both be picked out with just the unaided eye.

As I’ve said, any pair of binoculars will do but my personal preference is going to be 10×50’s or larger. I suggest purchasing an L-bracket that will allow you to mount the binoculars onto a tripod. Alternatively, you can use a reclining lawn chair and brace the binoculars on your knees. 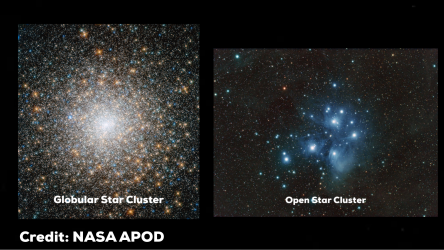 Star clusters are groups of stars that share a common origin, having formed from out of the collapse of gigantic clouds of cold, molecular hydrogen gas and dust. They are also all, to some extent, mutually bound together by gravity for some period of time. Because they all share a common origin, star clusters are particularly useful to astronomers who wish to study and model the evolution and aging process of stars over time.

The other type of star cluster, and the type to which M7 and M6 belong, is what is known as an open star cluster. The members of open star clusters all share the same common origin, are all pretty much recently formed (cosmically speaking), but usually number in the dozens or a few hundred individual stars. They are much more loosely bound together than are the stars in globular clusters and will, over time, disperse themselves throughout the galaxy. 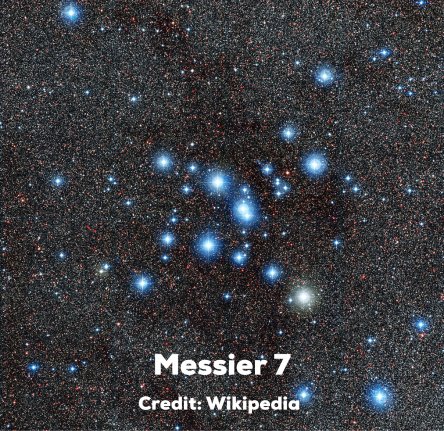 M7 has been known since ancient times. The famous Greco-Egyptian mathematician and astronomer Claudius Ptolemy lists it in his masterwork of astronomy, “The Almagest” as far back as 130 AD. He describes it as “a nebula following the sting of Scorpius”. To this day, it is also known among both professional and amateur astronomers as “Ptolemy’s Cluster”. During the 1700’s, French comet hunter Charles Messier cataloged it along with 110 other “comet impostors”, little did he know that he was compiling a catalog of the deep sky’s top choice objects to see in modern day binoculars or a small telescope. To him, they were just objects that he and his comet hunting buddies might mistake for dirty snowballs within our own solar system.

M7 contains about 80 stars that range in magnitude between 6 and 10. Astronomers use a numerical brightness, or magnitude, scale for stars and other celestial objects where the brightest objects are assigned lower numbers and dimmer objects with higher numbers. The theoretical cutoff point for naked eye visibility is around magnitude 6.

On the sky, M7 spans some 80 arc seconds, that’s 3X that of a full moon, which is why you need binoculars or a wide field telescope to appreciate its beauty. It is located nearly a thousand light years away and is estimated to be some 200 million years old. At the time these stars were being born, some of the earliest dinosaurs were evolving and beginning their ascendancy of the Earth. 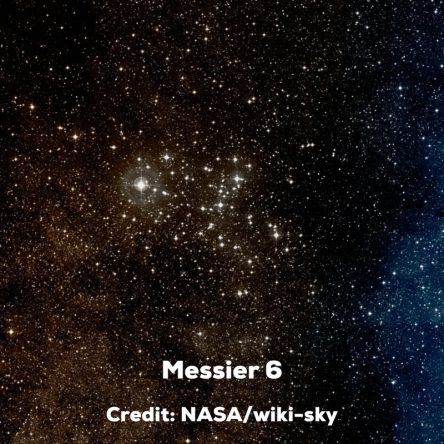 M6, discovered in 1654 by Italian astronomer Giovanni Hodierna (although it was likely known long before that) is also made up of around 80 stars and spans some 20 light years across. It is located a bit further out than M7 at an estimated 2,000 light years and is also considerably younger at around 50 to 100 million years of age. Being so young it is more compact than M7 and when you look at it through a pair of 10×50 binoculars or a small telescope (say, around 4” of aperture) you can see that the stars are arranged in an X-pattern, lending some people to think that it resembles a butterfly with its wings outspread. Many of the stars comprising M6 are very large, very hot spectral type O and A stars. These massive kinds of stars live fast and die young and a few of the cluster’s largest stars have already begun to show signs of aging by having evolved into yellow, orange, and red giants.

Since you have your binoculars and are already outside looking about, take some time to use the binoculars to scan the length of the summer Milky Way, which sweeps through the tail of the Scorpion and then arches high overhead, through Cygnus the Swan and on to the NE. Even if you cannot readily see the Milky Way with your unaided eye, you will still be rewarded with much starry splendor as you peer inwards to our Galaxy with this edge-on view. It’s a stunning sight and it’s bound to fill you with much awe and wonder.