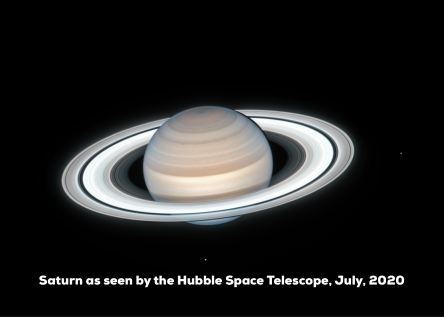 I can sit here and extol with endless verbiage the beauty and wonder of Saturn’s rings but it’s really something that you must experience for yourself.  This month, Saturn is placed for prime time viewing in our evening skies and I’m here to help make sure that you get an opportunity see Saturn in a telescope, which is the best way to really appreciate it. 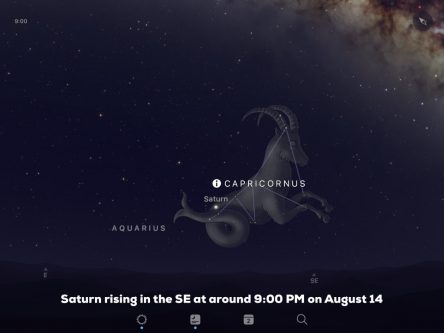 For several months now, Saturn has been a morning object but this month it has transitioned to our evening sky, rising by around 9:00 PM.  It will remain in our evening sky for the rest of the year, but you will want to try and observe it telescopically this month.  Why?  On August 14th, the Earth glides in between the Sun and Saturn. This alignment places Saturn on the opposite side of the Sun in our sky and it is called, appropriately enough, “opposition”.  Whenever an outer planet is at opposition it will rise right at sunset, stay up all night and is well placed for observing.  The other advantage to this kind of alignment is that Saturn is on the same side of the Sun as the Earth is, placing Saturn closest to Earth in its orbit for the year.  On average, Saturn is some 1,329,454,066 kilometers from Earth.  That’s kind of a bulky number, so let’s put it in terms of light minutes.  Light travels at the incredible speed of 300,000 km/sec.  The average travel time for light to reach Earth from Saturn is 1 hour and 14 minutes.  Around opposition, the travel time for light between Saturn and Earth is about 73 minutes. 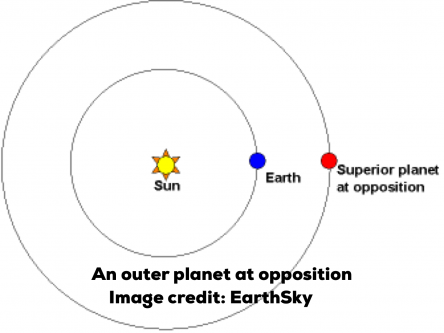 As the weeks progress, Saturn gets further and further away so you will want to catch it while it’s still close at hand.   To find Saturn, just step outside after sunset any night this month and face SE, it’s the brightest thing in this part of the sky right now (apart from the moon which sits close to Saturn upon the sky on the night of the 11th and Jupiter which rises an hour or so after Saturn in the east and which comes into opposition late in September this year).   Since ancient times, people have often seen Saturn as a golden colored “star” in our night sky.  It wasn’t until the 17th century that astronomers discovered that it had rings.

You cannot see the rings with binoculars, the planet will only appear as a golden disc that bulges oddly around its equator.  However, any size telescope will reveal the rings in all their splendor.  Just keep in mind that the more aperture your scope has, the more splendor (and more details) you will perceive. 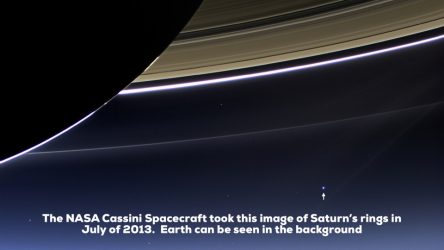 Saturn is of course a gas giant planet, made primarily of hydrogen and helium with some amount of methane and ammonia in its upper, visible atmosphere.  It is the sixth world from the Sun and it spins upon its axis at a rather speedy 10.5 hours.  However, being so far away from the Sun, it takes Saturn 29.5 Earth years to complete one lap around our star.  It’s also big.  Not quite as big as Jupiter but at some 75,000 miles in diameter, it would take you awhile to get from one side to the other using even the fastest means of Earthly transport available.  Yet, despite its size, it’s not very dense.  In fact, it’s less dense than water.  And you’ve probably already heard that if you could find a big enough bathtub, it would float.   Annnnd, yes, it would leave a ring.  Thank you, I will show myself out. 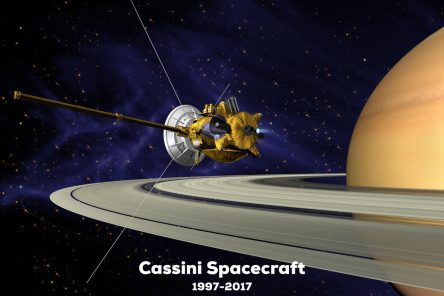 Data from NASA’s dearly departed Cassini spacecraft (after a 13-yearlong mission, the spacecraft was decommissioned and deliberately steered into the planet’s atmosphere where it burned up in Saturn’s skies and became a part of the world it collected data on for so long) suggests Saturn’s rings are a rather youthful 100 million years of age.   We don’t know exactly how the rings formed but our best model indicates that either a couple of ice moons collided and broke into many pieces or an ice moon or two strayed too far into Saturn’s gravity well and got shredded into tiny bits by the giant planet.   Either way, Cassini data and advanced computer modeling tells us that for the rings to look so bright and pristine, they must be fairly young and our most conservative age estimates place it at around 100 million years. 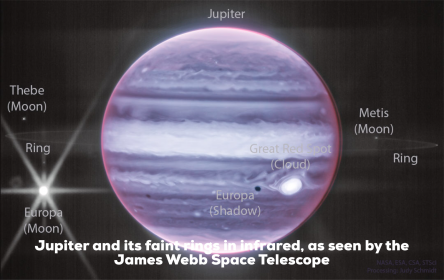 You may be surprised to learn that Saturn is not the only object in the solar system that has rings.  During the late 1970’s and early 1980’s, we learned from the Voyager missions that Jupiter, Uranus, and Neptune also sport rings, but they are too faint to see with any backyard telescope.  Over the years, we’ve even learned that some of the minor planets (aka “asteroids”) have rings as well.   So, it’s fair to ask: why do we not see spectacular ring systems around the other giant planets?  Jupiter for example would be a great candidate for some ring eye candy.  Well, on July 21st, researchers at University of California, Riverside, have released a preprint paper to arXiv, claiming that they have an answer to Jupiter’s lack of a gorgeous ring system.  According to the research team, Jupiter’s four large Galilean moons are to blame.  According to Stephen Kane, who led the team:

“We found that the Galilean moons of Jupiter, one of which is the largest moon in our solar system, would very quickly destroy any large rings that might form. Massive planets form massive moons, which prevents them from having substantial rings.” -(From the EarthSky article, “Why Aren’t Jupiter’s Rings Glorious, Like Saturn’s?”, 26 July 2022)

Kane says it’s possible that Jupiter may have had a more substantial ring system in its past, but if it did, it didn’t last long.   All of which brings up an important point: ring systems do not last forever, and we are lucky to be living at a point in the solar system’s history where Saturn still flashes such amazing space bling.  Not only is Saturn’s ring system transitory, its orientation towards Earth changes with time, making them showy for certain periods of time and then practically invisible at others. 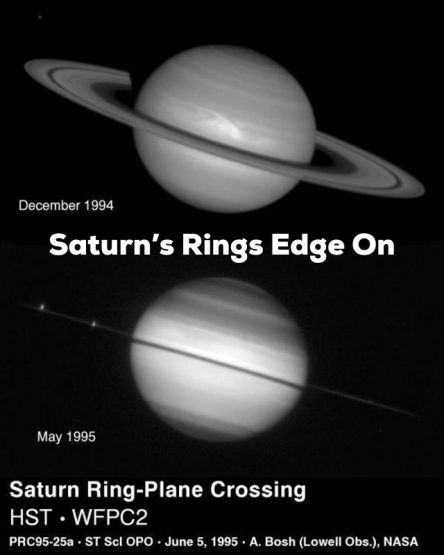 Earth is tilted upon its axis by 23.5 degrees with respect to our orbital plane around the Sun.  As a consequence of this, each hemisphere of the globe gets different amounts of direct sunlight throughout the year, it’s what brings about the seasons.  Saturn to has an axial tilt, one that is about 26.73 degrees with respect to its orbital plane around the Sun.  Given the planet’s much slower trip around the Sun, its year is about 29 Earth years long and each season is about 7 Earth years long.  The upshot of all of this is that those rings appear to tilt with respect to our view from Earth with each passing season on Saturn.   At opposition this year, the rings are 14 degrees open, it will be another 5 years before they are this open again.  Next year, they will only be 9 degrees open, and you will have a hard time making out much detail in them.  When the rings appear edge on to our line of sight, as they will in 2025, they are practically invisible (btw, those majestic rings are only meters thick.  You heard me, METERS thick!).

HOW I CAN SEE THESE THINGS FOR MYSELF? 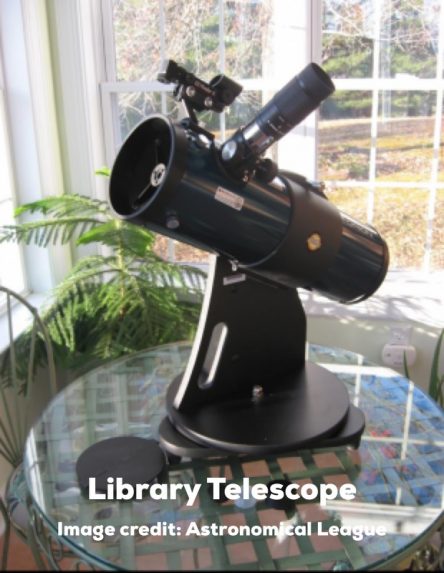 If you do not own a telescope, don’t worry, the NASA Arkansas Space Grant (here at UA Little Rock), in conjunction with the Central Arkansas Library System and the Central Arkansas Astronomical Society, has funded the acquisition of library loaner telescopes.  These small, portable, robust, and easy to use scopes can be found in every branch of the CALS system.  If you have a library card with them, then you can check out a scope just like you can a book for two weeks.   Here is a link to the CALS website:  https://cals.org/telescope-lending

Check out a telescope and begin checking out the universe from your own backyard, it’s that easy!

Not comfortable operating a telescope?  Let me do it for you.  I am scheduled to be at the Fletcher Library Branch on 15 August at around 8:00 PM to set up a telescope or two in order to view Saturn when its rising at around 9:00 PM.  I will have an indoor program at around 8:00 PM and then we will head outside to see what we can see (skies permitting).  If that doesn’t work out, I will invariably be doing other outreach events throughout the year and you can email me about other opportunities at drheath@ualr.edu   Alternatively, you can check with the Central Arkansas Astronomical Society’s calendar of events to see what’s going on in the way of public events at www.caasastro.org   Each monthly club meeting is free and open to the public and, is skies permit, there is telescope observing after each meeting’s indoor programs.   You are always welcome to come up to the River Ridge Observatory and hang out with us.

If you do not get a feeling of awe and wonder at seeing Saturn in a telescope then check your pulse.   It’s amazing to think that this glorious and complex system of ice particles, ranging in size from dust to mountains, and only meters thick is so ephemeral and yet we are alive right now to bear witness to all of its grandeur.