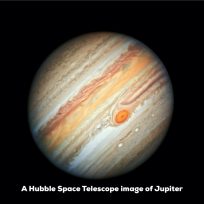 ur solar system consists of the Sun and the planets, dwarf planets, moons, asteroids, and comets that orbit around it.  The eight classical planets occupy two distinct regions of the solar system.  The inner solar system is comprised of the 4 rocky (or terrestrial) worlds: Mercury, Venus, Earth, and Mars; while the outer solar system is made up of two gas giant planets: Jupiter and Saturn and two ice giants: Uranus and Neptune.  Last month, Saturn came into prime viewing and this month Jupiter joins the evening planet show. 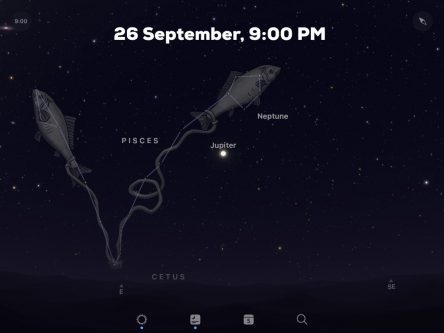 Jupiter has been part of our evening sky for the past month or so, rising about an hour after sunset, but on September 26th it reaches “opposition” and will rise in the east right at sunset and stay up all night.  Opposition simply means that from our point of view, Jupiter is on the opposite side of the sky from the Sun, with Earth in the middle.  Right around the time of opposition, an outer planet is at its closest point in its orbit to Earth and it is also around this time that it will reach maximum brightness.

All throughout the month, you can catch Jupiter in the eastern sky within an hour after sunset.  It is the brightest thing in our summer night sky right now outside of the moon.  On the night of the 26th, it will rise right at sunset and reach its highest point in the sky at around midnight, a great time to observe it with a telescope.  The planet can be found in the constellation of Pisces.  As a bonus, the planet Neptune can be viewed in a telescope just off to the west of Jupiter. 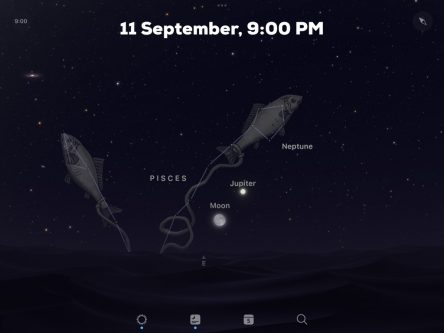 Around midnight on 11 September, you can easily see Jupiter to the left of the waning gibbous moon.  This will make for a fine photo opportunity that you can easily capture on most modern cell phone cameras and then share to social media.   Depending on your cell phone camera, you may or may not capture any surface details on the moon (if you know what you are doing, you will have better results with a Samsung Galaxy smartphone).

OBSERVING JUPITER AND WHAT YOU ARE SEEING 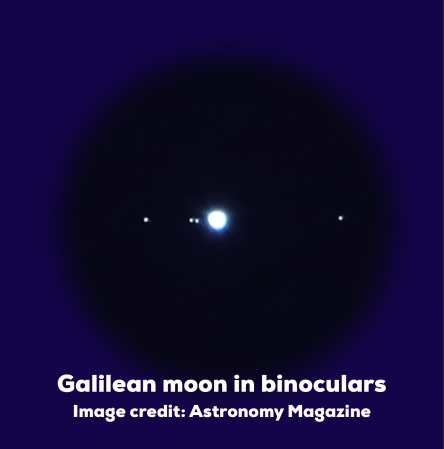 Jupiter is some 484 million miles from the Sun, but it is also about 87,000 miles in diameter (it’s so big that you can easily fit 1,325 Earths inside it).  Being a gas giant, its upper cloud layers are very good at reflecting sunlight, making it appear very bright to us here on Earth.  The upshot of all this is that even with a small telescope, you are going to see surface details more easily with Jupiter than with any other planet in the solar system.  But you don’t even need a telescope to see cool things with Jupiter.  A basic pair of binoculars you have laying around the house won’t show you surface details, but they will show you Jupiter’s four largest moons orbiting around it: Io, Europa, Ganymede, and Callisto.  These moons are also known as the “Galilean Moons”, so called because around late 1609 or early 1610, Italian scientist Galileo Galilei first observed them in his modest DIY telescope.   Galileo soon recognized them as satellites of the planet Jupiter.  Things in the heavens orbiting other things that were not Earth centered?  Heresy!  Galileo’s observations were the final nail in the coffin of 1,500 years of an Earth centered dogma regarding our place in the cosmos.  Just think, with a pair of binoculars, you too can duplicate Galileo’s revolutionary observations.   But which moons are you seeing?  Some astronomy apps will tell you which moons are visible (remember, some might be out of sight behind the planet when you are observing) at any given time.  Others won’t.  My suggestion is to get a Jupiter dedicated observing app such as Sky & Telescope’s Jupiter’s Moon’s.  Keep watching the moons off and on over the course of a few hours or on multiple nights and you will be able to see that they are always changing their relative positions.

Through a telescope, Jupiter really begins to impress.  Remember, even a small scope can show you lots of details.  If you do not own a telescope, you can check one out from the Central Arkansas Library System for two weeks.  I will be conducting a Moon/Saturn/Jupiter observing session at the Fletcher Branch Library in Little Rock’s Hillcrest area on Friday, 9 September, at 8:00 PM (with the 10th as a rain date).  Also, check with the Central Arkansas Astronomical Society’s website for star party dates and monthly club meetings (both of which are always open to the public for free!): www.caasastro.org 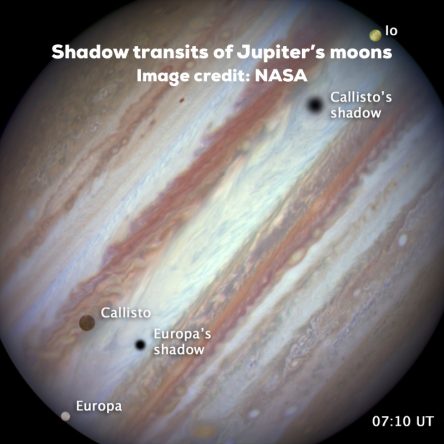 With a telescope, there is more to see with the Galilean moons.  These four moons orbit around the equatorial belt of the planet and, from our perspective here on Earth, we get to see them move in front of (“transit”) the face of the planet.  At such times we can see the very distinct shadow that each moon casts onto Jupiter’s upper cloud layers.  It’s an incredible sight and one I never tire of observing.  Once again, apps such as Jupiter’s Moons or Sky Safari will help you know when these events are happening.  Also check with web sites such as EarthSky or Sky & Telescope’s Jupiter’s Moons website: https://skyandtelescope.org/wp-content/plugins/observing-tools/jupiter_moons/jupiter.html

Seen in toto, Jupiter appears placid and serene but that belies the planets true nature.  Jupiter is a planet of extremes.  Lightning is constantly crackling across the sky and is thousands of times more powerful than any lightning bolt on Earth, cloud layers are some 30 miles thick, wind speeds range from 300 to 900 mph, and there are storm systems that have been raging in the atmosphere for as long as we’ve been observing the planet that are capable of swallowing the Earth twice over. 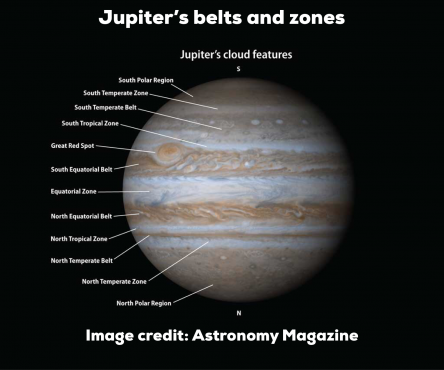 Jupiter’s 10-hour rotation period is what creates those light colored, pastel bands in the atmosphere.  Small telescopes will show two dark brown belts running parallel with the equator and mid-sized scope will reveal light colored stripes known as “zones”.  The zones are cold, high altitude ammonia ice clouds whereas the belts are warm, low level clouds containing sulfur and phosphorus containing gases.  But I suspect what you would really like to see is the Great Red Spot, a giant hurricane that can contain two Earths inside it and that has probably been churning in the Jovian atmosphere since 1665, maybe even longer.

On Earth, our weather is driven by heat from the Sun, but Jupiter is too far away for the Sun to wield much influence there.  Instead of the energy from sunlight, it is heat welling up from the planet’s interior that feeds Jupiter’s storms. 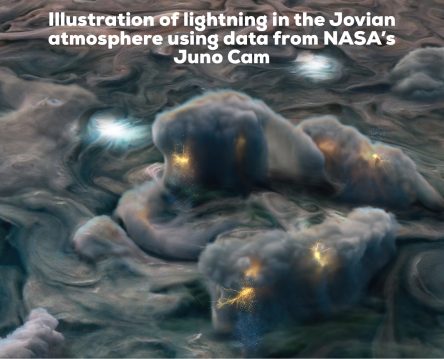 At some 15,000 miles long and 7,400 miles wide, this Godzilla of storms would register as a Category 20 hurricane back here on Earth.  There are plenty of mysteries still surrounding this much observed storm.  For example, over the past 100 years we have seen the storm shrinking in size and changing color over time.  On occasion, it has disappeared altogether, only to reappear later.  We don’t know why.  To observe the Great Red Spot, you will likely need a telescope of at least 6” to 8”.  In my 8’ scope, it only every appears as pinkish speck.  Experiment with colored filters to help add contrast and make the GRS pop out even more.  In order to know when the GRS is going to transit, visit Sky & Telescope’s transit times web page: https://skyandtelescope.org/observing/interactive-sky-watching-tools/transit-times-of-jupiters-great-red-spot/ 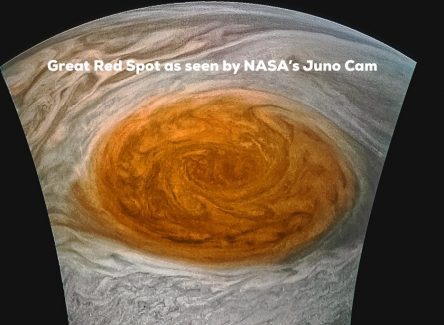 Jupiter is likely the first planet to have formed in our solar system.  We believe this to be true because it is made up of the same stuff as the Sun is, hydrogen and helium.  And lots of it.  Not long after a star is born, it generates a fierce wind, blowing away much of these lighter gases.  So, for Jupiter to have acquired these gases and in such quantity, it must have formed very early in the solar system’s history.  Jupiter’s enormous mass prevents the loss of even the light elements of its atmosphere, the gas giant holds clues about the origin of the solar system. As the nearest giant planet, studying Jupiter can also provide insight into planetary systems around other stars.  NASA has been intensely studying Jupiter with its Juno probe and, if you haven’t already, I urge you to seek out some of the images of the planet taken with the probe’s Juno Cam. 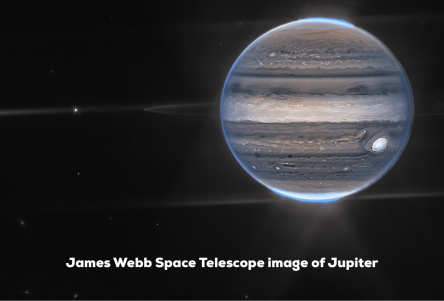 Not to be outdone, engineers with the James Webb Space Telescope, in order to test the scope’s tracking capability, aimed the JWST at Jupiter and the results are nothing short of stunning.  Various citizen scientists who are used to working with space-based data, hopped onto the raw image and processed it to great effect.  This image was processed by Judy Schmidt and her image clearly shows Jupiter’s dust ring (first discovered by the Voyager spacecraft back in 1979), amazing details in the Jovian atmosphere, and several of the planet’s moons (including Europa off to the left of the image. 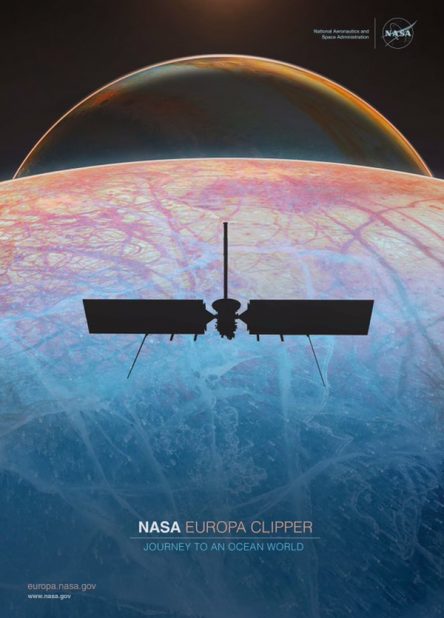 The next NASA mission to Jupiter is one that I am personally excited about.  In October of 2024, the agency is scheduled to launch the Europa Clipper, a spacecraft that will orbit the icy moon to see if it could have conditions suitable for life.  Due to tidal interactions with the planet, we have good evidence that there is a subsurface ocean beneath Europa’s ice coated exterior.  Something to think about as you observe Jupiter in both awe and wonder.