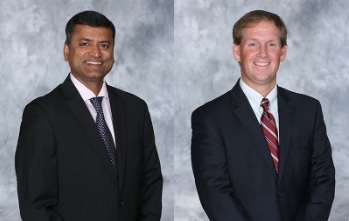 The University of Arkansas at Little Rock College of Business will honor two Little Rock businessmen at its Distinguished Alumni Luncheon on Oct. 23. Jay Heflin with Legacy Termite and Pest Control has been named Distinguished Alumnus of the Year, and Welspun Chief Operating Officer Rajesh Chokhani will receive the the Dean’s Award for Excellence.

The award luncheon, sponsored by Legacy Termite and Pest Control, will be held at the Little Rock Marriott, 3 Statehouse Plaza. Registration opens at 10:45 a.m. with lunch served at 11:30 a.m.

The Distinguished Alumni Award, the highest honor granted by the UA Little Rock College of Business, is given to a graduate who has made a significant impact in business or a nonprofit organization and has served the Little Rock community and UA Little Rock.

Heflin is vice president of administration for Legacy Termite and Pest Control, a company he and his brother, Marc Heflin, and friend, Chris Maloch, founded in 2009. The Heflin brothers are third-generation pest control business owners who have followed in the footsteps of their grandfather, John Heflin Sr., and father, Johnny Heflin Jr.

The company, which celebrates its 10th anniversary this year, has five offices throughout central Arkansas and employs 30 people.

Heflin earned a bachelor’s degree in general business from Ouachita Baptist University and an MBA from UA Little Rock in 1994.

“It helped tremendously,” Heflin said of his graduate work. “UA Little Rock is big, but there was a tight-knit community of professionals within the College of Business.”

Heflin is a graduate of Leadership Greater Little Rock Class XII. He is a member of the UA Little Rock Business Advisory Council, PARK Foundation, Arkansas Pest Management Association Board, chair of Easterseals Arkansas board, chair of the Arkansas Junior Competitive Tennis Council board, and a member of Second Baptist Church.

Rajesh Chokhani, chief operating officer of Welspun (USA), is this year’s recipient of the Dean’s Award for Excellence. The award is granted to a graduate of the past 10 years who has shown promise as a leader in business or nonprofit work and who is actively involved in serving Little Rock and the university.

Chokhani has worked 25 years for Welspun, an India-based global company that employs more than 27,000 people at its pipe manufacturing, steel, and textile plants around the world. The company has produced enough pipe to stretch 8656 miles, the distance between Houston and Dubai. The company also holds records for manufacturing the heaviest pipe, the highest altitude pipe, and the longest pipeline in the world.

Chokhani first came to the U.S. in 2007 in search of a site to expand Welpun’s pipe manufacturing. He chose Little Rock for the plant, investing more than $300 million into the site which employs 1,100 people.

Chokhani had planned to attend graduate school in India but discovered UA Little Rock’s MBA program. At the time, he was working about 80 hours a week during the two-year construction phase of Welspun’s Little Rock plant, but as soon as the project was complete, he enrolled in the graduate program. He was still traveling significantly for business and still carved out time to attend classes and study.

Since then, Chokhani has stayed active in the UA Little Rock community. He is involved with the College of Engineering and Information Technology since engineering is the base for manufacturing.

“I’ve enjoyed the opportunity to meet with students,” he said. “Students seem so much more prepared now. They seem to know what they want, and they seem more involved with the community at large. I think the College of Business does a good job of getting students to serve beyond school.”

“Rajesh Chokhani typifies a successful MBA,” Wayland said. “He understands the success of a business depends on the economic development in the region and, therefore, is a strong advocate for Little Rock. He is active in the community and is the perfect role model for our students.”

Tickets to the College of Business Distinguished Alumni Luncheon are $125 each and are available at ualr.at/cobluncheon. For more information, contact Dr. Wayland at 501-916-3356 or jpwayland@ualr.edu.