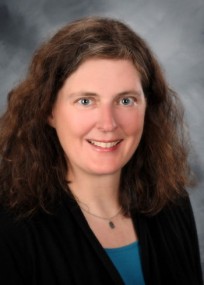 Dr. Margaret “Beth” E. McMillan, an associate professor in the Department of Earth Science, has made extensive use of a National Science Foundation-funded project, “On the Cutting Edge,” to assess learning outcomes.

Iraq war veteran Hilary Hekel, a non-traditional student in the Geospatial Technology Graduate Certificate program, credits the skills he learned under McMillan to his employment with the FBI.

“Her insistence that we learn the processes from the ground up was instrumental in helping us learn not just the ‘what,’ but the ‘why,’” he said.

As a professor in the Donaghey Scholars Program, McMillan is said to extend her reach beyond geoscience majors. Anthropology major Mackie O’Hara said both courses she took under McMillan shaped the way she interacted with the world, including a course that focused on analyzing media’s coverage of hot-button issues such as climate change, evolution, and atomic radiation.

Senior geology major John Hutchison agreed that two specific qualities make McMillan an excellent teacher: First, her integration of student knowledge with practical applications, and second, her emphasis on how certain skills are marketable and desired by employers.

“This is her most distinguishing trait – she does not care to simply teach her classes but more so to prepare students to compete in the job market,” he said.

Bookmark the permalink.
Posted in: 2013, Teaching