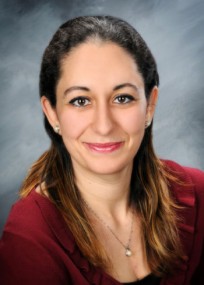 Think of a gene regulatory network as a robust neighborhood in which thousands of residents get along fairly well. Then imagine the disruption created when certain entities do not cooperate and intervention is required to bring order to the surrounding area.

That is the role Dr. Nidhal Bouaynaya steps into every day as she seeks to develop better methods for intervening in living organisms when they have gone awry.

“She has gained a well-earned national and international reputation for her unique expertise and exceptional research skills,” said Dr. Seshadri Mohan, chair of the systems engineering department. “I unreservedly believe her research work will continue to be beneficial to the global scientific and engineering communities.”

As principal investigator of a million-dollar National Institute of Health research award, Dr. Bouaynaya’s research on the human melanoma gene regulatory network proposes something rather novel—intervene just once and force the network away from metastasis into a benign cellular state.

Dr. Bouaynaya has also led a multi-campus, multi-state white paper proposal, which was recently selected among four top white papers in the state. The proposal will be considered for the prestigious National Science Foundation-Experimental Program to Stimulate Competitive Research. She is also serving as principal investigator for The Kathleen Thomson-Hall Charitable Grant, which proposes the creation of virtual Intensive Care Units to enable real-time patient data by using secure wireless body sensors from remote locations like disaster areas.

Her funded research work with undergraduate students, especially students from under-represented communities, has been crucial for retention and graduation. As a McNair Scholars’ mentor, she supervised the research progress in preparation for doctoral studies, and she has been principal investigator for five Summer Undergraduate Research Fellowships.

Additionally, her research has resulted in new state funding, new collaborations, and numerous mentions in highly ranked journals, among them IEEE Signal Processing Magazine and Bioinformatics. She has published more than 50 peer-reviewed articles, on topics such as signal and image processing. Her work has been cited more than 200 times, according to the Google Scholars citation index.