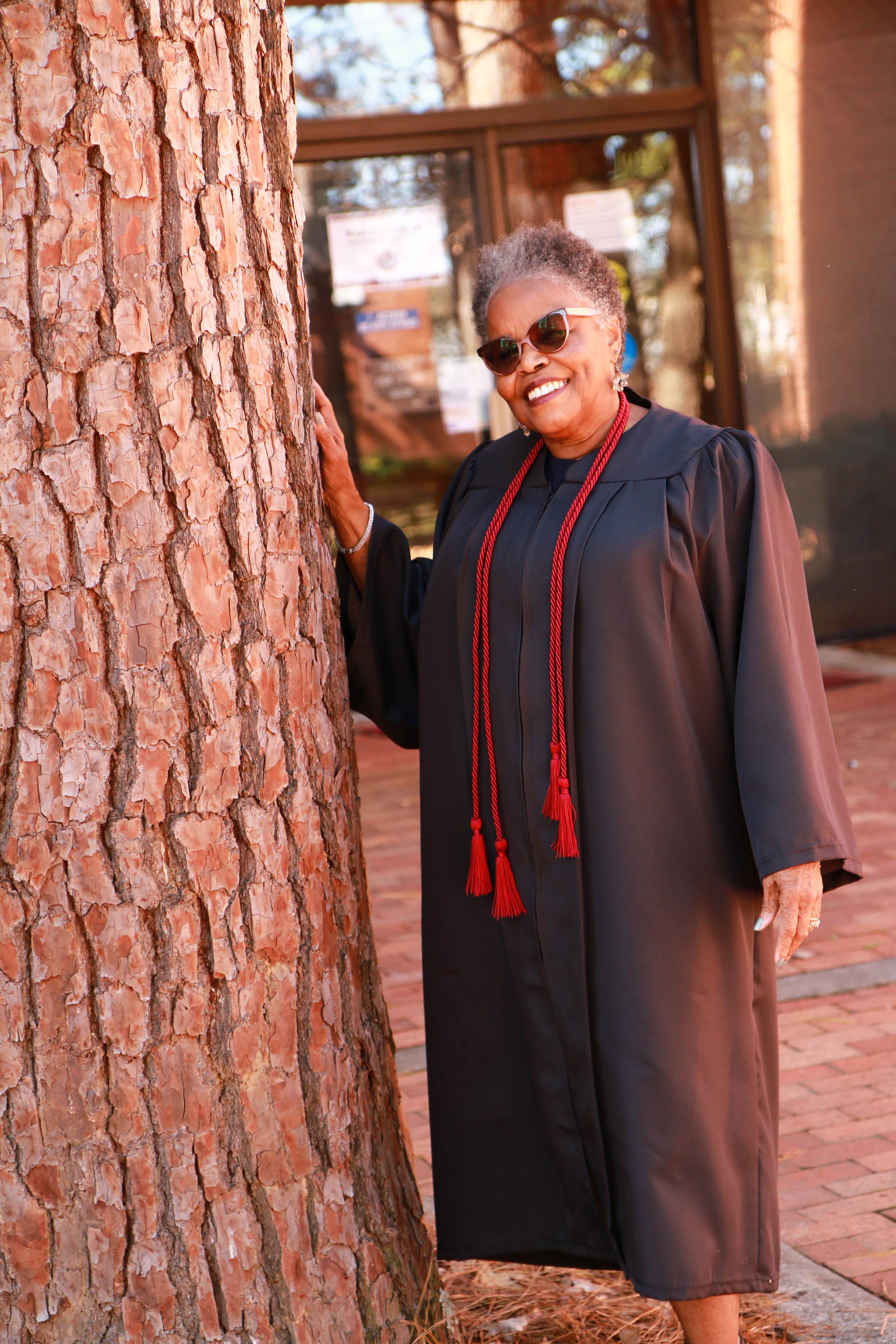 At 73, Carolyn Wilkerson has completed her lifelong dream of earning a bachelor’s degree.

“My journey has been one the most rewarding personal decisions that I’ve ever made,” Wilkerson said. “This is probably the only major milestone that I have ever established for myself. I’ve done some things that I think are monumental but nothing of this magnitude, especially at my age. This has been quite rewarding. It’s been a phenomenal journey.”

The Little Rock native will graduate with a bachelor’s degree in applied communication and a minor in sociology this month from the University of Arkansas at Little Rock.

Wilkerson joined UA Little Rock in 2016, fulfilling a promise she made to herself many years ago.

“I didn’t go to college when I graduated high school,” she said. “I always said to myself that when I retire, I am going to go to college. After I retired, my daughter opened a daycare, and I started helping her. Then my children reminded me that I said I was going to go. I always wanted a college degree.”

Having graduated from Little Rock’s Horace Mann High School in 1965, Wilkerson is the third of her high school classmates who have graduated from UA Little Rock in recent years, including Philip Bryant in 2016 and Vivian Littrell in 2019.

“When I came out of high school, I went to vocational school and I ended up with a very nice job,” Wilkerson said. “Once you get into the job market and you make good money, it’s hard to quit to go to school, especially as a mother and wife. I had a friend who encouraged me to go, Philip Bryant.”

Being the eldest of eight children and only the second to earn a college degree, Wilkerson said her extended family has mixed views on her decision to pursue a college degree at 68.

“Needless to say, every possible mental reason not to attend surfaced, reminding me of the time span, the young students on campus, and that real loud voice that said ‘You’re a grandmother,’” she said. “A couple of my sisters and some of my family members think I am crazy. They couldn’t believe I would do this at my age. This is something I wanted to do for me, not for anybody else.”

Wilkerson and her husband, Ronald, pastor of Faith Temple Deliverance Church of God in Christ, have a blended family with a total of seven children, 24 grandchildren, and seven great-grandchildren.

Wilkerson has found several mentors on her road to success.

“In applied communication, I would say my mentors are Dr. April Chatham-Carpenter and Dr. Kristen McIntyre,” Wilkerson said. “They were both phenomenal. Dr. McIntyre was the biggest cheerleader you could ever have. They just don’t get any better than Dr. David Briscoe in sociology. When I hit a slump, Ida Humphrey (senior instructor in mathematics and statistics) was my go-to professor.”

McIntyre, professor of applied communication and director of the UA Little Rock Communication Skill Center, said that Wilkerson helped many students find confidence during her time as an intern at the center.

“Carolyn’s joy and enthusiasm for learning is contagious,” McIntyre said. “She’s always willing to try new things, tackling whatever challenges cross her path with grace and humor. She’s an amazing support to her classmates. During her time as a CSC intern, she was a favorite among students seeking help on their ACOM 1300 assignments. So much so, Carolyn inspired one of the incredibly anxious ACOM 1300 students she helped to join the CSC staff so she could continue building her communication skills and pass on that same support she received from Carolyn to others.”

Now that her education is complete, Wilkerson will use her education to help students who attend the city-sponsored youth program, Bridge 2 Success, which she has been helping to run since her husband started the program in 2011. The program serves at-risk youth ages 13-19 in Little Rock. She also wants to use her degree to help people and “do something that will make a difference in the community.”

As she reflects on her long road to a college degree, Wilkerson has the following advice for college students.

“I would say, especially for young people, that it is a mistake to doubt your capabilities,” Wilkerson said. “As a young woman, I doubted my ability to get into a college arena and really excel. As a senior citizen, I would say that it’s never too late to learn. I wouldn’t know if I hadn’t dared myself to take an adventure that most normally don’t take at my age. I don’t think anyone that wants a degree can’t get it. If I can do it, I believe anyone can do it.”