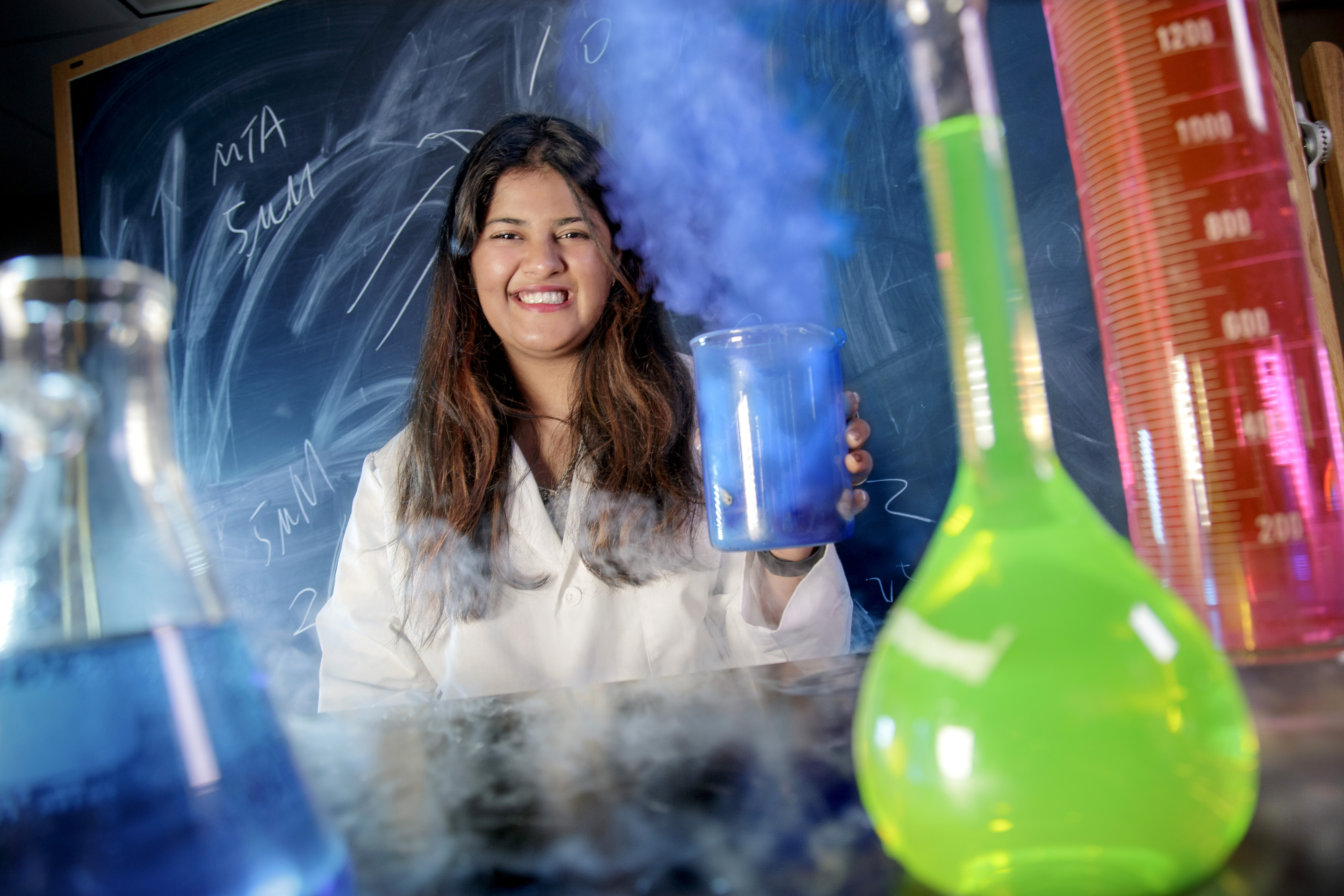 The impressive achievements of future doctor Stuti Chatterjee have earned her the honor of the 2021 Edward L. Whitbeck Memorial Award at the University of Arkansas at Little Rock.

Frank L. and Beverly Whitbeck established the award in memory of their son, Edward Lynn Whitbeck, who was a senior at Little Rock University, the predecessor of UA Little Rock, at the time of his death in 1965. Each scholar receives a personalized plaque and a monetary award.

“The Whitbeck Award is given to the outstanding graduating senior,” said Dr. Simon Hawkins, director of the Donaghey Scholars Honors Program. “Stuti is outstanding in so many ways, but more than that, she is inspirational. She represents the best of UA Little Rock. Stuti’s education has changed her. It has given her so much, and she has given so much back to the university and the larger community.”

Chatterjee, a Donaghey Scholar from Bryant, earned the Whitbeck Award while double majoring in chemistry and biology at UA Little Rock. After graduation, Chatterjee will be taking a gap year to work and to study for the Medical College Admission Test (MCAT) before going to medical school in the fall 2022 semester.

“I think that medicine is one of those fields where you never stop learning,” she said. “It’s also one of the most giving fields. Showing empathy and compassion is something you don’t get to do at all jobs.”

While at UA Little Rock, Chatterjee worked with Dr. Noureen Siraj, assistant professor of chemistry, to study the use of nanodrugs for effective cancer cell therapies.

“I created a more non-invasive approach to treat cancer cells,” Chatterjee said. “Usually nanoparticles that are used to treat cancer are made out of gold. It works, but it’s very expensive. We are looking for organic elements that can be exchanged for gold in nanoparticles.”

Her research project, “Tunable sized combination nanodrugs based on ionic materials,” has earned Chatterjee a second place award at the Student Research and Creative Works Expo at UA Little Rock as well as an honorable mention for the INBRE (Idea Networks of Biomedical Research Excellence) Conference this year. She was also named the 2020 Outstanding Undergraduate Research Student for the Department of Chemistry.

Even though she has received many accolades for her research on how to treat cancer using nanotechnology, Chatterjee is planning to specialize in pediatrics. A native of India, Chatterjee moved to Arkansas with her family when she was just 10 years old. Her father had received a job offer in Arkansas, and the move also provided the opportunity for better medical treatment for her brother, Sanidhya.

“My brother had a brain hemorrhage when he was a child,” she said. “My parents thought he would have a better chance for treatment in the U.S. That is another thing that made me want to go into medicine. It was a doctor’s mistake that caused his hemorrhage, but it was also a doctor that fixed it. I saw firsthand the damage it can cause, but I also saw how that medical knowledge can be used to help someone.”

Chatterjee also thanked her parents, Monish and Atima Chatterjee, for being a huge source of support as she finished her bachelor’s degrees.

“I want to include my parents as role models who helped me succeed in college,” she said. “They have supported me so much by calling me and bringing in food. They have made my life easier by helping me do what I need to do.”

In the healthcare field, Chatterjee also works with Dr. Meghan Wilson, a rehabilitation medicine physician at UAMS who has tetraplegia from a spinal cord injury. Chatterjee assists Dr. Wilson with daily activities as well as clinical work by writing notes, performing patient exams, and conducting rounds on patients.

“Stuti is able to empathize and show compassion when needed but is also focused and gets things done in an efficient manner,” Wilson said. “She asks questions about different diagnoses and is genuinely interested in my approach throughout the day. Her compassion and curiosity are what make her stand out from her fellow coworkers. Whether our team has 12 or 5 patients, Stuti is able to work with the same enthusiasm. She has also been kind and supportive when I have gone through difficult times, and I believe she has a genuine passion for helping others.”

A firm believer in empowering women in STEM, Chatterjee volunteered with Girls of Promise while at UA Little Rock, though she has been an advocate for much longer.

“When I was in high school, there were no women in my robotics program,” she said. “I started my own all-girls robotics team. It seemed like a boys club, and I didn’t want that to deter the girls from participating. We ended up going to the world competition.”

During her time at UA Little Rock, Chatterjee has also served on the Student Government Association and learned Python to code a camera to monitor the Arkansas River for a professor’s research project. In healthcare, she worked as a research associate at UAMS. Her supervisor, Dr. Michael Wilson, hired her to copy edit his book, “Behavioral Emergencies for the Healthcare Provider.”

“Looking back at my achievements, I have been driven not only by my passion for science but by using that passion to give back to the community,” Chatterjee said. “Through my involvement within various organizations and performing well in academics, I hope to inspire and pave the way for the future classes of UA Little Rock.”