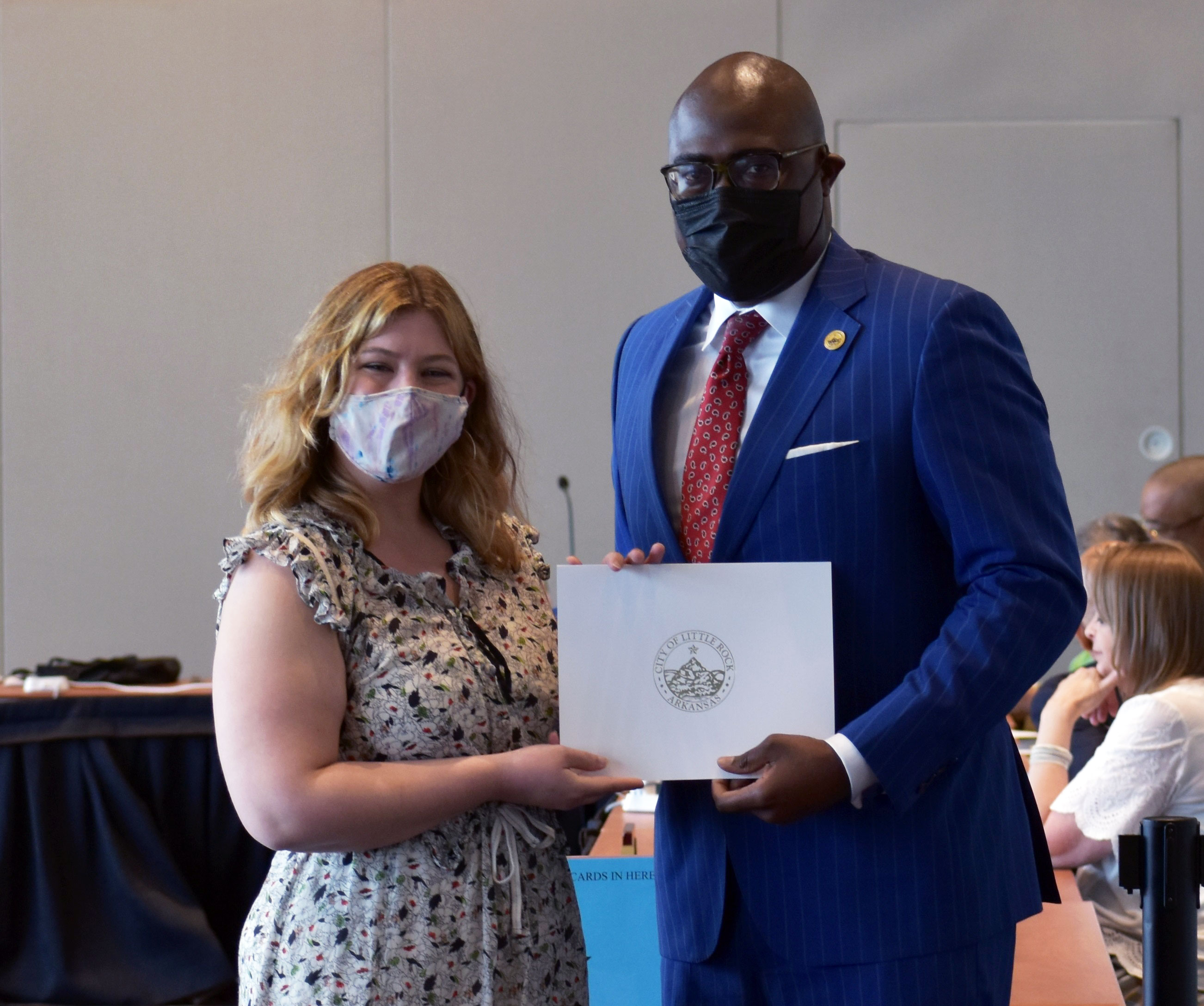 Geneva Galloway, administrative specialist for the Donaghey Scholars Honors Program, is one of the first graduates of the City of Little Rock’s new R.O.C.K. (Residents Obtaining Community Knowledge) Academy.

“I have been on this journey of civic engagement since about 2016,” said Galloway, who participated in the second academy cohort. “I saw this as an opportunity to get more involved with the city. Through serving as a board member on my neighborhood association in Broadmoor and through my work at UA Little Rock, I have found that I can make the biggest difference right here in my own backyard.”

The City of Little Rock launched its new R.O.C.K. Academy community education course on civic engagement in fall 2020 to cultivate understanding and enhance the relationship between city government and its residents.

“R.O.C.K. is an acronym for Residents Obtaining Community Knowledge,” Mayor Frank Scott Jr. said in a press release. “We wanted a way to cultivate understanding and enhance the relationship between City government and its residents. R.O.C.K. Academy will give residents an up-close look at how their City government works and we hope it will act as a catalyst that prompts civic engagement through service on our boards and commissions.”

As a member of the Broadmoor Property Owners Association, Galloway said she was inspired to participate in the academy to learn how to become more engaged with the city and to be a better advocate for its citizens.

“I want to be someone that can be a resource and an advocate for the city and for the services that I don’t think residents know are at their disposal,” she said. “For example, my mom raises my 8-year-old niece, and she’s a full-time nurse. The summer is coming up, and childcare is very expensive and difficult to figure out. The city offers a summer youth playground program. They create a safe environment where families can bring their kids during the work day. The kids get the opportunity to participate in different recreational activities, including field trips around the city to places like MacArthur Museum of Military History and the Clinton Presidential Library. This is one example of a program that I had no idea the city offered and that more people should know about.”

During the seven-week program, residents gain knowledge and insight through discussions, virtual demonstrations and virtual site visits, both in-person and via virtual instruction that includes virtual field trips capped with a “graduation” held at a City Board of Directors meeting on May 18.

One of the lessons that Galloway learned through the academy is that there are many ways to practice civic engagement.

“One of the coolest things is that they asked us to go spend a small amount of money in a different ward than the one we live in,” she said. “I went and had a delicious lunch at La Vaquera Taqueria located in Ward 7 on Chicot Road. That positive experience taught me that civic engagement can be as simple as spending money in a part of the city that you don’t visit frequently.”

Having grown up in Little Rock, there are so many parts of the city that I hadn’t visited up until my 20s. It reinforced that there is a disconnect that people might have in different areas of the city. If you join the academy, you learn about the different wards, and it gives you a reason to go and check them out.”

Once Galloway has finished her term on Broadmoor’s neighborhood association, she is planning to put her new knowledge to work by serving on one of Little Rock’s city commissions.

“I’ve learned there are many ways to serve that can have a lasting impact,” she said. “There are so many more things that we can do other than voting to be civically engaged. After I finish my term on the neighborhood association, a city commission is the next way that I’d like to be able to participate.”