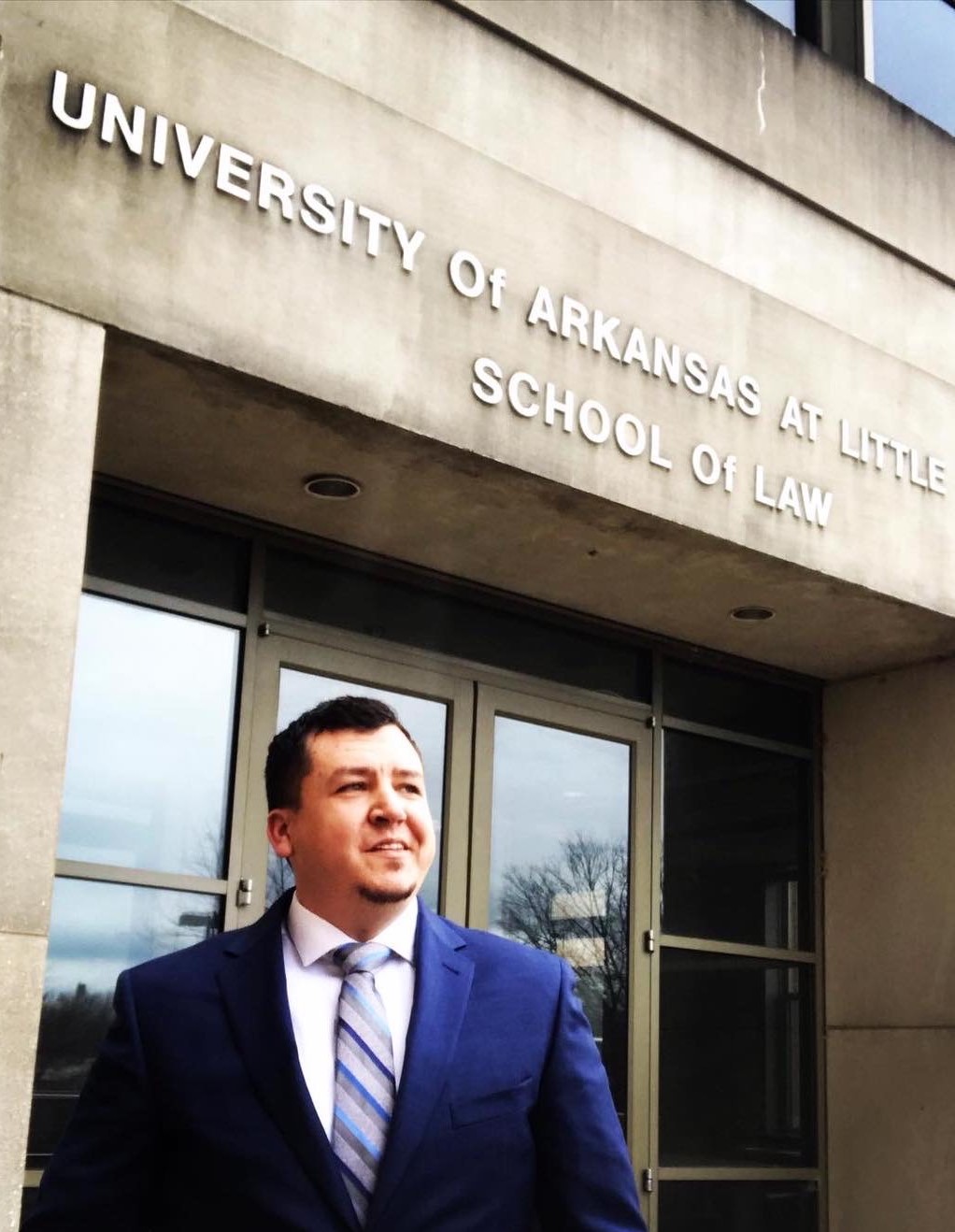 Caleb Alexander-McKinzie, a third-year student at the UA Little Rock William H.  Bowen School of Law, has been recognized by National Jurist Magazine as one of the top 10 law students of the year.

Alexander-McKinzie grew up in DeValls Bluff, graduated from high school in Des Arc, and started college at UCA immediately after graduation. But soon after starting, he realized he needed a break. That break turned into a 10-year hiatus.

During that time, Alexander-McKinzie worked in industrial construction and Live Immersive Training for a military contractor. These jobs meant wide travel, good pay, and a few months of down time each year. During his time off, he began volunteering with The Van, a Central Arkansas nonprofit that serves the unsheltered community, building relationships and meeting the immediate material needs of people experiencing homelessness.

The goal is simple: Meet people where they are with what they need. No questions. No apologies. Just help. As Alexander-McKinzie built relationships, he found a continuing thread through each story – many people were experiencing homelessness due to a bad experience with the legal system in some capacity.

“My goal was always law school after I met my friends in the unsheltered community,” he said. “The law has to be punitive sometimes, but it doesn’t need to be debilitative. The law shouldn’t be a catalyst to extreme poverty or a barrier that locks people into a crippling cycle of economic destitution.”

That realization led him back to college at UA Little Rock to finish his undergraduate degree and then to Bowen for law school.

“So much of what I want to do is affected by how the constitution is interpreted,” he explained. “Both with the unsheltered community and as a gay man who lives in the south.”

Alexander-McKinzie sees the two topics as being elaborately intertwined. The LGBTQ+ community is disproportionately represented among those who lack shelter. For him, they are two parts of a larger issue.

Alexander-McKinzie is a past president of Bowen’s OutLaw Legal Society, having served in this role during his second year. He decided not to serve a second term because he believes the group is stronger if they can provide leadership growth for first and second-year members.

“I ran for and was elected secretary, and I’m still very much involved with the organization,” he said.

That involvement has led to one of his favorite law school experiences. Due in part to the virtual meeting format required by Covid, OutLaw was able to host a discussion on proposed hate-crime legislation in Arkansas and how, at that time, Arkansas was one of three states that didn’t have any such legislation. Panelists including historians, human rights campaigners, constitutional law scholars, and a bipartisan group of Arkansas legislators. Attendees were able to give input to legislators about the legislation they were drafting.

In addition to his work with OutLaw, Alexander-McKinzie clerked at the Arkansas Municipal League this summer. He served as an inquiry clerk, fielding legal questions from cities/towns in Arkansas and researching answers to those questions. He also helped counsel draft and craft legislation and spoke with all levels of government about the impact of legislation.

“I loved helping the League further their mission of making sure Arkansas municipal bodies have a voice in legislation,” he said. “For me, positive change starts with good policy.”

Over the past year, he also helped found and continues to serve on the board of directors of Arkansans for Stronger Communities, a nonprofit organization advocating for and helping to craft legislation to change the landlord-tenant laws in Arkansas. The group’s efforts were influential in a piece of legislation that serves as a foundation for change in Arkansas landlord-tenant law.

“We are closer now than ever before in joining 49 other states who protect tenants with a functional Warranty of Habitability,” he said. “If you want to make homelessness brief and rare, you start with affordable and safe housing options. I’ve had people contact me for tents and sleeping bags because the structures they were renting were unsafe and unsound. They had to choose between their health and homelessness. That’s a crushing choice.”

He’s also still heavily involved with The Van. He drives to the unsheltered communities most weekends, taking them clothing, hygiene items, and camping supplies.

“Law students will sometimes see me in the park talking with community members who happen to be unsheltered,” he said. “They always look worried until I tell them, ‘It’s good. I know that guy. I was just taking him a pair of pants.’”

In addition to his law school studies and his work, Alexander-McKinzie and a panel of friends host a podcast—Southern Fried Geekery. The group of professionals talk about comics and graphic novels. It’s a life-long passion for him.

“My obsession started with superheroes, as most collectors do, but it grew from there, again as most do,” he said. “Comics are a story-telling medium. It’s not a genre – it encompasses all genres. It’s a different way of telling a story and presenting a theme that may, at times, be easier to understand. That doesn’t make it any less serious as a critique.”

His post-graduation plan is to stay in Little Rock. His husband has a career here as a registered nurse. They met in 2011 and were married in 2016. In addition to Roger and their three dogs, the people The Van helps are here. The work is here.

“I want to stay local and help those people overcome extreme poverty and homelessness,” he said. “I don’t want to leave LGBTQ kids who can’t leave the state behind. I don’t want to leave folks living outside. Renters need protections in my neighborhood. These are the people who inspired me to get this far, and I owe it to these folks to use the tools I’ve been given here at home. I don’t know if I can make a dent in it, but I’m certainly going to try.”