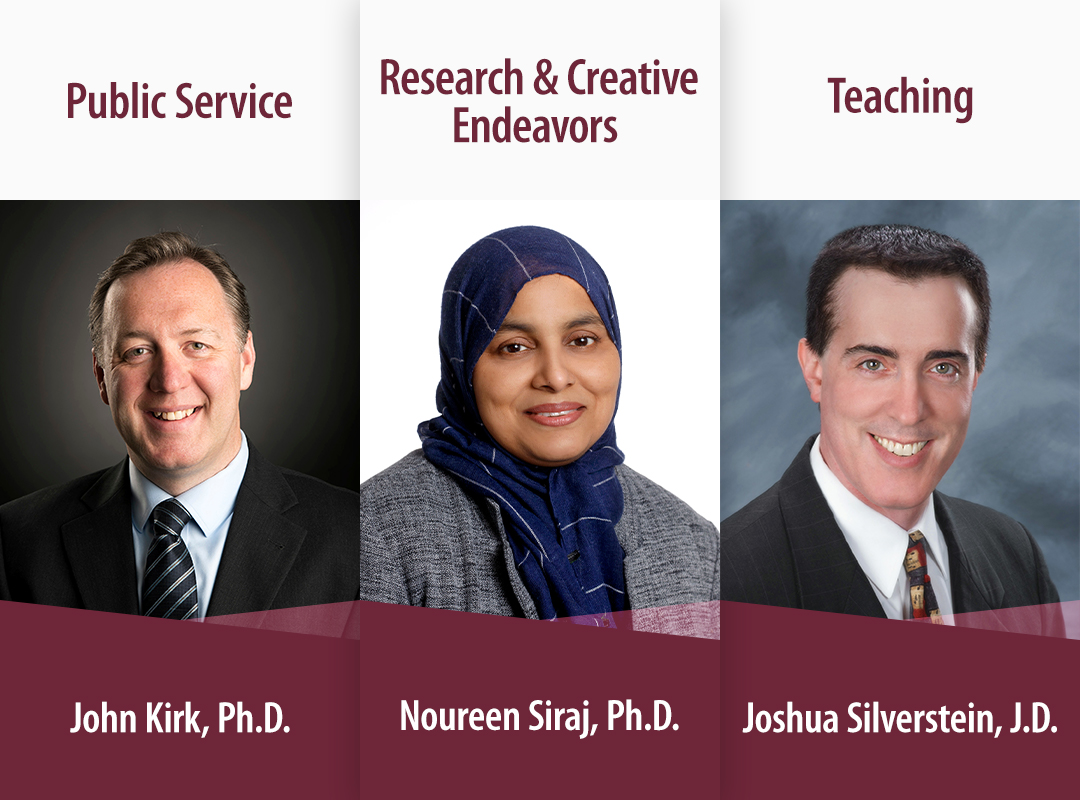 The University of Arkansas at Little Rock has chosen Joshua Silverstein, Noureen Siraj, and John Kirk as the 2022 winners of the Faculty Excellence Awards.

Silverstein, a professor at the William H. Bowen School of Law, has won the Faculty Excellence Award in Teaching. He has gained a reputation among students and colleagues as a stellar educator who goes to great lengths to ensure the success of his students.

Siraj, assistant professor in the Department of Chemistry, has received the Faculty Excellence Award in Research and Creative Endeavors. With her research being cited more than 700 times since 2016, Siraj is a well-respected researcher in the development of nanomaterials for biomedical applications and solar cell applications.

Kirk, George W. Donaghey Distinguished Professor of History, has been awarded the Faculty Excellence Award in Public Service. Ever since Kirk arrived at UA Little Rock 11 years ago, his extensive service and research has been dedicated to unveiling the history of the Arkansas fight for civil rights against the brutality of racial injustice.

“Our faculty excellence winners represent the university’s commitment to superb instruction, outstanding research, and community service,” Provost Ann Bain said. “Each of the winners has made immeasurable contributions to the UA Little Rock community and to the lives of their students and colleagues. We thank them for their service.”

The UA Little Rock Board of Visitors selected the university-wide winners from the 12 faculty members who were selected as the top faculty members for the 2021-22 academic year in each of the three categories in their respective colleges and the William H. Bowen School of Law.

Silverstein’s students and colleagues describe him as a stellar educator with a wealth of knowledge and genuine interest in guiding students effectively throughout their studies.

Tori Percifield, a former student, described Silverstein as “quite simply the best teacher I have ever had.” His strengths as a teacher include “immeasurable enthusiasm, meticulous organization, limitless knowledge, and genuine compassion for the students.”

Those traits are repeated in former students’ letters of endorsement. They discuss Silverstein’s passion for teaching, his engaging presentation of complex topics, and his commitment to ensuring they fully comprehend the material, including his extensive use of visual aids.

Michael Hunter Schwartz, former dean of the William H. Bowen School of Law, described Silverstein’s student evaluations as “the highest I have ever seen for any Bowen faculty member.”

In 2021, Silverstein was chosen by Bowen students as the first law school recipient of the We HEART Faculty Award. This is the second time he has been recognized for excellence in teaching.

Silverstein received a J.D. from the New York University School of Law and a bachelor’s degree from Hamilton College in Clinton, New York.

Siraj has developed a reputation as a prolific researcher in the development of nanomaterials for biomedical applications and solar cell applications. In the past five years, she has received more than $570,000 in funding from federal, state, and local agencies, including a nearly $190,000 grant from the National Science Foundation for the “Synthesis, Characterization, and Application of FRET based Ionic Materials.”

Over the past five years, Siraj has published 34 peer-reviewed papers, given 59 conference presentations, mentored six Ph.D. students and 18 undergraduate students, and served on eight Ph.D. committees. Her research has been cited more than 700 times since 2016.

In order to promote STEM education, Siraj begins mentoring students in middle school, at a time when some students, especially girls, begin to lose interest in the sciences. She has hosted 19 middle and high school students for their science fair projects. In 2018, Meghana Bollimpalli, one of Siraj’s mentees from Central High School, earned more than $58,000 in scholarships for her science fair project at the Intel International Science and Engineering Fair. Meanwhile, Stuti Chaterjee, who worked in Siraj’s lab, won the 2021 Whitbeck Memorial Award, the highest award granted to a graduating student from UA Little Rock.

“Dr. Siraj is an outstanding scientist and one of the best researchers on our campus,” said Dr. Brian Berry, vice provost for research and dean of the Graduate School. “Dr. Siraj has leveraged her expertise in frozen ionic liquids to develop a very active research group. The work of this group is nationally and internationally known. Out of all the faculty members that I have observed since joining UA Little Rock, she is one of the most promising.”

A scholar of the civil rights movement, Kirk has previously served five years as chair of the Department of History and four years as the director of the former Anderson Institute on Race and Ethnicity, where he helped develop the award-winning Arkansas Civil Rights Heritage Trail.

Kirk helped a dedicated Arkansan, Leatrice Russ-Glenns, gain recognition for the life of her brother, Carnell Russ, who was killed by the police in Star City, Arkansas, in 1971. Kirk researched and wrote articles about Russ in the Arkansas Times and Arkansas Historic Quarterly and helped establish the Carnell Russ Day Community Unity Festival in Star City, which offers a series of events to bring together the Black and white residents of the community.

Kirk has also hosted “Arkansas Moments,” a show on KUAR, UA Little Rock’s National Public Radio affiliate, for 10 years. He has researched and written more than 100 radio segments that provide lessons on civil rights and Black history. Since 2004, Kirk has served on the editorial board of the Arkansas Historical Quarterly, the premier journal for historical studies in the state.

“John has been one of the finest and most prolific scholars in the fields of Arkansas and U.S. civil rights history,” said Patrick Williams, editor of Arkansas Historical Quarterly. “Over the past quarter-century, he has been among the most frequently published authors in the Arkansas Historical Quarterly, offering deeply researched and skillfully crafted studies on such topics as the desegregation of the state’s schools and public facilities, race and urban development in Little Rock, the Black Power movement, and policing and the African American community. His books and essays have repeatedly been honored for excellence, winning four of the Arkansas Historical Association’s top prizes.”

Kirk’s newest book, “Winthrop Rockefeller: From New Yorker to Arkansawyer, 1912-1956,” examines the first 44 years of former Arkansas governor Winthrop Rockefeller’s life. It also looks into the history of Rockefeller’s work with civil rights and race relations. It began in New York, where he served on the executive board of the National Urban League, a leading organization in the civil rights movement. Rockefeller took an active and enthusiastic interest in its affairs and made a donation to pay for the Urban League’s new national headquarters just before he moved to Arkansas.