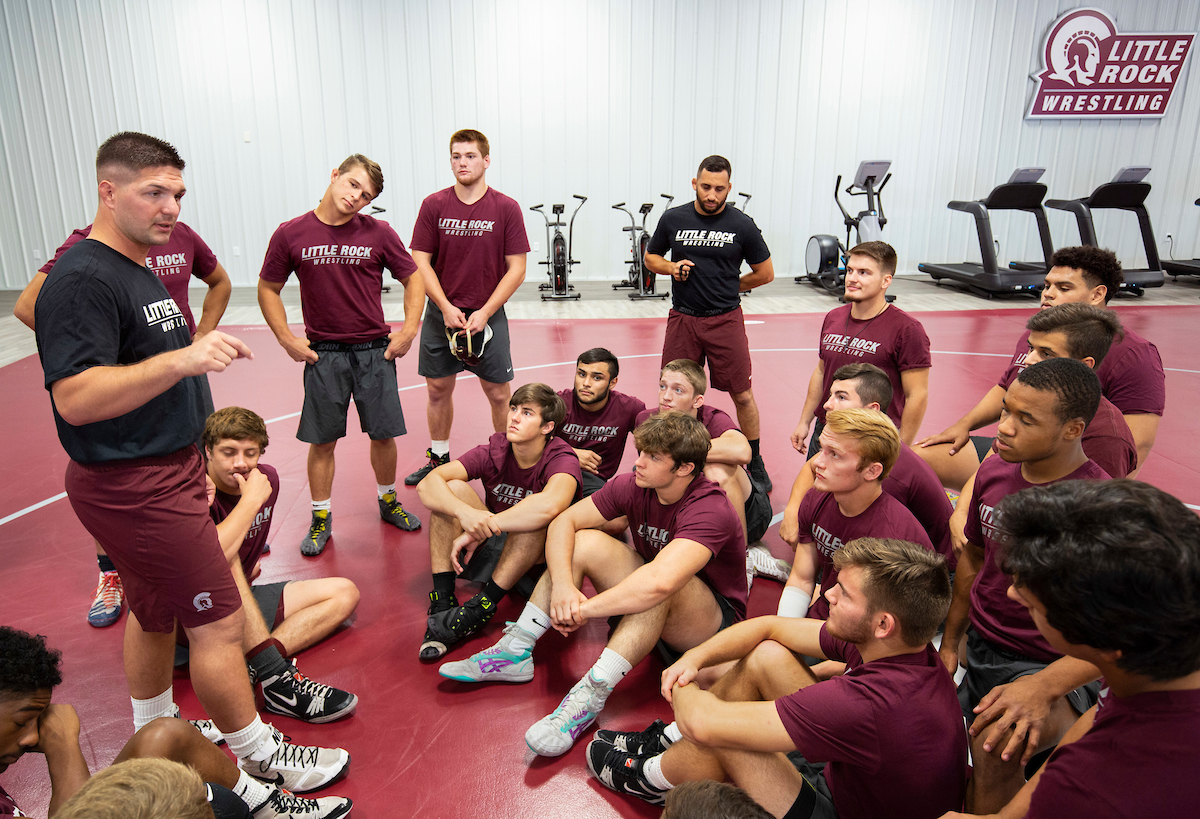 April 3 started out as a typical Sunday for UA Little Rock Wrestling Coach Neil Erisman, but the day would end with what Erisman describes as a miracle.

While driving his sons and their friend to New Life Church Greater Little Rock in North Little Rock, Erisman noticed a woman parked in front of a bank in Maumelle struggling to help a young girl. Erisman immediately turned his car around to help.

“I had three little boys with me, and I told them to close their eyes because I didn’t know what I was getting into,” Erisman said. “I came around their van and saw a young girl who appeared to be conscious, and her mother was talking to 911, exhausted and crying.”

Rachel Brewer had bought her daughter, Ava, some donut holes. While going through Zips Car Wash, Rachel noticed her daughter was gagging and choking. Rachel got Ava out of the car to help her, but Ava passed out. While Rachel spoke to 911, Erisman arrived and began the Heimlich maneuver.

“At this point, I was by myself with a woman who was trying to save her daughter and what felt like a lifeless body,” Erisman said. “Then I saw a lady I knew pull out of the car wash. Her son plays soccer with my son, and she just so happened to have previously been a CPR instructor at Baptist Health.”

The arrival of Catie Tugwell on scene seemed like a Godsend to Erisman, who worried that Ava wasn’t responding to the Heimlich maneuver.

“It didn’t look good. We didn’t know if she would make it at that point,” Erisman said. “When Catie got there, things changed. We started doing CPR, and we saw the life come back to her face. There was a while that we didn’t think that was going to happen.”

Shortly after Ava started responding, the Maumelle Fire Department and an ambulance arrived. First responders took over Ava’s care, and she was taken to the hospital. Thankfully, Ava recovered and was released from the hospital that evening.

“It’s probably the hardest thing I’ve ever done,” Erisman said. “I was exhausted. It was probably only 8-10 minutes, but it was like I had wrestled the national tournament eight times over in one day. I was grateful that God gave me the whereabouts to see it and the courage to follow through.”

Rachel Brewer shared her story with THV11, who honored Erisman and Tugwell as Arkansans of the Day.

“I love that these amazing people were honored and recognized last night! Thank you, Lord, for orchestrating them being there when we needed them,” Rachel Brewer posted on Facebook.

Once the ambulance took Ava to the hospital, Erisman texted his wife, Kelli, who he was sure must be worried that the family hadn’t made it to church. In another twist, it turns out that the Brewers and Erismans go to the same church.

Looking back on the day, Erisman is certain that God had a hand in saving Ava’s life.

“I’m very punctual when it comes to going to church, and I was okay with being late to church for the first time ever,” Erisman said. “I think God’s timing allowed me to be in that position. I don’t really want any of the credit. All I did was act on God’s prompting. I remember praying in the middle of it. What are the odds that I would be there? What are the odds that someone who has taught CPR shows up at the right moment? It’s a miracle for Ava to be okay after being without oxygen for that long.”