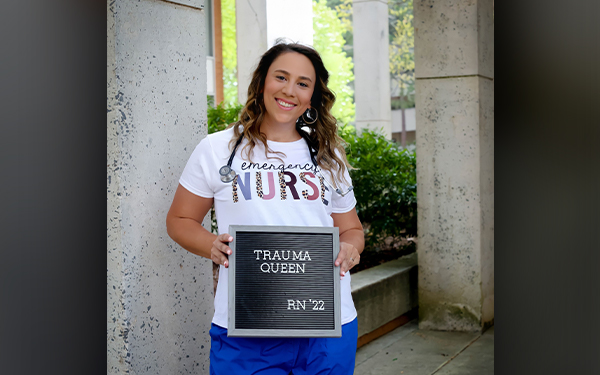 Lauren Klempel, of Austin, Arkansas, has dreamed of becoming a nurse ever since she was a little girl.

The mother of three is now getting the chance to work her dream career after graduating this month with an associate degree in nursing from the University of Arkansas at Little Rock.

“I believe my peers would agree that we are taking so much more from nursing school than a degree in nursing,” Klempel said. “Even through the struggles and tears, I will forever cherish the experiences I was blessed with.”

As a child, Klempel became such a natural caretaker that her family “referred to me as a little mom.”

“I was very independent in taking care of myself and taking care of others was very important to me,” she said. “I always knew I wanted to take care of people. I jumped from wanting to be a doctor, then a pediatrician, and then a nurse.”

After being diagnosed with asthma as a young child, Klempel learned just how important nurses can be in lifting the spirits of patients.

“I spent more time in hospitals than any child should. I didn’t spend a Christmas at home until I was 5,” Klempel said. “I remember those nurses who would make everything okay. As a kid, you don’t understand why you are in the hospital and why you can’t do all the things that other kids are doing. Those men and women treated me like I was a superstar. I’ve had those standout people who have made such a difference in my life. If I can be that for one person, it will make all the tears and the struggle to get here worth it in the end.”

After finishing high school at 17, Klempel moved out of her parents’ home and started college. But the cost of living on her own and going to college quickly added up, and Klempel decided to take time off from school to save money.

“Needless to say, here I am quite a few years later,” Klempel said. “I met my husband when I was 20, and the next thing we knew we got married and had a baby on the way, and he joined the Air Force. College became a dream, and I thought that’s all it would ever be.”

Since she got married in 2010, Klempel and her husband and three children have lived all around the country – Texas, Florida, and Virginia. In 2017, the family was supposed to move to South Korea. Just two weeks before her husband was deployed, word came that Klempel and her children couldn’t move to South Korea after all. The family instead moved to Austin, just north of Little Rock Air Force Base, where Zach Klempel was assigned when he returned to the United States.

As a military spouse, Klempel was an active volunteer and healthcare advocate for military families. After her son was diagnosed with Kawasaki disease at 18 months, Klempel volunteered extensively with the Kawasaki Disease Foundation.

“I was blessed with amazing opportunities to speak,” she said. “I actually sat on a board that spoke with President Trump about the challenges faced by military families. I’d thrown myself into that role. I am all about standing up for what I believe in. I think one voice can make a difference.”

Her efforts were recognized in the 2018 Military Spouse of the Year competition, where she was named one of the top three military spouses of the year for the U.S. Air Force.

In May 2020, Klempel joined UA Little Rock’s School of Nursing to finish her long-held goal of becoming a nurse.

“Throughout this process, I may or may not have had more mentor meetings than any of my peers, given my incredible self-doubt,” she said. “I have spent most of my life thinking that I was not good enough or that I would never be able to do anything that would allow me to stand on my own two feet. Here I am today a better person, all thanks to not only my family and friends that have supported this journey, but because of the amazing instructors and peers that have helped me along the way.”

After graduation, Klempel and her family will move back to Texas, where she will be working as a nurse in the emergency department in Medical City North Hills Hospital, just outside of Dallas.

“I’m blessed to have the opportunity to go into a field I love,” she said. “I’m excited to see what the future holds.”