The University of Arkansas at Little Rock will bestow two of its most prestigious awards on alumni. Little Rock Mayor Frank Scott Jr. is this year’s Distinguished Alumnus Award honoree, and Loris Fullerton of Little Rock is the Presidents Award recipient.

Both will be honored at the university’s annual Distinguished Alumni Luncheon on May 10 in the Clinton Presidential Center Great Hall.

A native of Little Rock, Scott has spent most most of his adult life in public service – as an associate pastor, as a mentor to young teenagers, and as a leader in public policy. In December 2018, he won Little Rock’s mayoral run-off, becoming the city’s first popularly elected black mayor.

As the first person in his family to graduate from college, Scott is an advocate for education. He earned an undergraduate degree in business administration from the University of Memphis and then earned a Master of Business Administration with a concentration in strategic management from UA Little Rock’s College of Business. He continues to serve his alma mater as a member of the UA Little Rock Board of Visitors, and he has previously served on the College of Business Advisory Council and the UA Little Rock Alumni Association Board of Directors.

“As I remember it, he reached out to me about getting more involved in the university nearly a dozen years ago,” O’Neal said. “After our first meeting, it was clear to me that he should join the Alumni Board of Directors because of his vision to improve Arkansans’ access to education.”

Since 2012, Scott has worked as an executive with First Security Bank, where he focused on new business development, commercial lending, and strategy.

Prior to banking, Scott worked five years for former Gov. Mike Beebe, first as deputy policy director and later as director of intergovernmental affairs. He advised Beebe on his legislative agenda and public policies such as budget, health care, human services, economic development, and workforce development. In 2013, Beebe appointed appointed Scott to fill an unexpired term on the Arkansas State Highway Commission. That term expired in January 2017.

Scott previously served on the Board of Trustees for Pulaski Technical College (now UA-PTC) and on the boards for Little Rock Port Authority and Big Brothers Big Sisters of Central Arkansas. Additionally, he is a member of Greater Second Baptist Church in Little Rock. 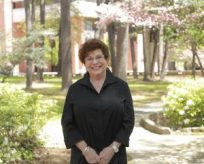 Fullerton, of Little Rock, is receives this year’s Presidents Award, which honors alumni who have had success in their careers, donated time and talents to their community, and remained in touch with their alma mater as a volunteer and resource person. The award has been given annually since 1987.

Over the past decade, Fullerton has helped raise more than $1 million for student scholarships during her nine years chairing Jazz and Juleps. The annual event, which debuted in 2010, has been held in May during Better Speech and Hearing Month and raises scholarships for graduate students in the school’s Department of Audiology and Speech Pathology, a joint program with the University of Arkansas for Medical Sciences.

“You’ll be hard-pressed to find another volunteer with as much energy, drive and devotion to UA Little Rock,” O’Neal said of Fullerton. “Her commitment and steadfast pursuit of excellence in raising money for scholarships that support future practitioners in audiology and speech pathology makes a measured impact on the community.”

Fullerton graduated from UA Little Rock in 1974 with bachelor’s degrees in psychology and sociology. She worked several years in the banking and investment industries before following her passion to be a travel agent. She currently works for Westrock Travel.

Working with the Development Council of the Audiology and Speech Pathology Department interested Fullerton whose niece, Sarah Kathleen Mayersohn, was born with hearing impairment. Sarah’s family moved to St. Louis so she could attend St. Joseph Institute for the Deaf, and she received cochlear implants, which weren’t available in Arkansas at the time.

“It made a tremendous difference for her,” Fullerton said of her niece, who has since graduated from Boston College and works as an archivist in Washington, D.C.

An endowed scholarship established in Fullerton’s name – the Loris Mayersohn Fullerton Endowed Scholarship – has been awarded since 2014.