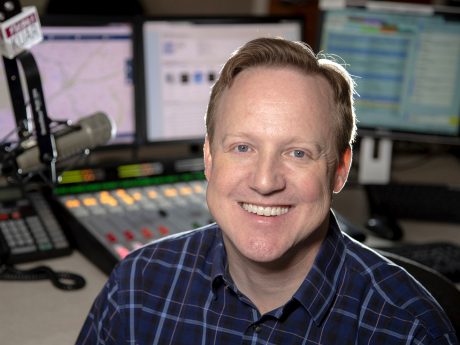 Our latest Alumni Spotlight features a UA Little Rock graduate who has a passion for radio and railroads.

Michael Hibblen grew up in North Little Rock and, after spending 13 years working as a reporter elsewhere in the country, he moved back to Arkansas in 2009. Today he lives in Little Rock and is the News Director at KUAR-FM 89.1, the National Public Radio station based at UA Little Rock.

Michael has been in some form of radio or journalism for 30 years, including six years in Florida reporting for print and radio at daily newspaper The Miami Herald, which had a partnership with NPR station WLRN. He also spent three years working as a Miami-based freelance reporter for CBS News Radio.

In 2013 Michael completed his Bachelor of Arts degree, which he started 23 years earlier and resumed in 2011. He majored in Mass Communication with a minor in Art.

What’s the most important thing you took away from your studies at UA Little Rock?
“How important it is to finish your degree. I regretted not completing my degree during my first period in college. I was working in my field of choice as a reporter, but it would have eventually impacted my ability to advance in my career. So after moving back to Arkansas, I was happy to finish the remaining classes I had left and complete my degree. I would encourage others to focus and finish their degrees while they’re still young. But if that’s not possible, do come back as I did and get it completed.”

What advice would you give to current students?
“Take advantage of internship opportunities to get your foot in the door and begin getting professional experience in the field you’re interested in. It will also help you look at what your desired profession is really like and decide if it truly is what you’d like to do professionally.”

Is there anything else you’d like to share about yourself?
“I’ve long had an interest in railroads and, two years ago, published a book called The Rock Island Railroad in Arkansas, which focuses on the history of the railroad that shutdown in 1980. I’ve also grown that into a podcast series featuring interviews with former employees of the railroad and have spoken about all of that to groups throughout the state, including at the Clinton Presidential Center, and during a half-hour program on AETN.”