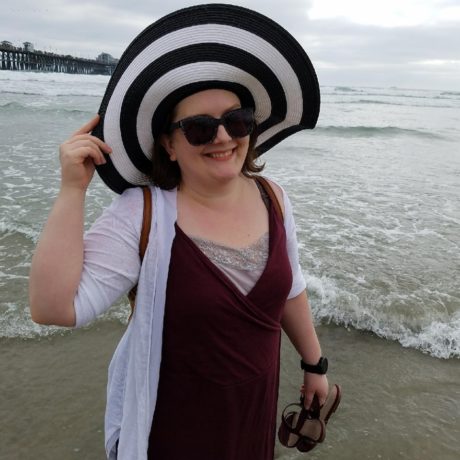 Amy Widner is a Conway native who earned her bachelor’s degree in Mass Communication/Journalism from the University of Central Arkansas in 2008. Amy, who now lives in Maumelle, is studying public relations at UA Little Rock.

In addition to working toward he master’s degree, Amy is a communications specialist at the University of Arkansas for Medical Sciences. She also teaches yoga and spends a lot of time riding her bike with her boyfriend, Cliff.

Why did you choose to seek a graduate degree in Mass Communication?
“I spent all of my undergraduate time and almost 10 years of my early career working in journalism, so when I switched jobs in 2016 to public relations/communications, I thought it was a good time to go back to school to brush up on my skills and also learn more about my new profession.”

What’s your favorite Mass Comm class so far and why?
“I liked Public Relations for 21st Century Nonprofits. It was the first class where I transitioned from theory into an application for what I had learned. We wrote a strategic communications plan for a local nonprofit, and it felt good to have something substantial like that to show at the end of what was — admittedly — a lot of effort. After spending so long in newspapers, I really love that feeling of having a final finished product that is based in theory, yet practical.”

What advice would you give to undergraduate students that you wish someone had given you?
“I think the biggest advice I would give undergraduates is to take it seriously and learn as much as you can. Every skill you learn could open a door for you professionally in the future. So take advantage of those opportunities to learn.”