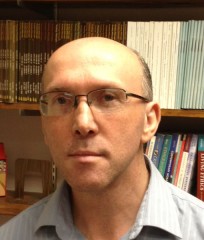 Dr. Robinson came to UALR in 2012 having spent seven years as a faculty member in the Department of Philosophy at the University of South Dakota. Before that, he worked for several years at universities in Michigan and in the UK and Europe. Originally from London, he completed his Ph.D. at the University of Warwick.

Dr. Robinson’s teaching and research have been concerned primarily with three main areas, the first being the European traditions of thought that emerge from Kant and post-Kantian philosophy – especially 19th and 20th century Continental thinkers (Nietzsche, Foucault, Deleuze). Secondly, he has strong interests in modern process philosophy (James, Bergson, Whitehead). Finally, he is interested in the interconnections between these two areas. This last area of research has revolved around a critical exchange between phenomenology and perspectives drawn from poststructuralist and process thinkers. It has centered principally on temporal themes, especially the concepts of ‘event’ and ‘process’, across a range of contexts and problems. Dr. Robinson has published one book (with a second in preparation), two edited book collections, two special journal issues, and some 20 published articles and chapters in books along with several invited conference presentations.

“The Event and the Occasion: Deleuze, Whitehead and Creativity” in The New Whitehead, eds. N. Gaskill & A. Nocek (Minneapolis: University of Minnesota Press, 2014).