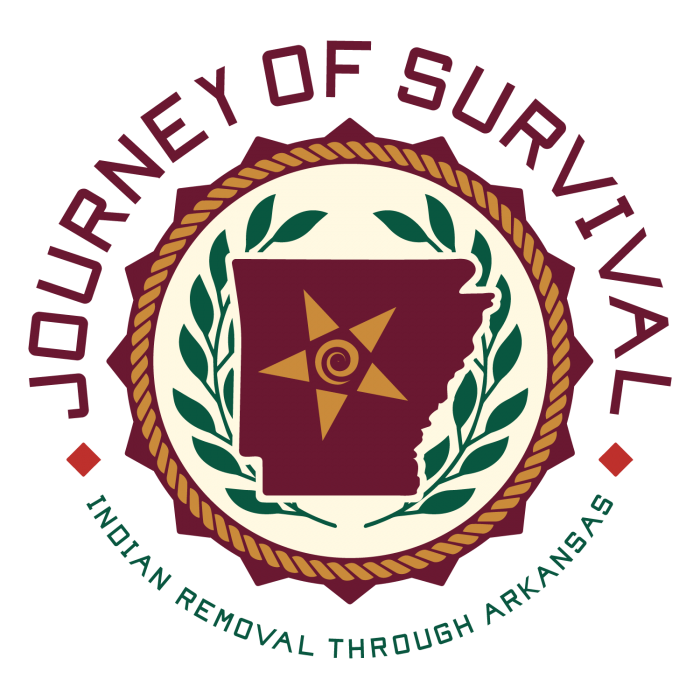 The Sequoyah National Research Center at the University of Arkansas at Little Rock is pleased to announce the completion of the Journey of Survival: Indian Removal Through Arkansas project. This research project was funded by a grant from the Arkansas Natural and Cultural Resources Council and includes completion of a touchscreen table and companion website.

Journey of Survival was a two-year project tasked with creating a visual representation of the Indian Removal Act of 1830 signed by President Andrew Jackson that forcibly displaced the Southeastern Tribes of the United States—Cherokee, Chickasaw, Choctaw, Muscogee (Creek), and Seminole. Each tribe was removed through the State of Arkansas from their ancestral homes in the Southeastern United States to their new homes in Indian Territory, now Oklahoma.

The Journey of Survival project maps each route taken by all five tribes and provides historically accurate narratives that document the routes traveled. Over 80 sites have been identified as significant to the story of Indian Removal through Arkansas that includes photographs of the current-day locations and historical markers created by the National Park Service and other entities. Digital images of original manuscripts found at the National Archives and Records Administration in Washington, D.C., have been included that will make great primary source tools for educators. The map was based off of the 2009 map created by the Arkansas Chapter of the Trail of Tears Association and updated with new research.

The project would not have been possible without the following people: Researchers Dr. Daniel F. Littlefield, Jr. and Graduate Assistant Alex Soulard, GIS Analyst James Holley, Programmer/Developer Erik Stevens, Graphic Design by Media & More, Technical Support Freta Rogers-Mason, and Principal Investigator Erin Fehr. Most of all, this project is possible with generous support by the Arkansas Natural and Cultural Resources Council.

The website—journeyofsurvival.org—is available now, and the touchscreen table located in the Center will be available for in-person interaction at a later date.