Senior biology major Azure Yarbrough is among the more than 1,500 students who are expected to participate in UALR’s Spring Commencement on Saturday, May 18, at the Jack Stephens Center. 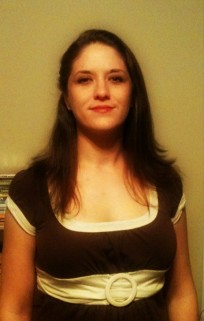 Yarbrough, 35, knows a thing or two about diligence. She is graduating after a 17-year gap since she first enrolled as a full-time college student.

There will be no such gap when she starts graduate school this fall, however. Yarbrough will focus her studies on cellular and molecular biology at the master’s level, leading to a Ph.D. in applied bioscience from UALR.

This summer, she hopes to work in the biology lab at UALR, trying to replicate a protein based recombinant gene known as RabK2.

“I prefer to never be bored,” she said, “and cellular and molecular biology lets me ask new questions. Plus, it’s really interesting to see the relationships between organisms. Who would have thought we humans had something in common with worms?”

Yarbrough attended college for two years directly after high school and originally dreamed of going to work for the U.S. Centers for Disease Control.

But her education was placed on hold following the birth of her daughter, who had a bleeding disorder. Five years later, her son was also born with the disorder, initially diagnosed with severe autism accompanied by violent outbursts. His final diagnosis was sensory integration dysfunction.

To support herself and her children, Yarbrough worked two and sometimes three jobs. But whether she was bartending, assisting at a veterinarian clinic, or helping disassemble vehicles at a garage, she never stopped dreaming of returning to school.

One Dream Realized, Another Ignited

Three years ago, her grandmother’s generous offer to pay for tuition enabled Yarbrough to stop thinking about, and instead, start living her dream.

Two weeks into her first molecular biology course, Yarbrough says she found something she could do forever.

“When I found that class, everything fell into place. That class compared to three jobs was nothing,” she said, laughing.

Along the way, Yarbrough, a Supplemental Instruction Leader at the Academic Success Center, also realized she had a knack for teaching.

“I’m not highly motivated by money,” she said. “I want to investigate what I want to study, and teaching allows you that freedom.”

Yarbrough said tutoring, with all its perks and drawbacks, is fine, but helping adults who want to learn is really a lot of fun.

“I’ve had a lot of students say I was really good at it, plus I love being at school,” she said.

Yarbrough was so determined to finish her undergraduate degree that even a prolonged hospital stay last year due to an abscessed mass and kidney failure did not deter her.

When asked what kept her going through the years, she answered, “my kids.”

She said her children, now 15 and 10, will no doubt cheer her on as she leads her college as a student marshal during the processional at commencement, an honor bestowed on outstanding students.

“I want them to know that no matter how hard it is, you can still achieve your goal,” Yarbrough said. “Life is full of difficulties and challenges, but you have to know how to overcome them.”