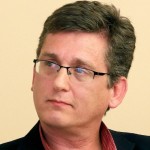 James Ross has a Ph.D. from Auburn University and is a specialist in the interaction of race, class, and religion in 20th century United States history. He also spends much of his time investigating Arkansas history. He is a former high school teacher and serves as assistant coordinator of the secondary social studies education program.

As part of his work with social studies teachers, both pre-professional and professional, he serves as lead historian for the Teaching American History grant project in conjunction with the Little Rock School District.

His current research and writing projects include an examination of Bill Valentine’s role in Major League Baseball’s unionization movement, the role of Southern Baptist pastor W. O. Vaught in the 1957 Central High Crisis, and the development of Little Rock in the 1960s.