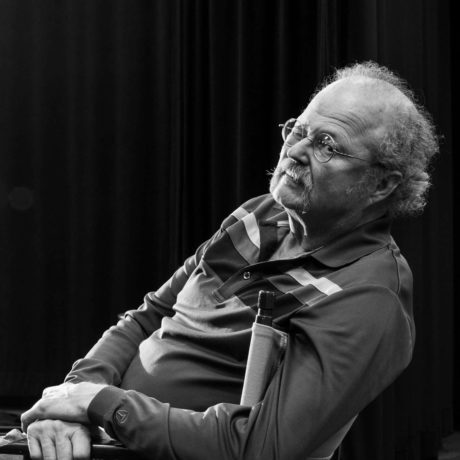 The faculty and students of the School of Mass Communication will say goodbye to a longtime colleague and mentor next month.

Senior Instructor David C. Weekley will be retiring at the end of the fall semester. Weekly, who earned a bachelor’s degree from the University of Houston, joined the school in August 1998 as an instructor, cable coordinator and production supervisor.

Before that, Weekley worked in video production and taught part-time at a private school in Australia.

“My professional career in video production was taking me out of town a lot, and I wanted to spend more time with my kids,” he said. “I approached the university at the right time. They needed to get somebody in quickly as the professor before me resigned just before school was starting.”

His work also has generated about $250,000 for the School of Mass Communication, said the school’s interim director, Dr. Timothy Edwards.

“David’s work over the years with non-profits and other organizations throughout Central Arkansas and the state has given our students many opportunities not only to give back through service learning but to develop contacts and professional skills that helped many of them get jobs,” Edwards said. “Many of the students who went through our media production program and are working at various news outlets and production companies here, as well as across the country, were taught by David.”

Weekley has taught advanced production courses, such as non-linear video editing, script-to-screen, and the electronic media capstone. He also has worked for the past 13 seasons with Trojan Athletics to produce Trojan basketball. In the process, he helped train students to operate cameras and handle other needed tasks for those in-house productions.

“My favorite thing about teaching in the School of Mass Communication was that I got to design the courses the way I felt would give students more practical experience,” he said. “I was able to do outside work and bring money to the department and bring students along for real time experience.”

Dr. Jamie Byrne-McCollum, a professor and former director of the School of Mass Communication during its early days, has worked with Weekley for her entire 18-year UA Little Rock career. Working with him has been “an honor and privilege,” she said.

“David was one of the faculty members, along with Dr. Edwards and Sonny Rhodes, who was here when I first came,” Byrne-McCollum said. “Those individuals were so important to the launch of the School — I’ll always be grateful to them for their work, support and friendship.  We’re family.”

Weekley is the type of professor who always goes above and beyond for his students, she said.

“He’s always been most generous with sharing his time and considerable talents and experience with them. I think they know that, which accounts for the fact that so many of them stay in contact with him long after they have graduated.”

Justin Roberts, who took classes with Weekley during his undergraduate studies at UA Little Rock, agreed with Byrne-McCollum.

“Beyond the technical skills I acquired from Prof. Weekley’s tutelage, he’s someone who believes in students and wants them to succeed,” said Roberts, who is now a marketing specialist at ATG USA. “He helped me get my first internship during my senior year — at a time when I could have been a better student. But he believed in me. I wouldn’t be where I am today without him.”

Current student Madison Kilby said in a recent interview that she would be sad to see Weekley go.

“David Weekley is a great teacher, and it’ll be bittersweet seeing him retire after this semester.”

Even though he’s leaving the university, Weekley doesn’t plan to stop working entirely.

“In retirement I plan on converting one of my screenplays into a novel, finish writing a screenplay and work on a couple of documentaries,” he said. In addition, “My wife and I plan on going to Australia for a few months and visit our friends there.”

Before he departs, members of the UA Little Rock community will have the opportunity to say goodbye during a retirement celebration at 5:30 p.m. on Dec. 3 at UA Little Rock Downtown.

Edwards and Byrne-McCollum both said Weekley is a good friend in addition to being a great colleague, so saying goodbye won’t be easy.

“[Weekley] will be missed by faculty, staff and students alike. We wish him all the best in his new endeavors,” Edwards said.

“It’s wonderful to see him enter this new chapter in his life, but I’ll certainly miss working with him and seeing him on a regular basis. I wish David, Bonnie and their family much health and happiness on this new adventure,” Byrne McCollum said.

“I am very thankful for all the friendships I’ve made with faculty, staff and students,” he said. “I look forward to being a part of their lives in the future.”

More information on the retirement celebration for Weekley, including RSVP information, is available on our Events Calendar.