Dr. Yupo Chan of the systems engineering department has received $24,900 from NASA to measure the earth’s atmosphere to monitor its health and future climate.  Chan is working with Dr. Edmond Wilson of Harding University and Dr. Po-Hao Adam Huang of the University of Arkansas, Fayetteville.

Using a solar and atmospheric measuring satellite called SAMSAT, a 6U CubeSat that will be launched by NASA, the research team will map and monitor water vapor, methane, carbon dioxide, hydroxyl radicals, oxygen, ozone, and oxides in the earth’s atmosphere. SAMSAT is a low-cost, miniature satellite used for space research.

The goal of this project is to establish a set of baseline data in the state of Arkansas that will show the present state of the earth’s atmosphere and predict future trends. The information is of great value to Arkansas and beyond. The data collected by the research team will be compared to more conventional forms of satellite data collection such as the NASA/NOAA Geostationary Operational  Environmental Satellite. The validation of this new and inexpensive data-collection method will show the accuracy and uniqueness of SAMSAT.

This is the second year that the research team has received funding for this project. This NASA grant is funded through the Arkansas Experimental Program to Stimulate Competitive Research, a program that provides seed funding for aerospace research in the state of Arkansas. 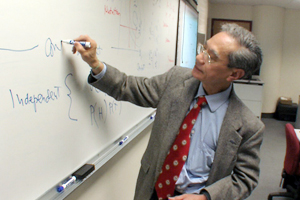