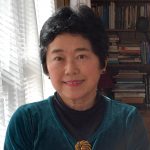 Dr. Kinko Ito received her M.A. and Ph.D. in Sociology from the Ohio State University. She is nationally and internationally known for her research on Japanese popular culture (especially manga comics) and the Ainu, the indigenous people of Japan. A Sociology of Japanese Ladies’ Comics: Images of the Life, Loves, and Sexual Fantasies of Adult Japanese Women, her harbinger work on women’s comics, the first kind in the world, was published by Edwin Mellen Press in 2011.

Dr. Ito visited Hokkaido in 2011, 2012, 2014, and 2018 and made two documentary films about the Ainu.  Have You Heard About the Ainu? Elders of Japan’s Indigenous People Speak took part in Film Festivals all over the globe. It is now available for viewing on YouTube.  The film features in-depth interviews of several Ainu elderly men and women. It also has an original soundtrack based on Ainu music by Professor Robert Boury. Her second documentary is Have You Heard about the Ainu? Part 2. Toward Better Understanding and World Peace (31 minutes) also available on YouTube.

Dr. Ito has been to more than 82 countries, and she loves to travel. Gourmet Food, Scrub, and Happiness in Body and Seoul: A Short Visit to South Korea and Pantyless in Scandinavia and Other Escapades of World Travel, her travelogues with sociological twists are available at Amazon.com. She loves cooking and enjoys karaoke in her spare time.