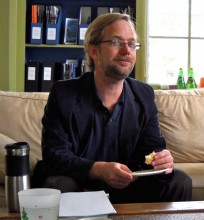 Dating back to his honors program in anthropology at Swarthmore College, Dr. Simon Hawkins has been dedicated to education and the liberal arts. In 1988, his interests in other cultures led him to Tunisia as a Peace Corps volunteer, an experience that eventually became the center of his professional research. Upon returning from the Peace Corps he pursued an MA in secondary education at the George Washington University and briefly taught high school social studies before joining the National Center for Improving Science Education where he conducted research on national and international education.

His anthropological research in Tunisia has tackled a range of topics, including: national identity, schooling and language learning, relations with Europe, gender and modernity, and state construction of religion. He is an award winning teacher with particular skills in social theory and qualitative research methods. In addition to his academic work, he is a graduate of Ringling Brothers, Barnum and Bailey Clown College. 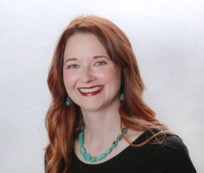 Prior to completing her Ph.D. in environmental dynamics from the University of Arkansas, Dr. Jessica Scott worked for the Walt Disney Company and Neiman Marcus, gaining an appreciation for their high level of service and attention to detail. After returning to graduate school, she had the opportunity to teach in the Fulbright Honors College, an experience that revealed her passion for teaching and mentoring students. Since starting with the Donaghey Scholars Honors Program, Dr. Scott has been able to use these experiences to create a challenging and supportive environment for students. In addition to her work as associate director, she also teaches the Science and Society core courses for the program, as well as variety of classes for the Department of Anthropology.

While her academic interests are varied, nearly all revolve around dietary ecology and the reconstruction of ancient climate. Her primary research uses tooth wear to reconstruct the diets and habitats of early human ancestors, but she has also studied the teeth of ancient Egyptians from the cemeteries at Amarna, Egypt. She has analyzed the teeth of dozens of fossil and living animals, including antelope, aardvarks, lions, hyenas, sabre-toothed cats, lemurs, monkeys, and apes.

Her work led her to conduct field research in Kenya, Madagascar, Ethiopia, Egypt, and The Great Divide Basin in Wyoming, as well as curatorial research with museums in London, Paris, Johannesburg, Nairobi, Addis Ababa, Brussels, Chicago, New York, and Washington D.C. She has published articles in The American Journal of Physical Anthropology, Mammalia, The Journal of Vertebrate Paleontology, The Journal of Human Evolution, The American Journal of Primatology, PLOS ONE, and Acta Palaeontologica Polonica, as well as a chapter in the edited volume, Technique and Application in Dental Anthropology.

Dr. Scott lives in Little Rock with her husband and her 8 year old daughter. In her spare time, she enjoys traveling as often as possible, is deeply engaged in the Little Rock community, and serves as a member of the Arkansas Zoological Foundation Board. 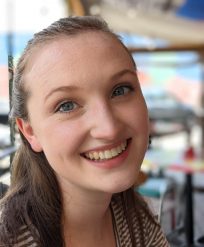 Ian is deeply passionate about the intersection of psychology and disability. After completing her BA, Ian worked as a Qualified Behavioral Health Provider at Youth Home in Little Rock, working closely with teens facing behavioral health challenges. After that, Ian served as a recreation aide and interim teacher at EasterSeals Arkansas, where she had the opportunity to know some amazing children and teens. While at EasterSeals, Ian implemented programs and lessons designed to nurture academic growth, reach therapeutic goals, and foster independence among residents with special needs and developmental disabilities.

Alongside supporting the faculty and staff of the Donaghey Scholars Honors Program, Ian is pursuing UALR’s Master in Arts in Counseling with an emphasis in Rehabilitation Counseling.

In addition to playing with and teaching kiddos, Ian enjoys spending her time working on jigsaw puzzles, going to Zumba classes, designing her island on Animal Crossing, and taking naps that are entirely too long. She is, coincidentally, married to a Donaghey Scholars alumnus! 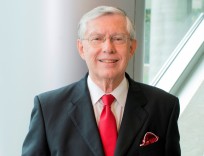 Dr. Earl Ramsey earned his B.A. in History and M.A. in English from Rice University and his Ph.D. in English from the University of Florida. He began teaching as a graduate student at community colleges in Texas and in Florida, but his full-time career began at Yale, then at Bryn Mawr, one of the historic Seven Sisters women’s colleges on the east coast.

Now retired following 25 years as director of UA Little Rock’s top honors program, Dr. Ramsey has made a lasting mark on its development by stressing an interdisciplinary approach. A literary critic and theorist, Ramsey has taught a wide variety of courses throughout his career – from 18th century literature to the writings of Michel de Montaigne, William Shakespeare, William Faulkner and Virginia Wolfe. He also taught History of Ideas in the Donaghey curriculum.

He joined UA Little Rock in 1973 as an associate professor and earned full professor status in 1977. The Student Government Association named him Faculty Member of the Year in 1999, and he received the College of Arts, Humanities and Social Sciences’ Faculty Excellence Award for Teaching in 2005.