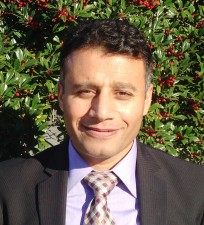 Since I was a little boy, I have always been fascinated by science in general and the nature of matter in particular, from the tiny atoms all the way up to the giant galaxies. Pursuing my love for physics, I entered the College of Science at the University of Duhok in Iraq in 1997. I graduated with my bachelor’s degree in physics in 2001, ranking first among that year’s graduates from the College of Science. Two years later, I started my master’s program in atomic physics at the same university.

After receiving my master’s degree in 2005, I was granted a faculty position by the department of physics at the University of Duhok, where I taught undergraduate classical mechanics for two academic years. However, though I enjoyed teaching, I still dreamed of being involved in high-standard applied research that I could develop and test in real life. Research with a global impact that would allow me to publish in reputable journals. That was when my goal of coming to the United States began. In the fall of 2008, after receiving a scholarship from the Iraqi government, I started my Ph.D. program at UALR in the applied science department. I conducted my research at the Center for Integrative Nanotechnology Sciences as a member of Dr. Alexandru Biris’s group.

As a result of hard work and Dr. Biris’s guidance, I started publishing in distinguished journals for our work in developing anti-wetting and anti-icing surfaces that utilize nanotechnology, a project funded by the US army. During my doctoral career, I published seven peer-reviewed papers and attended multiple international conferences. I have never been so excited in my life as when I was exposed to this high-level research with a global impact. I am indebted to Dr. Biris for his support and for introducing me to these opportunities in our field.

Currently, I live in Little Rock with my wife, who is pursuing her Ph.D. at UALR in the applied science department. While here, I am still engaging in independent research in nanotechnology with Dr. Tansel Karabacak’s group. I and two other colleagues from the University of Duhok have also submitted a proposal to that university to build a nanotechnology center; it is currently in the initial stages of consideration.

Finally, I must say that all I have achieved wouldn’t be possible without my parents’ encouragement, sacrifice, and perseverance through very difficult times. Additionally, I am thankful for the support of my wife Zubayda, colleagues like Dr. Haydar Al-Shukri and Dr. Hanan Al-Mahdi, and friends, as well as the inspiration my two cute sons, Varie & Shad, bring me.