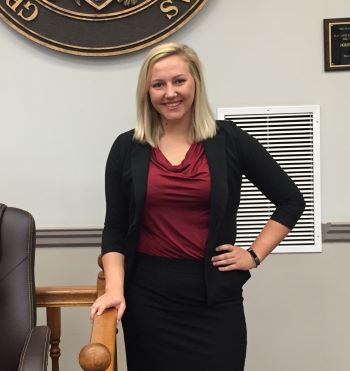 The University of Arkansas at Little Rock William H. Bowen School of Law has named Samantha “Sami” Kassen as the 2019-20 Dean’s Fellow of the Year.

As a dean’s fellow, Kassen was an integral part of the Bowen Student Success Program (BSSP).

Kassen is from Albers, Illinois, which is in the southern part of the state. She chose Bowen because of the impression the law school made when she came to visit. In addition to the welcoming atmosphere, the Student Success Program was very appealing.

“I was going to be by myself in a new city. It was comforting to know I would have 12 peers and an upper-level student who I would know regardless,” Kassen said. “I frequently bragged on the program, even before I arrived.”

As a second-year student, Kassen decided to complete her dean’s fellow application at the last minute. Though it was a little outside her comfort zone on the law school level, she had participated in a similar mentoring program as an undergraduate.

“I had a good experience with my dean’s fellow at Bowen,” she said. “Ultimately, I wanted to pay that forward.”

Kassen was chosen based on her demonstrated leadership skills, excellence in academic performance, professionalism, and a desire to lead and care for her fellow students.

Dean’s fellows’ duties are in addition to their own class responsibilities as upper-level students.

In the summer of 2019, Kassen made herself available to every student in her assigned Student Success Teams (SSTs). Each team has 5-6 first-year students, and she was assigned two teams. Her communications with these students included everything from a simple welcome, to answering questions about Bowen and their classes, to making referrals to other appropriate offices.

“Sami’s attitude was always warm and welcoming,” said first-year student Elijah Cummins, “She ensured that each one of us knew we could communicate anything with her.”

During First Week Orientation, Kassen held her first SST sessions to help students get off on the right foot in law school. She also helped lead the first-year community service project and assisted the Office of Student Affairs with various logistics of orientation.

Throughout the fall semester, Kassen spent one or two hours each week preparing and planning lessons for her group. While not providing substantive legal instruction, she worked to improve her group members’ skills in the approved BSSP curriculum, including case briefing, study skills, test-taking strategies, and stress management. Her plans included quizzes, reviews of upcoming classes, or a review of what they’d learned the week before.

“Sami was prepared, excited, and nurturing to each student in her teams,” said Cummins. “I’m very honored to have been guided by her, and I can only hope to be half the dean’s fellow she is.”

Kassen’s groups met for 90 minutes each week. Throughout the semester, members also sent her outlines, hypothetical responses, and case briefs for her review to make sure they were on the right track. That required an additional two or three hours of her attention each week.

She also provided general mentorship and guidance to her group members.

“Sami was the best because she somehow made us all come together as friends and treated us like peers,” said first-year student Kerrigan Cook. “She was always willing to answer our numerous questions and advocate for our needs. She helped make 1L year a little more bearable and a little less overwhelming.”

In addition to SST meetings, Kassen promoted her group members’ participation in skills workshops, academic advising, writing assistance, wellness and fitness events, career services events, and public service activities. She also encouraged them to get involved with Bowen’s student organizations. This participation helped ensure that her students were proficient in the classroom and were healthy and well-rounded students who embody Bowen’s core values of professionalism, public service, and a dedication to access to justice.

“I enjoyed getting to know the incoming students and being a part of the 1L experience as a dean’s fellow,” she said. “The first semester of law school can be overwhelming for many different reasons, so being the person that students could go to for advice and clarity was something I was glad to do. Bowen’s Student Success Program has given me such a beneficial experience and connection to Bowen. I really couldn’t imagine going through law school without it.”