Dr. Mariya Khodakovskaya collaborates with researchers across the country to test the effects of nanomaterials in crops 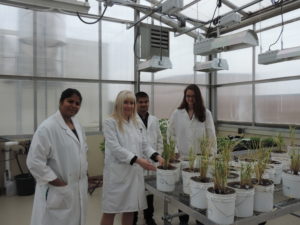 Technology is transforming the agricultural industry and allowing new ways to grow and harvest critical food sources. One advancement is the use of carbon-based nanomaterials, very tiny carbon materials (approximately 1-100 nanometers) that can be sprayed or added on to soil to regulate plant growth. These nanomaterials, such as nanotubes, graphene, fullerene, and nanohorns, are used to stimulate growth in multiple plant species, including food and non-food plants.

While scientists usually apply nanomaterials to research applications, they are now assessing their use to grow crops and plants. However, current research does not show if carbon-based nanomaterials pose any risk to plants.

Mariya Khodakovskaya, biology professor and interim associate dean in the College of Arts, Letters, and Sciences has received $464,000 from the USDA to assess the environmental risks of using carbon nanomaterials to stimulate and regulate plant growth. Khodakovskaya is working with Alexei Basnakian, professor of pharmacology and toxicology at UAMS, and Micah Green, professor of chemical engineering at Texas A&M University, to examine if using nanomaterials in agriculture poses any health risks.

To conduct this study, the project team will identify the exact amount of carbon nanotubes that can be accumulated in different plant organs, study how absorbed nanotubes can affect plant metabolism, and identify whether plant organs contaminated with nanotubes can be toxic when eaten. Overall, Khodakovskaya predicts that this risk is low.

“Our preliminary data indicate that [carbon-based nanomaterials] accumulate in very low amounts inside exposed plants,” Khodakovskaya said. “We predict then, that the toxicity will be really low. This is our prediction, but it’s also our hope.”

Khodakovskaya believes that collaborating with Drs. Green and Basnakian is essential to the success of this project. By combining different disciplines, the project team can create a detailed picture that shows the advantages and disadvantages of introducing these nanomaterials into the agriculture industry. She also wants to collaborate with the community to inform the general public about the possible risks.

“I believe this is a very good interdisciplinary approach—that members of our team belong to different areas of science,” Khodakovskaya said. “Hopefully, the generated data will be very important for the research community, federal and environmental agencies, as well as the general populace.”

Khodakovskaya has been a faculty member at UA Little Rock since 2008. After receiving her Master of Science in Biology at Far Eastern National University, she received her Ph.D. at the Far Eastern Branch of the Russian Academy of Sciences. Throughout her education, she became interested in studying the internal chemical processes of a plant’s life cycle, such as stress

signaling and plant metabolism. Khodakovskaya’s tenure at UA Little Rock has allowed her to collaborate with multiple disciplines on campus. Because her field requires mixing biology with other disciplines, such as chemical and materials engineering, she values her relationships with other faculty members to augment her research.

In January 2018, she was named interim associate dean for research and graduate students in the College of Arts, Letters, and Sciences. She is optimistic that this new role will allow her to encourage different departments and disciplines on campus to collaborate. In 2019, Khodakovskaya was awarded the Faculty Excellence and Creative Endeavors Award.

“My research experience is helping me to serve with the college in a way that will promote and encourage research…hopefully my example will serve as a good example for interdisciplinary studies here and more intense collaborations.”

This work is supported by the USDA National Institute of Food and Agriculture, AFRI project 2018-67021-27921