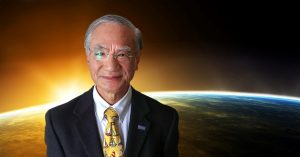 For several years, researchers have focused on the prevalence of greenhouse gases in the Earth’s atmosphere.

Dr. Yupo Chan from the Department of Systems Engineering, along with Dr. Edmond Wilson of Harding University and Dr. Po-Hao Huang at the University of Arkansas, Fayetteville, is leading the effort to develop a small, cost-effective way to observe atmospheric levels of greenhouse gases, including in the state of Arkansas.

The research team is developing the SAMSAT measuring satellite, a 6U CubeSat that will be launched into orbit by NASA to gather atmospheric levels of greenhouse gases. SAMSAT stands for “solar and atmospheric measuring satellite.” The “6U” part of the title means that it is six times larger than a 1U satellite, which was a cube sized at 10 centimeters, similar to the size of a peanut butter jar. CubeSats have been used by NASA and many other organizations for various research purposes in space, but this research team is designing its own unique functions for the satellite to improve its mobility and data collection mechanisms. Chan, Wilson, and Huang are part of the Arkansas Experimental Program to Stimulate Competitive Research (EPSCOR), a NASA program designed to provide seed funding for aerospace research in Arkansas. UA Little Rock is the lead institution in this EPSCOR project.

At Harding University, Wilson is responsible for measuring the gases in the atmosphere using spectrometry, a technique that shows how gases absorb light. At UA Little Rock, Chan is responsible for downloading the signals from both the NOAA/NASA GOES satellite and the SAMSAT and analyzing their data. The GOES signals are downloaded to a satellite dish
housed on top of the ETAS building on the UA Little Rock campus. By comparing the observations from the spectrometer with the processed data from GOES, the research team can validate the functionality of the nanosatellite constellation. If the constellation can monitor greenhouse gases similar to its much more expensive counterpart, the research project is deemed fully successful.

“We want to show the world that we’re not just saying we can do it, [but] we can validate it against the gold standard.”

The NOAA/NASA GOES is a network of stationary satellites that monitors weather, land, environmental, and climate conditions. The National Weather Service uses this network of satellites to forecast the weather. The SAMSAT will not monitor weather conditions, only greenhouse gases. While the NOAA/NASA GOES is considered the gold standard of monitoring environmental conditions, the SAMSAT is cheaper, leaner, and more flexible in its viewing directions.

“Working with Dr. Chan is a great experience. He is an expert in computer imaging and theory. He is very organized and goal oriented and I have the greatest respect for his leadership in this exciting mission,” Wilson said.

Due to the size of the NOAA/NASA GOES satellite, it can only see the earth in a top-down point of view. The SAMSAT, however, can view the earth at many different angles and viewpoints.

“The first step is to show the world that we are reading the same thing as the big, expensive satellite

at a much lower cost with much more flexibility,” Chan said. “We want to show the world that we’re not just saying we can do it, [but] we can validate it against the gold standard.”

According to NASA, the NOAA/NASA GOES satellite project began in 1975, but its roots go back to 1966 when the Applications Technology Satellite (ATS) series was launched on December 7 of that year. In 1967, the ATS-3 snapped the first color photo of the entire Earth.

The research team is now in the second year of the project. As they move forward, they plan to boost their research capabilities to gather more detailed data of the atmospheric conditions in Arkansas. By creating more cost-effective and flexible ways to monitor the state’s atmosphere, leaders and scientists in the state can continue to develop new ways to make our communities healthy and vital.