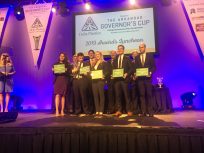 A dream team of student entrepreneurs from the University of Arkansas at Little Rock has won two of the top honors at the Arkansas Governor’s Cup Collegiate Business Plan Competition, a statewide business plan competition for college and graduate students sponsored by Arkansas Capital Corporation.

The Vascugenix team won first place in the Winrock Automotive Undergraduate Division and a $25,000 prize. The team also captured first place and a prize of $5,000 in the undergraduate Innovate Arkansas Innovation Division for a total of $30,000 in prize money.

“I am very proud of the team,” Trigeaud said. “The Arkansas Governor’s Cup is an amazing event with amazing judges, and we are very proud to be the winners of the 2019 undergraduate division and innovation division competitions.”

In addition to the Arkansas Governor’s Cup awards, the team was named a semifinalist in the Rice Business Plan Competition Aug. 4-6 and plans to launch its medical startup company after raising a significant amount in funding from investors. MBA student Gabriella De Lima also joined Vascugenix for the Rice competition.

When Trigeaud first suggested the students enter the prestigious Rice Business Plan Competition, Asher thought it was a waste of time.

“This is the largest and richest student startup venture competition in the world,” Asher said. “Only 42 teams from 400 applications from the top universities are chosen. It would take an act of God for an undergraduate team to get selected.”

“The hard work in Martial Trigeaud’s business boot camps paid off, and we made it,” Resendiz added.

As one of 15 teams to make it to the semifinalist round, the students took home a $2,000 prize. One of the allures of competing in the Rice Business Plan Competition is the ability to pitch and network with hundreds of judges consisting of investors, venture capitalists, CEOs, entrepreneurs, and corporations who are looking to invest in the next big idea.

“You’re sitting in a room with a sea of millionaires who are looking to invest in your company,” Cochran said. “That is just from people who came up to us at the competition and saw our pitch. We have a significant amount of people who are interested in investing in our company.”

Asher believes their company is appealing to investors because they already have a mature business plan with a viable product that can be launched relatively quickly.

“One of the reasons I think we did so well raising money is that we are a mature startup company,” he said. “We have a very simple but needed product that fits in a niche market that we can dominate. It can give investors a quick return on their investment.”

The students say the experience they have gained pitching in front of investors is invaluable.

“I can now say that I’ve successfully pitched in front of ventures capitalists, and that is a cool thing to say in front of potential employers,” Resendiz said. “Competing at the same level of master’s and Ph.D. students and people who have 15 plus years of experience in their fields and still being able to surpass them is an excellent feeling.”

After an eventful week of competitions, Team Vascugenix isn’t resting on its laurels. The students left the Arkansas Governor’s Cup and immediately headed to the airport to compete in the Schulze School of Entrepreneurship at the University of St. Thomas in Minnesota April 11-13. Funded by the Richard M. Schulze Family Foundation, the challenge is the largest undergraduate-only venture pitch competition in North America in terms of cash prizes with a top prize of $75,000 and $250,000 in total prizes awarded.

“We wouldn’t have made it into this competition without the help of the university’s photographer, Ben Krain, who shot a seven-minute video we needed to enter this competition,” Resendiz said.

UA Little Rock’s team is one of 25 finalists selected from more than 100 entries representing 61 colleges and universities across America. Students will participate in a “pitch slam” elevator pitch event and an innovation challenge. Teams also will be awarded for outstanding potential to have social and global impact. Student teams also will be networking with top entrepreneurs from around the country, including Richard M. Schulze, founder of Best Buy.

The students would like to thank Trigeaud; Dr. Jane Wayland, Stephen Harrow Smith Dean of Business; Laura Fine, director of the Arkansas Small Business and Technology Development Center; and Dr. Mark Funk, chair of the Department of Economics and Finance, for their assistance in developing their startup company and participating in competitions.

Once the competition season is over, Vascugenix will move forward with plans to develop the Speed-Torque™ for a commercial release.

“We’ll look for the investors who fit the best with our company culture and vision for the future,” said Asher. “We want investors with the right networks of contacts who can help us succeed.”

They are also in talks with health technology accelerators to conduct pre-market clinical trials through Baptist Health and possibly the University of Arkansas for Medical Sciences.

“After our clinical trial, we will be ready to begin selling in the market. We will target the South and Midwest based out of Little Rock,” Asher said.