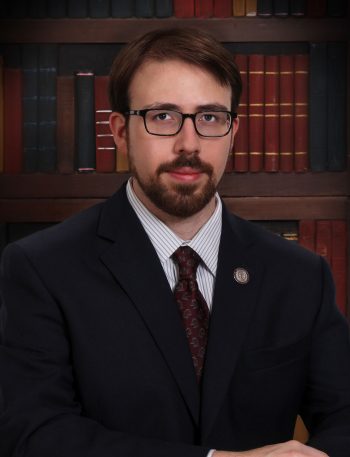 After joining the library staff in 2019 while working toward his Juris Doctorate at Bowen School of Law, Harry Lah became Acquisitions & Serials Librarian / Assistant Professor of Law Librarianship in January, 2022. Prior to entering law school, Professor Lah gained extensive experience in librarianship and archiving during his employment with the Arkansas State Library, the Arkansas State Archives, and the Riley-Hickingbotham Library at Ouachita Baptist University. He takes pride in embracing new technology and developing new techniques and approaches in an ever-changing library service environment, and enjoys assisting with research and patron/student service needs.

An innovative and visible presence in his area of study, Professor Lah has played an active and contributing role in various special projects and assignments. These include the reestablishment and rededication of the archiving and organization of the papers of the late Senator John L. McClellan at Ouachita Baptist University, as well as serving as a panelist at the 2018 conference of the American Society of Archivists in Washington, D.C., highlighting his work on the digitization and historical preservation of the Rohwer Japanese Internment Camp in McGehee, Arkansas.

Having devoted his adult life to education and research, Professor Lah is firmly committed to the William H. Bowen School of Law Mission Statement of “equipping students with knowledge, skills, and values; as well as assisting in solving challenging social and legal problems through scholarship and public service.” He is a member of the American Association of Law Libraries, the American Library Association, the Arkansas Library Association, the Society of American Archivists, and the Arkansas Historical Association. He is also an avid reader, and a collector of books and vinyl records.

Panelist/Presenter, Rohwer Reconstructed: A Collaborative Digital History. Presented at the Joint Annual Meeting of the Council of State Archives, National Association of Government Archives and Records Administrators, and the Society of American Archivists, Washington, D.C., (August, 2018).

Recognized by Preserve Arkansas for his contribution to Rohwer Reconstructed: A Collaborative Digital History, (2019).