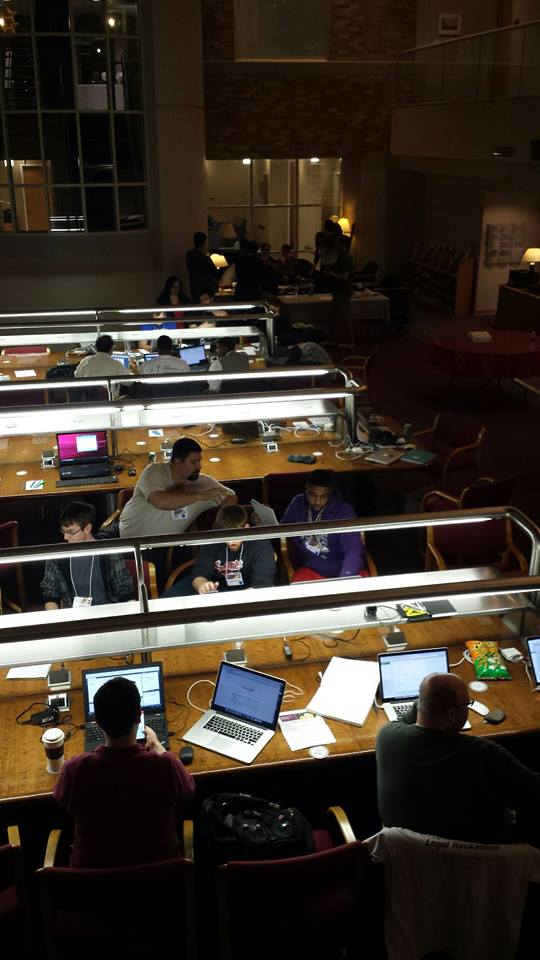 On February 5 and 6, the William H. Bowen School of Law hosted the first legal-themed hackathon in Arkansas and in the southern United States.

It was hosted in conjunction with the Altheimer Symposium hosted by the UALR Law Review. The symposium’s theme this year was “Legal Hacking: Technology and Innovation in the Legal Profession.” Over 200 attendees from across the state spent February 5 in educational events at the law school.

At 6 p.m. on Friday, February 5, more than 25 hackers gathered in the library, formed eight separate teams, and began working on their projects. Attendees included local lawyers, software developers, law students, and technology students from three central Arkansas universities (UCA, UALR, and Hendrix) as well as students from The Iron Yard, which was one of the hackathon sponsors. One hacker traveled from Seattle.

If you’ve never been to a hackathon, there are two basic rules. First, hackers cannot write one word of code before the start time of the event. Second, in order to fare well in the judging component, they have to be mostly finished with their software applications at the end of the hackathon.

The eight teams in the Bowen hackathon were tasked with creating a legal application to assist the legal community – either lawyer0 or self-represented litigants.  Bowen remained open overnight on Friday night so the teams could work without interruption. The deadline was 11 a.m. Saturday morning, when testing and judging began.

The judges for the event were: Dan Lewis, the founder of Ravel; Toby Unwin, the founder of Premonition; Dan Lear, the Director of Industry Relations for Avvo; two law school experts in technology and the law – Janette Eicks of Vermont Law School, and Angela Upchurch of Southern Illinois University Law School; and two representatives from UALR’s Donaghey College of Engineering and Information Technology – Dean Lawrence Whitman and Professor Thomas Wallace.

“Bowen has a deep commitment to access to justice and to teaching our students the skills, even technological skills, modern lawyers need to be successful,” said Dean Michael Hunter Schwartz. “Access to justice can be aided by technology. Underserved populations can be given easy-to-understand tools to help themselves, or lawyers can develop and use applications to make legal services more cost effective. Law school graduates need to be comfortable in the technological space.”

#BOWENHACK: DAY 1 from Hark on Vimeo.