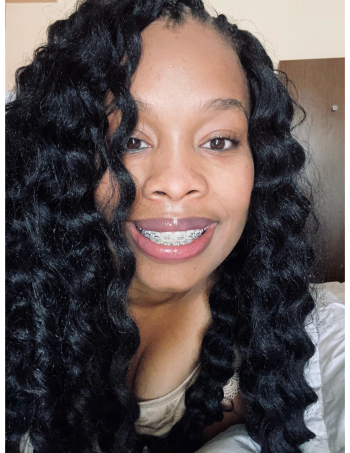 “I had applied previously, and I am extremely happy to be this year’s award recipient,” Shyteria said.

Shyteria is from Memphis, Tennessee. Prior to law school, she was an English teacher and has taught at the elementary, middle school, and high school levels. Her plan was always to teach for a time and then go to law school.

“I have always wanted to be a lawyer. God places in us certain passions, gifts, and purposes. I know that part of my purpose is to fight injustice, to be a voice for the voiceless, and to leave an incredible footprint in the legal arena,” she said.

Shyteria came to a Bowen open house with a friend after doing her research on the school and remembers leaving feeling inspired and “at home.”

“Bowen had an impressive tuition and a high bar pass rate. Its campus size, part-time program, and location in the state’s capital were also attractive features,” she said. “It was a perfect mix for me. I remember thinking: Bowen is far enough from home so I could isolate and focus, but still close enough to allow for a relaxed commute.”

Shyteria began law school as a part-time student in 2017 and was expecting a child at the time. In October that year, she went in for a routine checkup and wound up being admitted to the hospital. She was still studying for finals in the delivery room.

“My doctors thought I took studying to another level,” she joked, “and I guess I did.”

Shyteria’s son, Aydin, was born that November. After a semester off, she returned to law school. Her family and son’s dad are located out-of-state in her hometown of Memphis, Tennessee, and outside of law school friends, she has no family support system here.

Law school as a single parent has been an adjustment.

“Being a parent is a beautiful, exciting gift, and it is also emotionally and physically exhausting, so it is a great role to adjust to. One of the biggest adjustments is having a little one who is completely dependent on me. It’s no longer ‘All about you,’” she said, “Single parenthood was not part of my plan–nor was it foreseeable–much less while in law school, but life changes can be unexpected.”

“I am a mother. And while I am the only parent in the home, and the load does get heavy, for me it has helped to focus on the village we have and how Aydin sees me through his eyes, rather than the title of single mother,” she said. “I’m also not completely alone. God’s provision has been with me from the beginning. I am incredibly grateful to have my law school friends, a few of whom are now alumni, who have either offered to watch Aydin so I could attend classes or would come over to our home and sit with him while I completed virtual final exams during COVID. To that end, being able to now attend classes from home has been a true gift too, as spending so much time away from Aydin was beginning to take a toll on me.”

Shyteria’s family and friends in Tennessee have also been invaluable, she says. Aydin’s grandparents have traveled from Memphis to sit with him during final exam sessions. When she traveled to Memphis, loved ones kept Aydin so she could study or have a short break.

“The positive encouragement from family, friends, Bowen faculty, and my therapist, whose services are offered through JLAP, as well as my mentor, has been paramount,” Shyteria said. “Having genuine people help in these ways is evidence of God seeing me through.”

Throughout law school, at various points, Shyteria also worked as a teacher here in the city, and recently, as a legal assistant for The Buchanan Firm, P.A. After working, she would pick Aydin up from daycare, take him to the sitter, travel to Bowen for classes, pick Aydin up from the sitter, and then travel home. Sometimes this routine meant meeting two friends, who also helped as Aydin’s babysitters, in Bowen’s parking lot before class began. This dedication to both her family and her studies caught the committee’s attention.

“The committee was impressed by her determination and persistence in the face of adversity,” said Jessie W. Burchfield, a scholarship committee member and an associate professor at the law school.

Shyteria said the experience has made her hone her skills in organization and productivity. In her application essay, she wrote about the intentional planning required to accommodate the busy and diverse schedules of a toddler and a law student.

“There is always a lot to juggle, and sometimes I feel guilty for even taking a nap,” she said. “But I am learning to be kind and patient with myself and to stay grounded in my faith.”

In addition to the one-time monetary award, the Carson Scholarship provides a mentoring network. Scholarship committee members (several of whom were also single parents while in law school) offer practical and emotional support to the student recipients. They work to encourage the students as they balance the demands of law school and the responsibilities of parenting alone. Shyteria is excited about that support.

“The support system of the committee matters just as much as the monetary assistance,” she explained. “Any parent could benefit from such a support system in law school.”

Shyteria will graduate in 2022. She wants to pair her education background and legal ability to work in juvenile law, criminal defense, constitutional law, and civil rights law. She plans to eventually be a juvenile court judge.

“No matter what changes may arise, though, with God’s grace, I am determined to be a successful law student, graduate, and mother,” she said