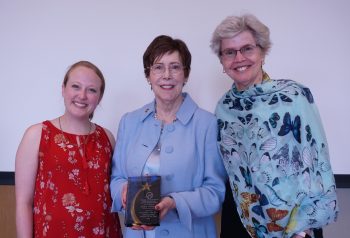 On April 12, 2022, the Arkansas Association of Women Lawyers–Law Student Division at the UA Little Rock William H. Bowen School of Law recognized pioneering attorney and Bowen alumna Carolyn B. Witherspoon. At a luncheon in her honor, the student chapter awarded Witherspoon the Justice Annabelle Imber Tuck Distinguished Woman of the Year Award.

“AAWL had a profound impact on me as a law student and then as a young female lawyer,” Witherspoon said. “There were very few female lawyers when I started out, and AAWL brought them all together. The organization provided opportunities for newer lawyers to gain mentors and develop leadership skills. I am proud to be a member.”

Witherspoon is one of the founders and directors of Cross, Gunter, Witherspoon and Galchus, an Arkansas law firm with offices in Little Rock and Fayetteville. She practices employment defense law and provides extensive training for employers. Witherspoon served as the first female President of the Arkansas Bar Association and is former Chair of its Labor and Employment Law Section. She is also a member of the American Bar Association, where she served as Chair of the Commission on Interest on Lawyers’ Trust Accounts and is a member of the Labor and Employment Law Section.

In addition to her work for clients, Witherspoon provides legal services to Arkansans in need through VOCALS — the Volunteer Organization Center for Arkansas Legal Services. She was an original founder of the Women’s Foundation of Arkansas and has served as its president. Witherspoon is on the Little Rock Sister Cities Commission and the Board of Directors for the Arkansas Symphony Orchestra. She was recently inducted into the Arkansas Women’s Hall of Fame.

“AAWL is honored to be able to present Ms. Witherspoon with our Distinguished Woman of the Year Award,” said outgoing student chapter president Caitlyn Brainerd. “Her efforts and contributions do not go unnoticed, and we are appreciative that she has paved the way for future women lawyers in Arkansas.”

The Arkansas Association of Women Lawyers is a service-based organization whose goals include furthering the interests of women lawyers and their service to the legal profession, advancing the administration of justice according to law, and aiding the courts in carrying on the administration of justice. The group encourages collegiality among women lawyers and provides a program of continuing legal education.

The student chapter works to foster collegiality among female students and arranges mentors from the AAWL parent chapter for its members. It also provides a social outlet for women in law school.

The Distinguished Woman of the Year award is named for Justice Annabelle Imber Tuck. A 1977 Bowen graduate, Tuck served as the first female justice elected to the Arkansas Supreme Court.  Now retired from the bench, she serves as a Public Service Fellow and Jurist-in-Residence at Bowen.

The AAWL student chapter presents this award each April to a woman lawyer who has made notable contributions to the Arkansas legal community. Nominations for next year’s recipient will open in February 2023.