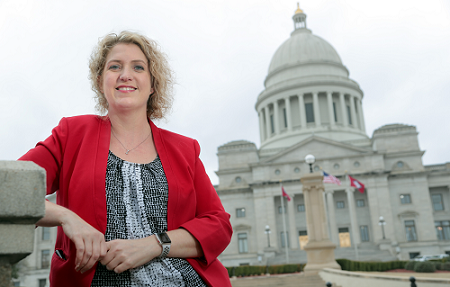 Ever since she was a little girl, Jennifer Davis, Arkansas’ first chief privacy officer, dreamed of becoming a lawyer.

“Law school has been something I always wanted to do, but life gets in the way,” Davis, of Bryant, said. “I had a family young; I had a job; I had an undergraduate and a master’s degree. I had success, but I was lacking a sense of fulfillment.”

Davis graduated from UA Little Rock in 2003 with a Bachelor of Science in information science and later from the University of Arkansas at Fayetteville with a Master of Science in operation management. She worked at some of the best companies in the state, including Dillard’s, Lockheed Martin, and Acxiom.

She found a passion for protecting personal data after someone stole her father’s identity in 2006. The identity thief went to another state with two non-photo pieces of identification and was able to get a driver’s license in her father’s name.

“This person had been arrested for driving under the influence, worked under my dad’s name, and had several hundred thousand dollars in medical expenses,” Davis said. “This spanned five years. Debt collectors found my dad, and all these discrepancies showed up on his credit report. It took a long time for us to get that cleaned up, and it was very difficult to file a police report.”

She also never gave up her dream of law school.

“I had considered law school again after I finished my undergraduate degree, but I always assumed that it was a full-time program where you don’t work,” she said. “I had a family and a job and responsibilities, so it wouldn’t have been possible without Bowen’s part-time program.”

When Davis found out about the William H. Bowen School of Law’s part-time program,  she took it as a sign that it was time for her to go after her dream. With the encouragement of her husband, Dwayne, Davis started at Bowen in 2009 when her daughter, Taylor, was a senior in high school. Although she recalls being “terrified” when she first started, Davis quickly found a new group of friends and loved the new style of learning.

“They told us at the beginning of law school to look around because these would be some of the best friends we would ever make in our lives, and that is absolutely true,” she said. “There is a small group of us, and while everyone has gone their separate ways, we are still very close all these years later. One of the best parts of law school is the people. I have called on several of my professors for resources and assistance over the years.”

She recalls one of the lectures from her first week of law school – that she was going to learn to think like a lawyer.

“I didn’t know what that meant at first, but changing the way you think is one of the most important things about law school,” she said. “The public speaking, the writing, and the analytical thinking skills, it all helps us be better professionals. You can’t turn it off. It just becomes who you are.”

While at law school, Davis found success and earned top paper awards in intellectual property and real estate transactions. She also served as online editor of the UA Little Rock Law Review and worked as a research assistant for one of her favorite professors, Lynn Foster. She also served as a law clerk for Gill Ragon and Owen; Kutak Rock; Friday, Eldredge, and Clark; and the Arkansas Department of Information Systems (ADIS).

“While I enjoyed working in firms, I knew it wasn’t for me.” Davis said. “I got hooked up with the Department of Information Systems through the government careers panel at Bowen. I almost didn’t go, but I took my lunch hour at Acxiom to go over and meet with the ADIS general counsel. That meeting was fortuitous. That introduction shaped a lot of what I wanted to do after law school. I really like working in government, dealing with legislative and administrative aspects.”

After graduating from Bowen with honors in 2013, Davis worked as a law clerk for the Arkansas Department of Information Systems while she prepared for the bar exam and then awaited the results. After being admitted to the bar, she worked for ADIS for one year as a state systems specialist followed by four years as an attorney with the Arkansas Department of Education, where she advised the education commissioner and state Board of Education regarding laws, rules, and procedures while representing the Department of Education in ligation matters.

As the state’s chief privacy officer, Davis is responsible for ensuring agency compliance with laws governing privacy and access to protected data and to assure that the use of technology does not erode privacy protections related to disclosure of personal information.

Because Arkansas is only the eighth state in the country to hire a chief privacy officer, Davis has a lot left to discover about her new role. Her law school education helps her explore the unknown regions of the job.

“My role as the chief privacy officer involves working with all the agencies in the state,” she said. “Being in law school and having such a variety of classes makes it easier to understand what the other agencies do. My real estate classes, for example, help me understand when I am talking with the real estate commission. A lot of the professors are local experts. Having them here and having access to them has been an asset while working in state government.”

For anyone who is considering law school, Davis has the following advice.

“For anyone who is contemplating law school, they should do it,” she said. “I had a great time at Bowen. I have a picture at my home of my law school graduation that I keep on my dresser in a frame. I see it every day, and I am always reminded by how much I love my family and how much I loved my time at Bowen. It was one of the best decisions I ever made, and I am glad my husband finally convinced me to do it.”

In the end, Davis is thankful for her law degree, which she uses in every aspect of her professional and personal life.

“I don’t think there is any role in which someone with a law degree won’t use their degree. You use it in everything, personal and professional,” Davis said. “I monitor legislation from a privacy perspective and a legal perspective. When we bought a house, I understood every waiver I signed.”