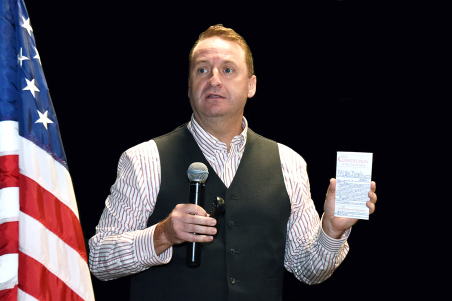 The next time you listen to a rapper, pay close attention to the wordplay because there may be a lesson about the United States Constitution in the rhyme.

“I believe that hip-hop artists from the jump have been critiquing the U.S. Constitution in a way that makes sense,” said Professor andré douglas pond cummings, an associate professor of law at the UA Little Rock William H. Bowen School of Law, during a Sept. 17 speech at the University of Arkansas at Pine Bluff.

Professor cummings, a graduate of Howard University’s Law School, addressed the student body during UAPB’s Constitution Day program. The California-born lawyer and author outlined how “slavery is embedded in the Constitution” and the way the document has been interpreted to oppress Black Americans.

“I love this Constitution, but I don’t worship it,” cummings stated.

Growing Up Near South Central

As a teenager growing up in Southcentral Los Angeles in an area that “straddled the ‘hood,” cummings recalled having friends who were “surfers” as well as friends who were African-American and Polynesian and “looked like the hip-hop group N.W.A.” According to cummings, both groups of teenagers used marijuana.

“My white surfer friends were never stopped by police,” cummings shared. It was a different story, though, for his friends who were Black. He remembered being stopped one night and ordered out of his car along with the three Black teenagers riding with him and forced to stretch out on the ground while police removed the seats from his car in a clear illegal search and seizure. “If you just think for a moment, if those surfers got thrown down and locked up, what would those parents have done?” queried cummings. “They would call the mayor…the police chief would be fired and the War on Drugs would have been over.”  It was this unfair application of the law that forged cummings’ determination to become an attorney.

The Trauma of Neighbors

cummings cited the trauma of the inequities prevalent in law enforcement, making the case with rapper Meek Mill’s song, “Trauma.”

Uh, my mama used to pray that she’d see me in Yale
It’s f***** up she gotta see me in jail
On the visit with Lil Papi, it hurt even though I seemed to be well
They got a smoker with a key to my cell, damn

And even worst, my judge black don’t wanna see me do well
It’s either that or black people for sale . . .

The ambulance, they coming baby, just breathe
That’s what the old lady said when she screamed

This nightmare on Elm Street, Friday the 13th
And in the 13th Amendment, it don’t saw that we kings
They say we legally slaves if we go to the bing

cummings explained, “I don’t know many 13, 14, 15-year-old kids who are reading the Constitution, but they’re listening to Meek. And, he’s teaching them that the 13th Amendment, in my opinion, is jacked up.  And, he’s suggesting that adverse childhood experiences that impact children are harming their ability to have bright futures, and live long productive lives in the country.”

The 13th Amendment to the Constitution outlawed slavery unless the person is imprisoned. cummings and other critics of that portion of the Amendment suggest it is a significant factor in the mass incarceration of Black men.

According to cummings, Rapper J. Cole took on the Fourth Amendment and the issue of illegal search and seizure with his hit, “Neighbors.”

Wait, I think police is at the door

Every n***a feel like a candidate
For a Trayvon kinda fate
Even when your crib sit on a lake
Even when your plaques hang on a wall
Even when the President jam your tape . . .
I can’t sleep ‘cause I’m paranoid
Black in a white man territory
Cops bust in with the army guns
No evidence of the harm we done
Just a couple neighbors that assume we slang
Only time they see us we be on the news, in chains

Cummings urged students to “stay woke” and get involved, working to harness the “political willpower” to change the Constitution. He pointed to sections of the Constitution that are mostly irrelevant but remain in the document: Article I, Section 2 of the Constitution refers to Black Americans as 3/5ths of a person and the Fugitive Slave Clause contained in Article IV, Section 2 would permit a slave owner to pursue an escaped slave who fled to a free state for a return to enslavement.

University Instructor, Felicia Cooper, listened to cummings speech with the same rapt attention that students did.

“It was very interesting to hear and see a Caucasian discuss hip-hop and the Constitution,” she said. “It afforded us an opportunity to relate it to the past and present and to gain insight on what are some of the solutions for the future. It is important for us to be woke!”

As his speech ended, cummings emphasized, “I don’t want you to be depressed about this, I want you to recognize that hip-hop, in my opinion, offers a powerful critique of the state…and, we can change the way the state does its business.”

This article was written by Vickie Newton for UAPB News on Sept. 23, 2019. Reprinted with permission.